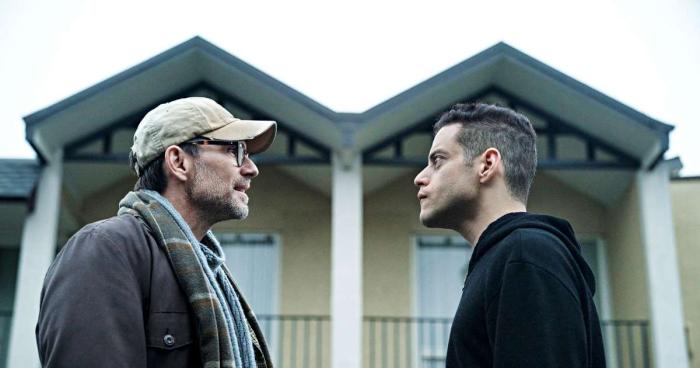 There have been hints since early on that sci-fi developments could be at play on Mr. Robot, teases that Angela’s mom could still be alive or, more recently, that Angela herself could still be alive, even though we all saw her die. However, up until this week’s episode, “eXit”, we mostly chalked those suggestions up to the manipulations of Whiterose.

Now we know that Whiterose wasn’t f**king around. The device in Washington Township that she has been alluding to for several seasons finally availed itself, and this is what it appears to do: It flings Elliot into a parallel universe where a different Elliot — let’s call him F-Elliot — is happy and stable, poised to marry his childhood sweetheart, F-Angela, whose mother is still alive; while F-Elliot himself has a loving, functional relationship with his own father, who runs a successful computer repair store, Mr. Robot. F-Elliot is the CEO of a cybersecurity firm, AllSafe, that is about to make a deal with F Corp, which is run by Tyrell Wellick, a less stylish more nebbish version of the Wellick we know from our universe.

How it happens is not entirely clear, and this late in the game, Sam Esmail doesn’t seem to be all that interested in providing the details. Elliot returned to Washington Township to destroy the device by installing malware on it, but Whiterose had already anticipated and blocked those efforts. However, because Elliot took down Deus Group and their money, Whiterose couldn’t make proper arrangements to use the device, so she had to use power from a nuclear power plant’s cooling system to make it work. This causes a nuclear meltdown, which presumably decimates Washington Township and the surrounding areas, like Philadelphia.

Not that Elliot is around to see it. Before the device accesses a parallel world, Elliot and Whiterose get into a debate about who hates people the most — Whiterose wins, because clearly Elliot does — that ends with Whiterose blowing her brains out before the nuclear meltdown. Elliot and Mr. Robot end up just hanging out for a few minutes, awaiting the end of their lives. “It’s an exciting time in the world,” Elliot says, bonding with Mr. Robot seconds before their death. Everything goes to black.

When light returns, a parallel world F-Elliot wakes up and readies himself for the day, although he’s bothered by a headache and a few flashing visions of the other universe. He gives no attention to the earthquake that happened overnight. In New Jersey.

After an uneasy day, however, F-Elliot returns to his cheery apartment and finds our Elliot sitting at his desk. “Who are you?” F-Elliot asks Elliot. That’s the question, isn’t it? Who is it? Did Elliot really access another dimension? Or is this all somehow part of Elliot’s dissociative disorder? Is F-Elliot really just Elliot’s other alter? Or is the Elliot we’ve been watching for four seasons really just the alter of the functional, happy F-Elliot, a manifestation of his denial? Or is this all just an elaborate dream sequence? I don’t trust that a show about a character with multiple personalities can also be a show set in multiple dimensions.

In any respect, the preview for this Sunday’s two-hour season finale doesn’t help one little bit.

— In this parallel world, Darlene either does not exist, or she is dead.

— In the parallel world, Whiterose doesn’t appear to be evil, but she is the wealthiest woman in the world.

— The question I have is this: If the device provides access to another universe, and traveling to that other universe is all that Whiterose has ever wanted, why does she kill herself only minutes before she is transported?

← What The Hell Happened to 'American Gods'? | 'Home For Christmas' Review: Netflix's Best Holiday Rom-Com Is A TV Show →