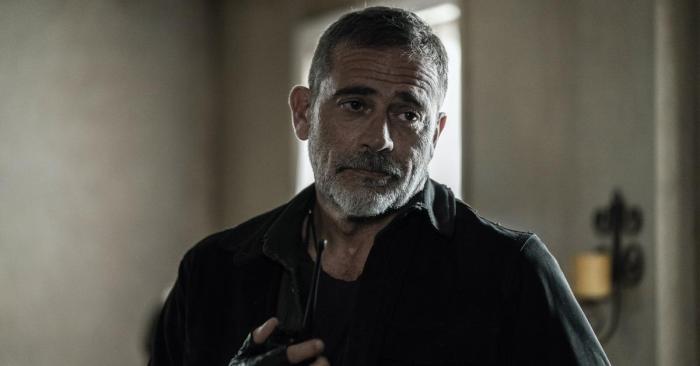 In Robert Kirkman’s The Walking Dead comics, Negan’s story arc goes something like this: Negan arrives, he kills Glenn, he leads the Saviors in the interminable All-Out War, he loses, Rick imprisons him for years, he gets out and saves Rick’s life and helps defeat The Whisperers before basically disappearing. He is not involved in the Commonwealth storyline, and we find out in the final issue that he lives as a hermit, visited occasionally by Carl Grimes.

With so many other characters leaving the series, and with Jeffrey Dean Morgan being as popular as he is on The Walking Dead, banishing him into the woods was out of the question for the televisions series. He’d have to be around for the Commonwealth storyline. A few weeks ago, there was a nod toward his original ending when Negan left the Alexandrian group out of a justified concern that Maggie might kill him.

He’s back now. The character disappeared for several months in The Walking Dead time only to resurface last week as a member of another group, the Riverbenders, a “religious group” (for show) holed up in an apartment building. The Commonwealth — aided by an unwitting Aaron and Gabriel — tried to take it over, which led to a split between Aaron and Gabe and a group of rogue Commonwealth soldiers working under Lance Hornsby and his former CIA henchman, Toby Carlson.

In this week’s episode, Toby Carlson is tossing Riverbenders off the roof of the building and to their deaths, one by one, in an attempt to coerce them into telling him the whereabouts of a weapons stash. Negan arrives in time to save Gabriel, while Aaron flees and retrieves Maggie, Lydia, and Elijah. They all return to provide help to the Riverbenders, reuniting Maggie and Negan once again. She’s not particularly happy to see Negan, but she finds out along with the rest of us that Negan is now a family man. He’s married to a Riverbender, Annie, and like everyone else, they’re just trying to get by.

Maggie and Annie separate from the main group to take out Toby Carlson, which is when Annie tells Maggie that she’s pregnant with Negan’s baby and once again insists that Negan is a changed man. Meanwhile, Hershel Jr. — Maggie’s kid with Glenn — makes a surprise appearance in the apartment building, and hell if it isn’t Negan who ends up watching over him. Maggie is left with no choice but to let Negan protect Hershel. “Don’t let anything happen to him,” she tells Negan over a walkie-talkie. “They’ll have to kill me first,” he responds.

What transpires, however, is an unexpected conversation: Hershel, who is about eight or nine years old, deduces that Negan is the “bad man” who killed his father. Negan, who has always been good with kids, admits as much. Hershel pulls a gun on Negan. Negan gets it. He understands why Hershel Jr. would want to kill him, but he asks Hershel to hold off, not for Negan’s sake, but because shooting him would attract a lot of unwanted attention and put many lives in danger. Hershel Jr. puts down his gun; Maggie, Negan, and Company take out Toby Carlson and the Commonwealth soldiers, and Negan circles back around to Hershel and lets him know that they have some unfinished business that Negan is willing to settle in a few years’ time.

Meanwhile, outside the Riverbend compound, someone is picking off Commonwealth soldiers, and the camera slowly pans up to reveal that it’s Daryl’s ex-girlfriend, Leah, who is pissed off and presumably dead-set on finding and killing Maggie, who shot and killed the remaining members of Leah’s group earlier this season.

Elsewhere in the episode, Sebastian sends Daryl and Rosita on a suicide mission to retrieve a stack of cash sitting in a safe in a panic room surrounded by thousands of walkers. Cash still has value in The Commonwealth, and Sebastian, the series’ most detestable character, wants it because his mom, Governor Milton, cut off his allowance. Daryl and Rosita reluctantly agree, but only because Sebastian threatens to kill their kids. They retrieve the cash but get stuck in the panic room and have to be saved by Carol and Mercer, the leader of the Commonwealth police force, who appears to be warming up to the resistance. In fact, Mercer himself kills Sebastian’s men.

When Carol confronts Lance Hornsby and tells him about the suicide missions that Sebastian has sent several people on, Hornsby is nonplussed, much to Carol’s chagrin. “Look, this place works because everyone plays their part,” he tells Carol. She smiles agreeably and says she gets it. “You’re either part of the problem or part of the solution.” When she turns her head to leave, however, Carol looks as though she cannot wait to throw Hornsby into a pack of zombies.

Next week, we’ll find out what happens when Daryl — who is increasingly anti-Commonwealth — surrounds Maggie’s Hilltop as a Commonwealth soldier.