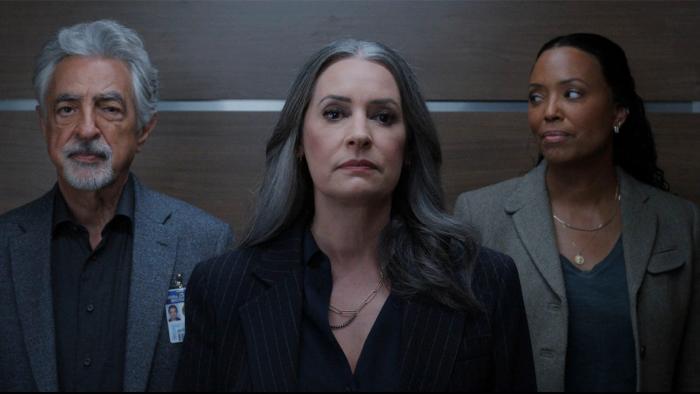 [WINTER. A CANADIAN SUBURBAN TOWN IN ONTARIO USED FOR LIFETIME AND HALLMARK HOLIDAY MOVIES. A GAZEBO LOCATED IN THE TOWN’S MAIN SQUARE. IT’S ACTUALLY A SOUNDSTAGE, BUT LEFT THERE YEAR-ROUND]

OK, but other than hate-watching Ginny & Georgia, Willow and Emily in Paris or watching films by Béla Tár* on repeat, what else have you been watching?

No, I told you I was watching Tár* on repeat… well, I’ve been binging Criminal Minds in random order, while I catch up with the weekly episodes Criminal Minds: Evolution.

Oh no! Please tell me they didn’t come with yet another terrible spin-off?

Don’t worry! It’s actually a revival… or sequel? of the original series. And I don’t see why you complain about terrible spin-offs to procedurals, playing corpses and extras in those is our bread and butter!

Yeah, but I can’t namedrop those terrible spin-offs when I’m trying to hook up with LA influencers. Nobody would want to watch them.

Dude, LA influencers today are too young to even be aware of what’s on Network TV. Criminal Minds: Crossing Borders is just as alien to them as The Golden Girls.

Whatever, but tell me, what’s the deal with Criminal Minds: Evolution? Also, why didn’t they call it Evilution?

To answer the latter, they already used Evilution in the title of a second-season finale. Also, they would have to pay rights to the developers of a very good DOOM Mod. But to answer your question, Criminal Minds: Evolution is the badder, grittier, and more cinematic upgrade of the original. Since it’s on a streaming platform (Paramount+ in the US, Disney+ in other markets), they can drop f-bombs, it’s gorier and more violent. It’s currently halfway through a ten-episode season.

Oh, so they’re trying to do Mindhunter. Got it. Why a revival now, though? Didn’t Criminal Minds end in 2020?

Because the series has been doing gangbuster numbers on streaming platforms, and Paramount+ needs the cash. Matthew Gray Gubler hasn’t returned though.

Well, that sucks. So… what’s the plot this time?

You know how during the Pandemic we all went a little psycho? This one starts from the premise that actual psychos tripled down, and using the internet, they started connecting and coordinating with each other to bring chaos and misery to the world.

Oh, so it’s about the former guy’s fans, QAnon, and January 6th?

No, of course, not! They wouldn’t dare be that political. The show opens with the discovery of a container that was used as a torture chamber, filled with bodies collected over the last two decades and other crazy psycho material. The main villain of this season is one Elias Voit, played by our boy Zach Gilford. The guy is a tech genius psycho, but not of the kind that starts new social media platforms, but the kind that is in charge of digital security and stuff. Using his skills and wealth, the guy has created a sprawling network of psychopath followers he, well, he mentors and equips by giving them a suitcase with psycho tools. Plus, he does some killing of his own. That way, they can have stand-alone episodes under an overarching plotline. Best of both worlds.

Hold on, hold on! Isn’t that the same exact premise as The Following?
Yes, but unlike that daring work of anticopaganda (which had the balls to represent the police and Feds as incompetent), this BAU is able to get breakthroughs relatively early. In time, they will run into a former spec-ops guy who managed to infiltrate the network. His sister disappeared years ago and he always suspected a serial killer. He starts having a will-they-won’t-they with Penelope García.

Wait, Penelope is back? Didn’t she leave the BAU for a startup? Also, didn’t the finale for the original series set her up in a potential romance with Luke Alvez?

She is brought back into the fold because one of the psychos in Voit’s network managed to infiltrate a sort of Facebook for teenagers she created. Apparently, Penelope and Luke fizzled out sometime between the finale and the reboot.

Sad. And what’s become of the other characters?

Prentiss is now the head of the BAU, but she has the FBI’s Deputy Director pestering her about the BAU’s expenses.

He might have a point. Didn’t they blow up their own Gulfstream in the finale? And what about J.J. and Dr. Lewis?

They are both at a good point in their lives: Lewis has a new and serious girlfriend (Nicole Pacent), J.J.’s marriage is happy and strong, and Prentiss is annoyed she’s the only one not getting laid.

Wait, you’re telling me Prentiss can’t get any?

You think dating in LA is bad, imagine how it is in the DC Metro. Unfortunately, the series has been telegraphing to us that something BAD is going to happen to J.J. First, her hubby getting a cancer scare that luckily was false. But then … well, in the mid-season finale …

Wait again! You haven’t told me what happened with Rossi.

Oh, poor Rossi. The series opens with him despondent and being a complete mess. Krystall, his third and fourth wife, has died. In a pretty traumatic way.

NO. NO WAY. NOT AGAIN. THEY FRIDGED YET ANOTHER SIGNIFICANT OTHER? ANOTHER ONE?

Yep. But this time it was cancer. I know, not the first of his ex-wives that dies from a chronic disease. What more can I say, the showrunners don’t want Rossi to be happy.

Jeez. Also, no explanation as to why Reid is no longer on the team?

Just that he’s on a “classified assignment”. Meanwhile, Voit’s stressors are piling up, and you know how Criminal Minds adheres to the Killing Joke theory of psychos, in that one bad day can turn any normal weirdo into a bloodthirsty monster. In Voit’s case, the BAU is closing in, but most importantly, he’s running out of money and he has a family to support.

Wait, how is he running out of money? Isn’t he supposed to be a C-Suite tech exec?

He is buying a house on the West Coast.

So, in the mid-season finale, the BAU finds one of his containers/torture chambers all the way down in Georgia. J.J. and Alvez are dispatched to check it out … and turns out there’s a bomb inside. It goes off and we are left not knowing if they’ll actually pull an HBO, killing a main character, or if it’ll just be a fake-out. But as I said before, there’ve been showing signs that something BAD might happen to poor J.J.

Actually yeah, it does work to keep you engaged and it can actually shock you. The biggest problem with Criminal Minds is that it’s the kind of show you can have playing in the background… but with content that is supposedly much more disturbing than your average Law & Order. Still, this revival is fun.

Ok. One more thing. You said this one is more cinematic in style. Does that mean they actually make an effort to film on locations and not just trying to make California look like the East Coast?
[LOUD LAUGH] Of course not!

[A SPEAKER CALLS ALL EXTRAS TO GET READY FOR THE FLASH MOB SCENE. THEY PUT ON ROLLERSKATES AND STUMBLE OUT OF THE GAZEBO]

Criminal Minds: Evolution returned with the back half of the season yesterday.