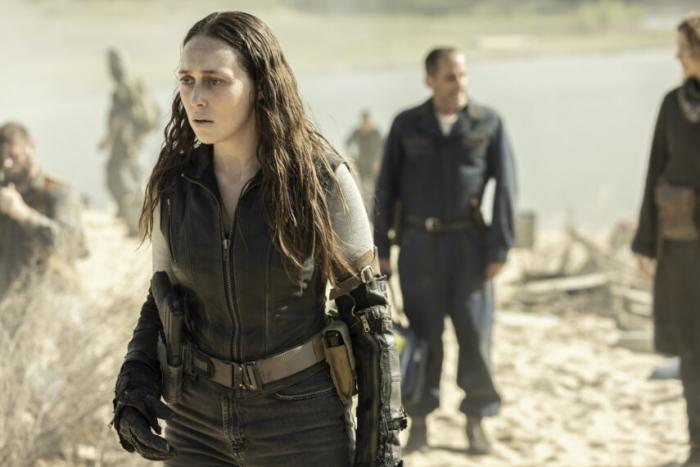 Spoilers
Alycia Debnam-Carey is the only Fear the Walking Dead cast member that has been with the series, uninterrupted, since the pilot episode (and one of only three remaining from the first season). On this week’s episode, “Amina,” her character, Alicia, was written out of the series. For the actress, “it was time.”

It was the 100th episode of the series run, and I cannot emphasize how awful it was. The showrunners couldn’t muster a decent send-off for the series’s longest-running (and arguably best) character on their milestone 100th episode. Worse: They couldn’t force themselves to make it unambiguous. I cannot imagine any scenario in which Alycia Debnam-Carey — who has a Hulu series in production — will want to return to Fear or a Fear spin-off, but AMC apparently could not snuff out hope for the scant few remaining Fear fans who will probably spend the rest of the series’ run speculating about her return.
It’s not happening.

Some brief context: In the midseason finale, Alicia was bitten in the arm by a zombie. She managed to cut off her arm, but not before the infection took hold. Unlike every other character in the history of The Walking Dead universe who was infected by a zombie, Alicia did not immediately die, and I would venture that some believed that plot armor would protect her again (she survived what she thought was a lethal dose of radiation poisoning in season 5, but it was never mentioned again).

For the last seven episodes, Alicia has stumbled around with the infection, experiencing high fevers, and frequently passing out.

At the end of last week’s episode, Alicia passed out on the roof of a tower that was burning and also surrounded by hundreds of radioactive zombies. She and her friends were left trapped between a horde of zombies and a burning building, but this week’s episode just skipped over the part where they escaped an impossible situation. After a fantasy sequence — much of this week’s episode takes place in Alicia’s fantasy land — she’s seen being carried away from the fire on a gurney by her friends. However, a little girl whose face is covered by a masked helmet — a little girl we later learn is an imaginary younger version of Alicia — convinces her to go back to the Tower to save her “friend.”

Who is that friend? We eventually learn that it’s Victor Strand (Colman Domingo), who spent the entire season as Alicia’s nemesis, who killed several of Alicia’s friends, and who in general became the season’s main villain. But a dying Alicia went back to save him, which is to say: Her character’s death is used not to celebrate her character, but as a shorthand to redeem Strand. If Alicia cared enough about him to return for him, well, Strand is worth saving, right? Strand does a lot of crying in this episode (Domingo is an excellent actor, but that would not be apparent from this episode), but eventually gets on a raft and floats away from the radiation fallout with the rest of the remaining Fear cast, which is something THEY ALL COULD HAVE DONE 15 EPISODES AGO INSTEAD OF AMASSING ARMIES TO FIGHT IN A WAR THAT WOULD NEVER ARRIVE OVER A USELESS BUILDING IN A NUCLEAR FALLOUT ZONE.

To reiterate: The entire seventh season was spent trying to claim a building surrounded by radiation controlled by the villainous Strand, and over the course of one episode, the season is essentially undone: The Tower burns down, they all leave the area, and Strand’s villainy is reversed. There is even a suggestion that Daniel — who has been suffering from dementia — may have gotten most of his faculties back.

Alicia — who has been following a goddamn bird around the entire episode (it’s a metaphor!) — decides to stay back and use her remaining time to warn people away from the burning tower because I guess the black smoke wasn’t warning enough. She’s pale and feverish and looks close to death. She lies down on the beach to die.

Later, she wakes up. Her color has returned. She’s feeling great, and she uses the bullet she had been saving to shoot herself before succumbing to take out a zombie. Is she dead, and is this a fantasy world? Or did she magically wake up feeling 100 percent better?

That depends, I suppose, on whether the Fear producers can coerce Alycia Debnam-Carey into returning at some point. She’s clearly dead, but they just couldn’t bring themselves to close the door on her character. Even in the featurette after the episode, the showrunners — after saying that this was Debnam-Carey’s final episode — couldn’t say, “Alicia is dead.”

Alicia collapses, seemingly succumbing to the fever. She wakes up seeing this bird flying over her. And I think it’s open to interpretation whether or not that bird is really there, whether or not she really freed a bird from the Tower, or whether that was all part of her subconscious. And, if it was, maybe this is just her subconscious trying to guide her once again. And we really wanted to build this kind of reawakening of Alicia, where she has been through this incredible journey and is now standing up and is going to be walking into kind of a new world with a newfound strength… Alicia believes she has beaten this thing, Alicia thinks she’s going to live… Then we see her walk off as a triumphant hero.” 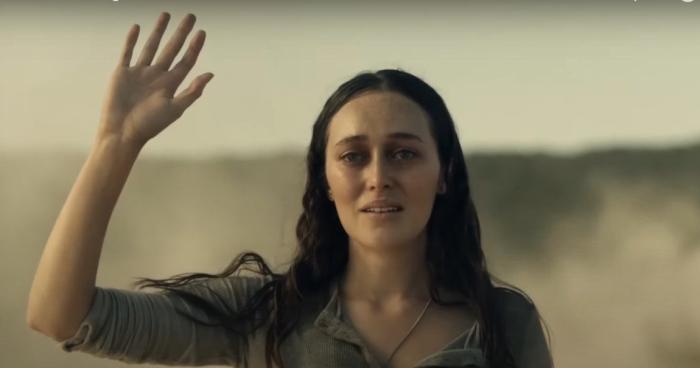 Is her character dead? Maybe! Is Alycia Debnam-Carey returning to the series? No! Not unless her career stalls out and five years later, she decides to return to the 12th season of a neverending series. Speaking of which, Madison (Kim Dickens), who died in the fourth season, will return in next week’s season finale and for some goddamn reason, they had to kill off Alicia before she could reunite with her mother, which might have provided this season with a single moment of emotional resonance!