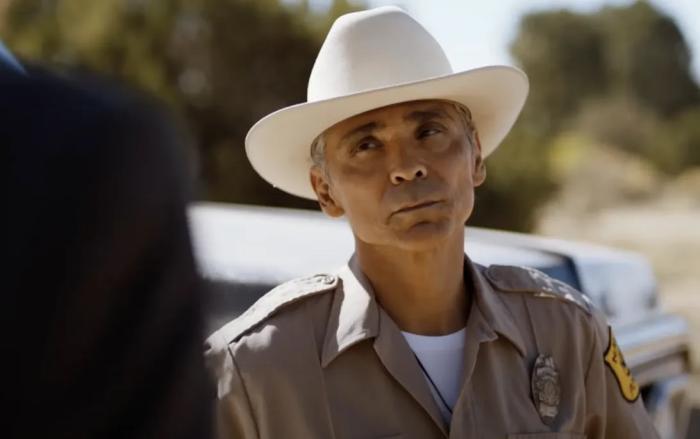 Set in 1971, AMC+’s Dark Winds opens with a thrilling heist: A helicopter drops into traffic on Main Street in Gallup, New Mexico, in front of an armored truck. The helicopter’s passengers jump out, blow up the truck, kill the two security guards, grab the loot, and jump back into the helicopter. The helicopter flies into the desert of New Mexico and is spotted by a Navajo elder before disappearing over the ridge. Three weeks later, the elder is murdered along with a young Navajo girl helping the old man seek the help of a nearby healer.

It’s a six-minute cold open that sets the stage for a captivating six-episode series starring Zahn McClarnon as Lt. Joe Leaphorn, who runs a police station on a Navajo reservation and is tasked with investigating the murder of the elder and the young girl using his limited resources and manpower. Agent Whitover (Noah Emmerich) of the FBI, meanwhile, inserts one of his agents, Jim Chee (Kiowa Gordon), onto the reservation posing as a young cop returning home for a job on Leaphorn’s force. We soon learn, however, that Chee is playing both sides — at least initially — aiding in the murder investigation on the reservation in order to gain information to solve the helicopter heist for the FBI. Lt. Joe Leaphorn immediately realizes what’s up but exploits Chee’s resources in the FBI to help him solve the double murder on his reservation.

The premise is instantly compelling, but it mostly acts as an entry point into the series’ richly defined characters, characters that AMC+ hopes will keep viewers returning for multiple seasons of the show based on Tony Hillerman’s mystery novels (the series has already been picked up for a second season). It’s good, solid, comfort television, not unlike Longmire (which also starred Zahn McClarnon) but in the inverse — here from the perspective of the tribal policeman.

Though Tony Hillerman was not Native, the series itself — like Reservation Dogs (also featuring McClarnon as a cop) and Rutherford Falls — is populated with Native Americans, both in front of the camera, in the director’s chair, and in the writers’ room, and it’s apparent in how the series approaches Navajo customs and traditions, including some supernatural elements that play into the investigations.

The series is unfortunately timely, as well, airing on the streaming network after the Supreme Court continues to take away the sovereignty of Native lands. Mostly, however, it is a terrific, well-deserved showcase for longtime character actor McClarnon. He manages to be expressive without relying on facial expressions, and though his character lacks the humor of his Reservation Dogs role or the scene-stealing wit of his Longmire character, there’s some warmth beneath his steely demeanor. Kiowa Gordon’s Chee, meanwhile, brings to the series a little heat, even if he is stuck in a C.H.I.P.S.-era police uniform.

Murder mysteries with compelling hooks too often fall apart as the investigations get underway and the stories drift into character digressions, but Dark Winds works in the opposite. The mystery loses none of its intrigues even as it becomes clear who is behind the murders, but it’s the character digressions that keep us riveted from one episode to the next. The dialogue is occasionally clunky, but the series is so tightly written that it hardly seems to matter as long as the transfixing McClarnon continues guiding us through it.

← Zelda Williams Will Direct a Zomb Com That's Decidedly Not 'Warm Bodies,' Thank You | 5 Shows After Dark: 'This is Going to Hurt' on AMC+, 'Chrisley Knows Best' on USA →