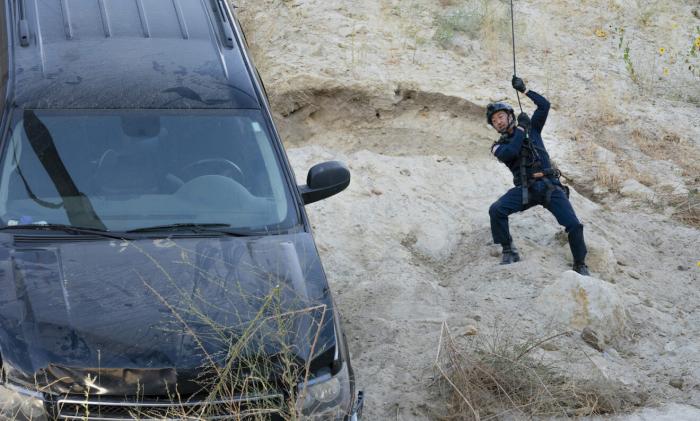 Last season I mentioned that I wanted to use header images of Chim as often as I could, because he’s the absolute best, sweetest, magical unicorn person on this show — and yet, so far this season, he hasn’t been given a whole lot to do. So for those of you wondering how Chim’s doing, look above. He’s rappelling down cliffs to pull children out of dangling SUVs. He’s a HERO. As usual, the cliff rescue isn’t as far-fetched as you might imagine — it seems to happen all the time in California (twice in one week in Monterey County just this summer!).

As for his personal life, Chim is settling into his relationship with Maddie, but it’s not all smooth sailing. During dinner one night, Maddie accidentally drops a plate and gets spooked, leaving Chim’s apartment in a panic. She’s still processing the emotional scars her abusive ex-husband left her, and in a rather lovely scene, Chim comforts her. We all have triggers — things that transport us mentally and emotionally to traumas in our past. No matter what, she doesn’t have to hide those reactions from him. It’s a great moment, but what Chim doesn’t realize is that Maddie has found another outlet for her emotions: Vigilantism. She received a 9-1-1 call from a woman who hangs up abruptly when her husband comes home — and it turns out that same number has a history of repeatedly dialing 9-1-1 and saying nothing. Maddie is convinced the woman, Tara, is a victim of domestic violence, but she can’t take any official steps until the woman actually asks for help. So instead… Maddie goes undercover. She asks Athena to do a background check on the husband (Scott Speiser, who played Overkill on The Tick!), but he has no previous record of assault. She also goes to Tara’s workplace to strike up a relationship with her, which isn’t hard because she’s a personal trainer at a gym. Finally, she dons a hoodie and starts staking out Tara’s home, nearly running over the husband with her car before she came to her senses and drove away in tears.

Y’all, Maddie is not OK, and this is a plotline that’s gonna carry over until Maddie either tells Chim what she’s going through or gets herself in trouble.

Speaking of trouble, Buck’s about to cause all KINDS of trouble for the LAFD — and Bobby, specifically. Since he’s still not able to go back to work as a firefighter, Buck is filling his time as a fire marshal — not as a Mormon, as I originally thought based on his shirt-and-tie combo:

He seems healthy and happy, and he even defends his former team when an ambulance-chasing lawyer comes sniffing around for dirt, hoping to sue the city because Bobby’s team took too long to clear a building during a fire drill. Buck isn’t gonna snitch on his family — or at least that’s the plan, until he finds out that Bobby is the one who personally refused to clear him for active duty. Buck may feel healthy, but he’s still on blood thinners, and Bobby has to think about what’s best for Buck and what’s best for the rest of the team, who will be relying on Buck to have their backs during an emergency. To make matters worse, Bobby already brought in Bosko (Ronda Rousey) as Buck’s temp replacement, meaning Buck feels extra betrayed and I’m gonna have to watch Bosko flirt with Eddie for who knows how many more episodes while my ovaries slowly die from boredom (Buck is the only one allowed to flirt with Eddie while working out, dammit!).

By the end of the episode, Buck shows up on Bobby and Athena’s doorstep to personally inform them that he plans to sue the city — and Bobby personally — for wrongful termination. Sure, he thinks he’s just doing whatever it takes to get his job back, but here’s the thing: He’s DUMB. He’s lashing out because he feels betrayed, not because Bobby has actually done anything wrong. Workplace lawsuits like this happen all the time, for good reason, but this specific case will ultimately lead to a no-win scenario for Buck. If he loses the case there’s no way he’ll ever be hired as a firefighter again in Los Angeles, and if he wins he’ll be working with the “family” he just betrayed. Worse yet, until the matter is resolved, Buck has to cut all ties with his buddies — and you know what that means:

No more Buck the babysitter! Who will take care of Christopher, Buck? HAVE YOU EVEN THOUGHT THIS THROUGH?

Meanwhile, Hen is over here just trying to have a baby with her wife, reminding us all that Chim isn’t without competition when it comes to being the best. Next week I’m hoping for less character stupidity and more crazy emergencies, and it seems like I’ll be in luck… oh wait, they’re going to a duck slaughterhouse? I FEEL ATTACKED.

← 'Mr. Robot' Recap: Who Is Vera? Who Is 'The Other One'? | 5 Shows After Dark: 'Treadstone' Premiere on USA, 'Battle of the Fittest Couples' on Paramount →