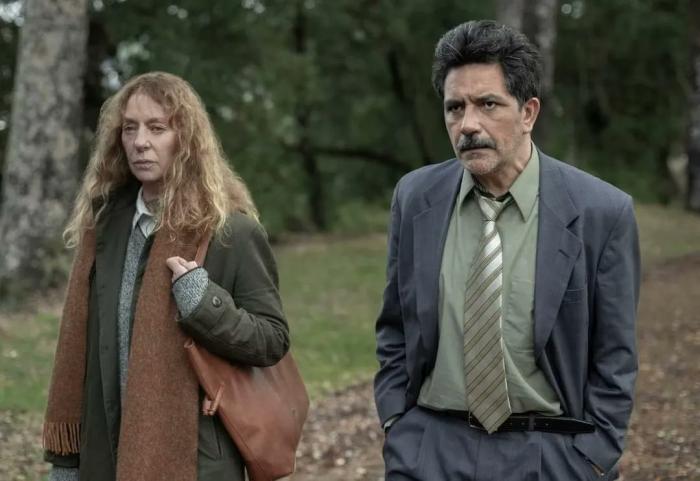 OK, there might be a conflict of interest with me reviewing what might be the first Chilean series easily available on an international platform (if s not, as with most countries where media is mostly state-funded, you can find a ton of stuff on YouTube). But let me assure you that I will be as objective and stern as I can possibly be, even though 42 Days Of Darkness is a veritable Avengers assemble of my favorite Chilean actors. Just one little thing please:

OK, now that I have that out of my system, let’s dive in:
The first thing you need to know is that this is a true-crime story. In June of 2010, with the entire country distracted with the World Cup, one Viviana Haeger disappeared from her upmarket gated community in Puerto Natales, a gorgeous small town in the Lakes Region. White, upper-middle-class women don’t usually disappear in Chile, at least not in Democracy, so you might imagine the media frenzy that followed the case. Except, as I mentioned before, it happened concurrently with the World Cup, so it made the headlines, but on the sides. Her husband claimed he had received a phone call demanding a ransom, but her case was never investigated as a kidnapping (fake-kidnapping scams were very common back then). Then, just forty-two days later, she was found by her husband in an attic, partly decomposed and partly mummified.

Weird, right? Other than one of the biggest f**kups by Chile’s Investigation Police (and there’s a lot of competition there), the case was eventually ruled as a suicide. Did I mention these were upper-middle class, well-connected people?

Of course, it didn’t make sense at all. It took six years before a new clue was found and a ne’er-do-well man was arrested after confessing to being paid to kidnap and kill Viviana by her husband. But since no credible evidence was found, the husband was acquitted while the other man was sentenced. Everyone knows the husband more than likely did it, but there was also more than enough reasonable doubt. Reasonable doubt doesn’t care about the guy coming across guilty as hell, not in the Ben-Affleck-in-Gone-Girl way, but in a plain creepy way.

The series is based on an investigation by Rodrigo Fluxá, a widely acclaimed local journalist, who was the perfect person to cover the salaciousness of it all because of his thorough and empathic approach. Haeger’s family, of course, still insist that her husband did it, while the couple’s daughters have supported their father. The series could’ve easily become a piece of exploitative snuff. Instead, it deftly manages to temper True Crime’s worst impulses by making it, well, very Chilean.

Produced by Pablo Larraín’s Fábula (basically, the Chilean house for major productions), most episodes are directed by Claudia Huaquimilla, already one of the most promising Millennial talents before directing this, who also co-wrote all episodes. Co-directing is Gaspar Antillo, whose first feature also happens to be Chile’s first Netflix original, Nobody Knows I’m Here, starring Jorge García and which I should get down to watch soon. The pair brings an almost Tarkovskyian sensibility to the narrative. It’s not only about the pacing — which some find slow — but the series is just 6 episodes, each no longer than 54-50 minutes. It’s also not about the way the natural environment of Puerto Natales and the Lakes are (quite literally) framed. It’s in the way the characters are allowed to be humanized through natural interactions and a lot of staring longingly into spaces, natural or built-up. The salaciousness of the real story is eschewed for a dose of 100% pure Chilean melancholy.

Chile is cold, literally. Well, that’s a broad exaggeration: One third of the country is desertic, but so dry there’s no moisture to capture the heat at night. One third is Mediterranean, so plain-perfect weather, but so moderate every degree below average feels like a Polar front. The last third is wet, temperate to tundra woodlands and fjords. We like to believe that this is what makes us Chileans the more melancholy of all Latin American Peoples, that even though we’re still a warm and inviting bunch, there is a part of us that is more inward looking (we are also isolated for a Continent of inconceivable distances), that feels pain more intensely, but also more dosified way than the rest of our family. This is all, well, mostly true. It’s not like we are incapable of dancing and singing our way through pain, as most of Latin culture does, but we’re also are very Gothic about it.

In choosing to tell this story through this melancholy eye, the directors and writers are almost obliged to humanize every real person they are depicting (the names are changed, of course), including those that probably refused to participate. They put the focus were it matters: The tragedy of the relatives, in particular, her sister and mother, played by Chile’s Acting Stalwarts Claudia DiGirólamo and Gloria Münchmeyer, and her eldest daughter (Julia Lübert); and the tragedy of the failure of our law enforcement. Of course, the victim herself (here named Verónica, played by Aline Küppenheim) is allowed to be a living, complex person, and not just a corpse.

The story is told from the perspective of Víctor Pizarro (Pablo Macaya), a down-and-out lawyer for petty thieves and low-level drug dealers, who takes on the case representing Verónica’s relatives in order to resurrect his career. Though not portrayed as full-on, ambulance-chasing cynic, his involvement in the investigation is genuine, becoming so involved that it compromises his relationship with his son and his two friends and investigators, the reliable Nora (Amparo Noguera) and the insightful Braulio (Néstor Cantillana). One of the flaws of the series is that it devotes a little too much time to Víctor and his crew, and his emotional roller-coaster ride comes across too quickly. Still, Macaya does a great job embodying that particular type of middle-aged, divorced Chilean man, balancing the act of keeping himself afloat while trying not to fully stunt himself emotionally. Chilean actors’ more naturalistic approach help to make the series more poignant and more real, slurring words and speaking fastly as it is proper in our dialect of Spanish.

Another potential flaw, though this might be due to legal reasons, is that the private horror of Verónica’s/Viviana’s marriage is not fully developed. According to Fluxá’s research and as hinted in the series, there are strong reasons to believe that her husband was emotionally and economically controlling, that their marriage was loveless and she was taking steps towards a divorce and resuming her College studies. The series was faced with a dilemma in this regard. For one, anti-defamation laws in Chile are rather harsh; for another, it leaves us a void in trying to understand the motives behind the crime.

But if I were to contradict myself, I think the showrunners are being responsible not speculating about the mindset of the husband, just the facts at hand. The facts are the impossible way her body was found (in the middle of winter, in wet and rainy weather, inside a wooden house warmed with a large hearth, why did nobody smell anything?) and that the husband couldn’t have acted more suspiciously if he tried. Non-Chilean viewers might be puzzled by the way actor Daniel Alcaíno chose to portray the husband, but let me tell you right now, he knocks it out of the park. The guy is a freaking chameleon and has embodied the real character to perfection. You’d fall over backwards if, after watching the series, I showed you the other character that made him hugely popular.

42 Days of Darkness is also a story about class and privilege, about how Chile’s law enforcement and judiciary, which fails women on a regular basis, is not equipped at all to handle high crimes committed by people above a certain tax bracket. Correspondingly, this is shown in subtle ways: The difference between Víctor’s old business suits and that of the husband’s lawyer; the texture of the spaces of the well-off vs the public system, the houses and the cars and, most notably, in the way characters inhabit the stunning natural environment: Ones in picturesque, lakeside properties and moors, the rest in damp urban spaces, broken by overgrown weeds and bushes. The filmmakers and cinematographer Matías Illanes succeed in portraying the beauty of the environment without making it touristy, in balance with the dourness of urban, 2000s-architecture. I mean, you will still want to go and buy a place in that area, but like… don’t, the place is collapsed with people moving in from Santiago.

All episodes of 42 Days Of Darkness are available on Netflix. To be watched with a side of scrambled eggs, scones and a large, sugary cup of tea.


← If the Jury Messes Up the Depp v. Heard Verdict, There's No Hope for the Jury System | Jeremy Allen White's Forthcoming TV Series 'The Bear' Has a Great Vibe →