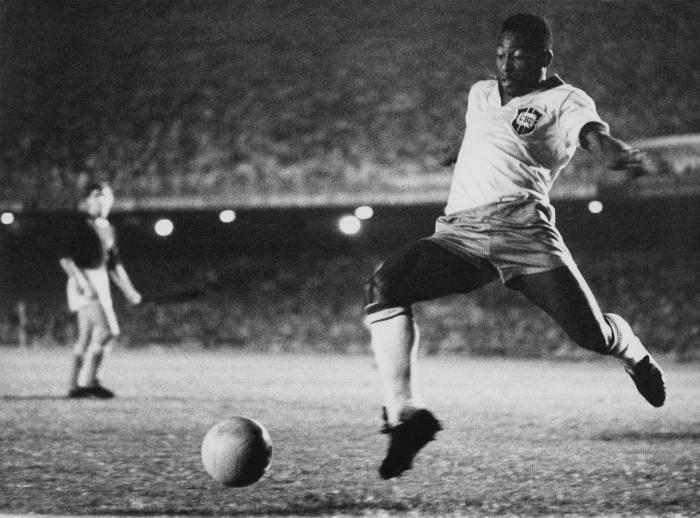 Most Brazilians and South Americans living today were born after Pelé retired from professional football, and yet he existed in our consciousness before we had biographical evidence. Do you remember when you were first told about Santa or whoever was the president when you were 1-5? Do you remember who you were and when you became aware of persons outside your immediate, formative adults? Well, in South America, those persons are Jesus-God, Santa, Pelé, and Maradona. The order might vary, but it’s always those four who are imprinted in our brains before they start codifying language. Even if your family is agnostic. About football or any other religion. And unless you’re Argentinian (we’ll get to that in a minute), Pelé is there as the myth of origin of football as something more than The Greatest. Because the GOAT conversation, in whichever field, is limited by the horizon of time and context. Pelé transcends that conversation because he is the foundational hero of the World’s Sport. There were football legends and GOATs before his time, but Pelé was witnessed. Football had already become the World’s Sport by the time he arrived, but he gave it its reason for being, he conferred it universality in a scope that had never been seen in the history of mankind. Football, Pelé built it.

Pelé built it as billions of people around the world became enraptured by a young, Black Man from Brazil. And being a Black Man in Brazil born in the 40s isn’t that different from being a young Black Man in any other empire, whether you live in its Colonies, the Metropolis or you live in an empire that in principle is a Republic, but in practice is an Empire. Like Brazil or the USA. And being a poor, young Black Man in an Empire sets you on a path where the margin of error will cost you your freedom, your life, or, best case scenario, a beatdown. But in the football field, the margin of error is something you dance with, around, over, below, under, and roughhouse in a measured way, whenever the linemen aren’t looking your way. Pelé built on that. Pelé conquered the world with a way of playing that showed everybody just how much you could with your legs and feet. Football isn’t the World’s Sport just because it can be played anywhere, with however many people and with anything that can bounce (in lieu of a ball, there’s always a can). Football is also the Global Sport because it’s the one where you manipulate an object with the appendages that did not evolve to do such things. We built our civilizations with hands, our key evolutionary feature are opposable thumbs. It is a very reasonable anthropological irony that the most popular sport is one where we need to use our legs. And other than dancers, Pelé built a whole new spectrum of things you could do with your legs.

I say we South American children know about Pelé — right after we know who our grandparents and maybe some aunties-uncles — because Pelé did something more than put us on the map. This forgotten Continent is split in two more or less equal parts in terms of size and population: The Spanish-speaking side is a haphazard array of Captaincies and Viceroyalties scrapping for cohesion, while the Portuguese-speaking side colonies turned the tables around and became the Metropolis of the Empire itself. Unified by the same religious and cultural matrix, barely separated by very similar languages, but separated by impossible geographical scales, each side developed on its own, balancing each other out even when they went to war. But we also shared the same mestizaje, the same slavery (though, ahem, we got rid of that generations before the US and Brazil), the same social and racial stratification, but also with the same nuances brought forth wherever race-mixing isn’t banned or it’s even encouraged. From that actual melting pot, roughly three-score and ten years after slavery was abolished in Brazil, a young Black Man, born in a small city of Minas Gerais, far from the state capital of Belo Horizonte, which is the same time, very far from the small city in Sao Paulo in which he grew up, that young Black Man became a proper Mythical Hero, with his own cycle and journey that exists slightly in our reality, slightly beyond it. And that proper hero was Brazilian, and that proper hero shared the same experience with that vast majority that are the poor and forgotten in a poor and forgotten Continent. Perhaps many other football or musical heroes would put Brazil on the map, before and during the times of Pelé. It is an Empire and cultural powerhouse. But Pelé did something more with his game, Pelé guaranteed that football and South America would be written in the same sentence. That in the repartition of soft power, that in the repartition of narratives, our forgotten Continent got the World’s Sport. Pelé won that for Brazil, but also for all of South America. And it is from him that we take for granted that there will always be South Americans at the top of the game at any time, in every country where football is played. That kids in Sweden, England, Italy, Cameroon, and Japan will idolize people from our forgotten continent and will, with their posters and jerseys, bring the name of their countries with them. That’s why it’s pointless to debate whether Pelé or Maradona or Messi are the Greatest Of All Time because regardless of who you support, that conversation is centered in South America. Maybe one day that conversation will move to Africa. But in being the first hero of the Third World, still, Pelé built that.

Pelé built more than just the game as we know it today. Pelé built it as something we need to see. From his debut and conquest in Sweden 1958 through a consecutive victory in Chile 1962 (where he was mostly sidelined by injuries), passing by the stolen forgettable England 1966, ending in his crowning achievement of Mexico 1970, Pelé became this kid the world needed to see, someone you could believe in because you had seen his miracles, even if it was just a blurry “greatest-moments” reel played years after the actual match. Pelé became the reason for the need to establish immediate communications, Pelé became the reason for the satellite and color TV. Color in cinema may have been developed and attuned for white people, but color in TV arrived to show us a Black Man in a bright yellow, green, and blue outfit. Not without reason, a common refrain when Elizabeth II died was the 20th Century itself had died. Actually, the 20th Century died a few months later, on December 29 of 2022, because Pelé was more 20th Century than everyone else. Pelé built the satellite, Pelé built TV, Pelé built football as the first Global Unifier. Pelé allowed the Third World to be heroic. Pelé built that

Because Pelé, beyond whether he was politically involved enough or not (in FIFA and in Brazilian politics), beyond his biography and shortcomings, beyond the man, for whom I cannot speak, Pelé was a character that the 20th Century sorely lacked.

Edson Arantes do Nascimento ‘Pelé’ was the prime hero of the 20th Century.