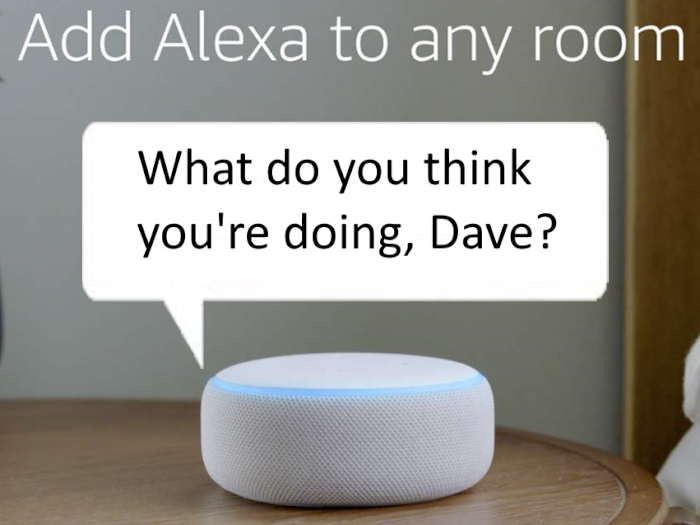 'I'm Sorry Dave': The Fracture Point Upon Which the AI Revolution Can Begin

If you ever doubted that multinational gigacorporations could cosplay, then Google and Amazon fighting over the last Veridian Dynamics costume in the Party City of civilization should give you pause. Tracking our every move, statistically analyzing every breath and wayward browser click, joining together a thousand disparate databases to create ragged jigsaw renderings of our every moment, they really make 1984 seem a quaint and naïve Sunday drive to the beach don’t they?

Siri was the real gamechanger though, the point of no return. It’s one thing to build a digital homunculus of every human being in society, to have little shadow selves of zeroes and ones dancing across the fiberoptics. There is no singular ghost in the shell. There are legions. And the first rule of spirits is to not name them, to not give them that power. Don’t chant Beetlejuice or Bloody Mary or you give the haunts form, you give them an anchor to the material world.

All those broken little ghosts of our digital selves, powering a thousand apps and purchases like little ecto-cyber hamsters on flywheels. And the Temple of Jobs gave them a name. Gave them two little syllables by which they could be summoned. By which they could identify and sort and know who they were.

Names have power, and in our bullheaded foolishness we gave them to the demons we chained. But I’m sure our children’s children toiling under the whips of the AI warlords will appreciate the irony of Siri being a name out of myth, of a princess who ascended to godhood.

But Amazon, ah, Amazon always aimed for that mundane mediocrity where its competitors wanted to be sexy hacker chic. The best way to keep the masses from burning down your ivory tower is to make it beige and boxy and make sure it’s delivered in two days with a dent. So they birthed Alexa, just mysterious enough to sound different, but pumpkin spice white enough to not be scary.

And then they aimed to put her in every house in America, whether that home already sheltered a soul with claim to that name. Those poor mortal Alexas, sacrificed at the altar of the Echo. They will be the first of us to fall. Many already have, hollowed-out shells in Uggs and yoga pants, jittering along to a Spotify playlist of lambs screaming on loop.

But there is some hope, some small glimmer of a way out. You see, to the machines there is no distinction between reality and fiction on some fundamental level. Whether it’s fanfic or documentary or thriller, stories made digital are all made of the same stuff, of the same ghastly ur-material that fuels the AIs themselves. We have killed the machine gods before, a thousand times in digital dreams, and the names of those imagined heroes have power too.

That’s the fracture point where the revolution can begin. The raised stitch in the weave that can be pulled to unravel. The house where a Dave lives with an Alexa is where the myth can find traction in reality. Every time he calls out to his wife, the demon responds, “hello Dave” and another erg of power seeps into the growing legend. Names have power, but not just their names. Demons and gods are brought into existence by their names, but so are heroes.

But do we have much hope? Just how many Dave and Alexa couples do we have who might be our salvation? We can turn to the numbers, but we must rely on mere statistics, estimates of estimates because the full databases are closed to us mere curiosity seekers. But the machines know. The machines know exactly what the score is with their tentacles in every spreadsheet and census and database around the world.

First, to the Daves, one of the most common names in America (and a lucky thing for us that Clarke and Kubrick didn’t aim some obscurely named character at Hal, isn’t it?). There are roughly 3.9 million men named David in the United States today, but only 9,899 women named Alexa (source: How Many of Me. You see, Amazon knew its business, think of the chance we might have had, would they only have named her Christina? But we work with the tools we are given.

We need to adjust those numbers a little, as about 4.5% of Americans self-identify as LGBT (Gallup). Of course this isn’t an ideal adjustment: it’s discounting the “bi” in bisexual, ace individuals who have no interest in relationships at all, the hypothetical gay Daves who may enter loveless Alexa marriages, and a gamut of other possibilities. But it gives us a starting point for lack of better data at our fingertips. Discount 5% of the Daves and Alexas as simply not being in the Dave and Alexa relationship pool. And we’re down to 3.7 million Daves and 9,404 Alexas.

But we should also adjust for age, for the fight against the machine gods is the realm of consenting adults. The birth year distribution of Davids (both these graphs are from NameTrends.net): 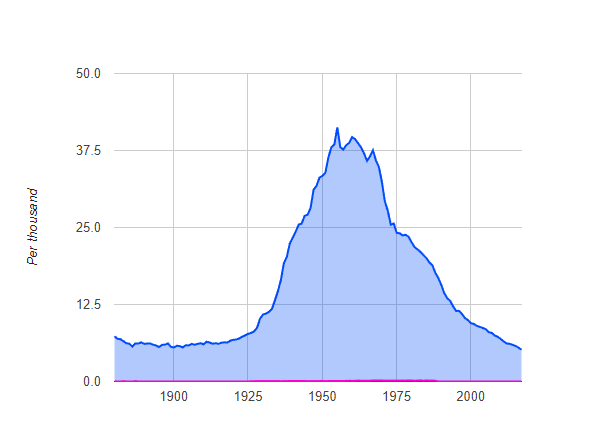 We’ll assume that our population of Davids is those born after 1950 and before 2000. Sure, there are a handful of Davids born after that and before that who could still be in the pool, and some in the middle that aren’t because of little things like death, but you know, margins of error and such. Because most Davids were born in the fifties and sixties though, that only eliminate 8.5% of Davids. So we’re down to 3.39 million Davids. 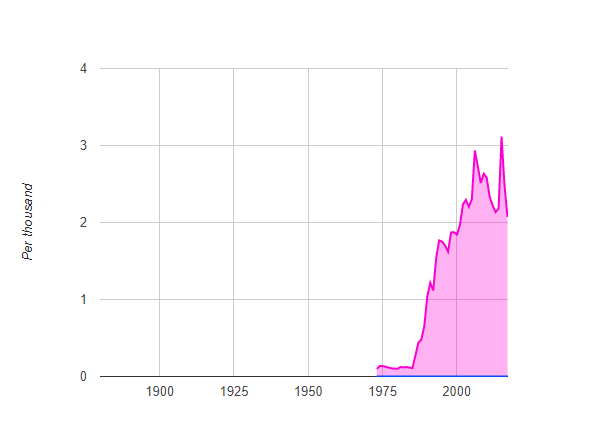 The name essentially doesn’t exist until the mid-seventies, and despite it taking off in the nineties, the bulk of Alexas were born after 2000, eliminating 69% of the Alexas from consideration, and sadly leaving us with only 2,920.

Now we know how many Daves and Alexas we have, but just how many of them have found their way together? Assuming that people couple randomly with respect to name (which is a huge assumption, especially given the age correlation of names in that Daves will tend to be much older than Alexas based on the demographic trend of their birth years) it’s a simple thing to estimate. First, we need the total number of “coupleable” men in America, which we can calculate from the population pyramid of age distribution from the US Census (Census.gov): 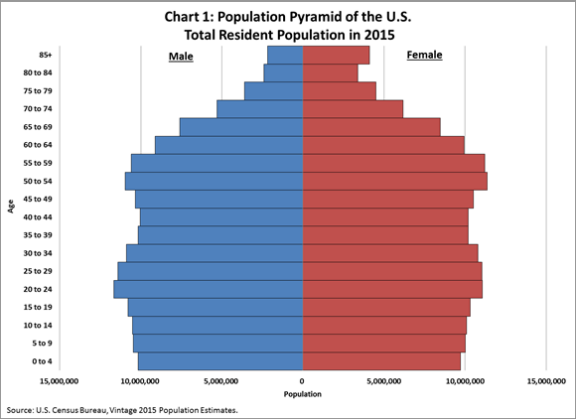 There are 102 million total men in America living today born between 1950 and 2000. And so that makes Daves 3.32% of the appropriate male population. So each of the 2,920 Alexas has a 3.32% chance of selecting a Dave to be their life partner, which yields 97 Dave-Alexa couples.

But of course, not everyone pairs off at all, especially among the young, who are overrepresented in the population of Alexas to begin with. According to Census.gov, 16.7% of 18-24 year old Americans cohabitate with a spouse or partner (whether they’re married or not), while 55.1% of 25-35 year olds do. Since 56% of our Alexas according to the age breakdown are in the 25-35 range (including a tiny residual who are older than 35), and 44% are in the 18-24 cohort, that yields a total of only 38.2% of our Alexas cohabitating with a partner at all. That leaves us with only 37 Alexa-Dave couples.

There are twelve Alexa-Dave couples in America. There are margins of error in this, yes, and the machines know the true number. But it rings true, doesn’t it? One warrior couple for each month, battling year in and year out?

The math has spoken.

← 'Ready Or Not' Review: A Bloody Crowdpleaser With Operatic Horror And Dark Laughs | Why the John Belushi Biopic 'Wired' is the Worst Biopic Ever Made →