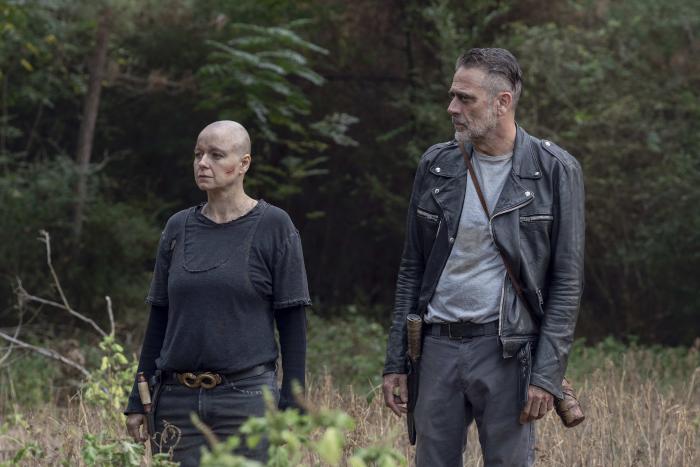 Who Died on 'The Walking Dead' Last Night?

Previously on The Walking Dead: Daryl, Carol, Aaron, and the rest of the Hilltop crew discover that Alpha and the Whisperers plan to ambush the camp and kill them all, hence they spend the majority of the episode preparing for the fight that is coming to their doorstep with catapults launching bombs made from flammable tree sap.

THE STORY SO FAR: The fighting continues, resulting in Earl taking Judith and the rest of the children away from the Hilltop and into hiding, Eugene losing his radio a.k.a. his one means of communication with Stephanie, Magna reuniting with Yumiko after pretending to be a Whisperer, and Negan capturing Lydia and informing Alpha, who has every intention of killing her because it is her destiny.

WHAT’S GOOD ABOUT THIS EPISODE?: The continuing fight between Daryl, Carol, and the Hilltop crew vs. The Whisperers. Yumiko slowly recognizing Magna ss she approached the gates with the rest of the Walkers. Negan being told by Beta to go herd some Walkers, and quickly getting tired of that before beating the shit out of them with Lucille 2.0. Yumiko confronting Carol about her lack of apologies to Magna and punching her in the face as a result. Judith confronting Earl after she realizes that he’s been bitten, and then being comforted by Daryl after being forced to put him down. Gamma/Mary finally being able to hold and comfort her nephew before her death at the hands of Beta, and him waiting patiently for her to become a Walker … until Alden took her down with an arrow to the knee head and sent Beta running. Negan telling Alpha about the loss of his wife and trying to convince her that killing her own daughter is not at all necessary, only to realize that she has no intention of changing her mind about it…which then results in her discovering that the abandoned shack where Lydia is being held is actually empty (because Lydia was being kept in another abandoned shack in the woods), followed by her throat being slit by Negan.

WHAT’S NOT SO GOOD ABOUT THIS EPISODE?: Yes, it sucks that Gamma/Mary is gone, but I would’ve also accepted her dying at Beta’s hands without him sneaking up on her in the woods like he’s Batman in order to do so.

IS NEGAN IN THIS EPISODE?: He certainly is, and much like he does in the comics, is the one who finally kills Alpha.

MICHONNE?: Nope. But judging from the previews for next week’s episode, we are finally going to discover what she’s been up to all this time.

CAROL?: Not only is she in this episode, but she’s the one who Negan meets up with so he can bring her Alpha’s severed head. Carol’s response? “Took you long enough.” This is clearly a sign that the two of them have been in cahoots with each other for quite some time — she is the one who sprang him from his jail cell.

IS DARYL STILL ALIVE? BECAUSE IF NOT, THEN WE’LL PROBABLY RIOT IF WE HAVE NOTHING BETTER TO DO: Still alive and putting his mace to very good use against the Walkers and Whisperers before doing what he can to comfort Judith after she kills Earl.

ARE THE WHISPERERS IN THIS EPISODE?: Well, yeah.

TO SUM IT ALL UP: A very impressive episode that helped bring an end to Samantha Morton’s time as Alpha, who was one of the very best things about the show these last couple of seasons. Kudos to Morton and Jeffrey Dean Morgan for their scenes together in this episode, and considering that there are four episodes left in this season, it’s safe to say that the Whisperer War is not even close to being over, especially after Beta finds out what happened to Alpha and kicks down a whole damn tree when he does.

This episode of The Walking Dead is brought to you by “Heads Gonna Roll” by Jenny Lewis:

Protect Ya Neck against the Coronavirus. We are making a few thousand prints and distributing them across New York City. Feel FREE to do the same in your City.
Share and RT this to the world. #wutang pic.twitter.com/coS5M3WdiW

← Is 'Westworld' Season 3 Turning Into 'Person Of Interest'? | Apps To Let You Watch Movies And Videos With Loved Ones During The Quarantine →