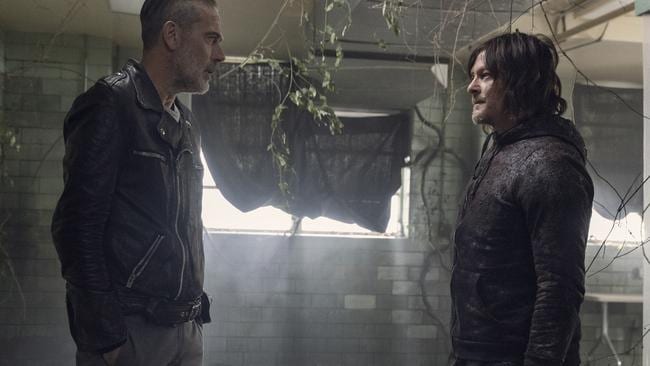 Previously on The Walking Dead:

Everyone has pulled up stakes and left Alexandria in order to take shelter in an abandoned hospital tower and plan their next move against Alpha, Beta, and the Whisperers, while Aaron and Alden followed them from a distance to make sure they would leave Alexandria and head to Oceanside instead. Ezekiel, Yumiko, and Eugene introduce themselves to Princess, who makes their lives just a little more difficult as they attempt to rendezvous with Stephanie and her people.

THE STORY SO FAR: The Whisperer War continues, while Beta and the Whisperers are still closing in on the hospital tower, and with Daryl, Carol and company doing what they can to leave the tower and get past them while also coming up with a plan to get rid of all of the Walkers and tilt the scales in their favor. Eugene, Ezekiel, Yumiko, and Princess are still on the road to meet up with Stephanie and her people.

Oh yeah, and Connie is alive and finally made her way above ground, only to pass out from exhaustion in front of Virgil, who will hopefully be a lot less insufferable when interacting with her as opposed to how he was when interacting with Michonne. Oh, and also members of the Commonwealth show up with assault rifles/bayonets in hand at the location where Eugene and company are supposed to meet Stephanie and take them all into custody.

WHAT’S NOT SO GOOD ABOUT THIS EPISODE?: If you still hate to see Negan getting a redemption arc, this episode is not for you. And I still don’t get the point of what Aaron and Alden were supposed to be doing during all of this, and why Virgil is even still around, but honestly…

IS NEGAN IN THIS EPISODE?: Yes, and instead of slipping out the back and making a run for it like he originally intended, he sticks around to help take down Beta. (Bonus points to Negan for the look of shock on his face as he immediately recognized Beta with his mask off)

CAROL?: Yes, and her trip to New Mexico with Daryl will have to wait (which I’m guessing is what their spinoff is going to be about), as they still have people who need them and important things to be done right here.

MAGGIE?: Due to the unfortunate cancellation of Whiskey Cavalier, Lauren Cohan as Maggie Rhee does show up in this episode in response to a note informing her of recent events. She and a masked colleague of hers with impressive fighting skills who I’ll refer to as Not-Black Noir show up in the nick of time to rescue Gabriel from getting killed as the Walkers and Whisperers make their way inside.

IS DARYL STILL ALIVE? BECAUSE IF NOT, THEN WE’LL PROBABLY RIOT IF WE HAVE NOTHING BETTER TO DO: Yes, he’s still alive and he has the pleasure of finishing off Beta with two knives in the eyes and leaving him to be devoured by Walkers as he hallucinates about seeing Alpha again and being embraced by the Walkers with arms wide open (sorry if reading those last four words made you hear the vocals of Scott Stapp).

ARE THE WHISPERERS IN THIS EPISODE?: Yes, since this is the end of the Whisperer War after all.

TO SUM IT ALL UP: A somewhat decent end to the season and to the Whisperer War, and as to the arrival of the Commonwealth and how much of a pain-in-the-ass this community is going to be for everyone, I’m going to take a wild guess and say that they’ll be just as much of a pain-in-the-ass as every other community that has made an appearance on The Walking Dead. Whether that’s actually true or not is no longer of any concern to me as this recap of the season finale will be my very last recap of The Walking Dead.

To Dustin, who gave me the opportunity to recap The Walking Dead for Pajiba, thank you. To those of you who enjoyed reading these recaps and being kept up to date with what was happening on the show through good episodes and bad, your kind words were and are appreciated. To those of you who hated me talking s—t about The Walking Dead when the episodes were bad, who wondered why Dustin or someone with more enthusiasm for the show couldn’t do the recaps instead, who actually wondered why I was writing recaps for a show that no one supposedly watched or cared about instead of writing more news stories about Black people and about other topics that affect Black people … well, you can all now breathe a sigh of relief.

And with that, my watch has ended.

Please stay safe, wash your hands, wear a mask, practice social distancing, and don’t you dare listen to anyone who tells you to not be afraid of COVID.

This episode of The Walking Dead has been brought to you by, what else, “Burning Down The House” by Talking Heads.