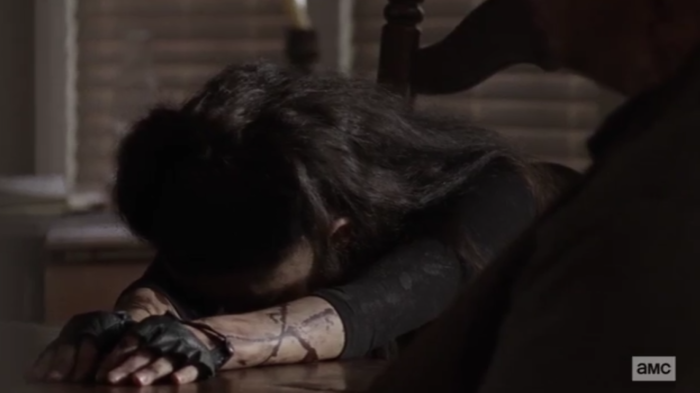 'The Walking Dead' Recap, 'Ghosts': It's Not Gonna Happen, Eugene

Previously on The Walking Dead: Flashbacks revealed how Alpha and Beta first met each other, while also cutting back to the present day to show how Alpha was determined to maintain her leadership of the Whisperers with Beta’s help.

THE STORY SO FAR: After nearly two days of fighting off seemingly neverending waves of Walkers approaching their dooorstep, Daryl, Michonne, and company are called to a meeting with Alpha to discuss their violation of her rule to not cross into her borders. Carol, who has become dependent on pills to help her stay awake, has become even more hellbent on killing Alpha by any means necessary. Negan and Aaron are forced to rely on each other as they are ambushed by a group of Walkers while they are out on patrol.

WHAT’S GOOD ABOUT THIS EPISODE?: Michonne making it clear to her people (particularly the former Highwaymen who are also hellbent on going after Alpha and the Whisperers to avenge their murdered friends) that they are all outnumbered and outgunned, and unless they have a plan to tip the scales in their favor, nothing is going to happen. The border confrontation between Daryl, Michonne, and company and Alpha and the Whisperers, and Alpha being such an asshole in order to get under Carol’s skin. Carol turning into Stellan Skarsgard or Al Pacino in Insomnia (depending on which film version you prefer) as she struggles to determine what’s real and what’s not (such as her being approached by Henry as she’s on patrol, for example) as she refuses to let herself sleep. Siddiq dealing with his own struggles as he still has post-traumatic stress disorder from when he was held captive by the Whisperers, but Dante lets him know that he has his back and that there is a way to recover from it, which he knows from personal experience.

WHAT’S NOT SO GOOD ABOUT THIS EPISODE?: Eugene getting a severe wake-up call from Rosita to stop playing the role of Dogged Nice Guy with her, because she’s not interested in him and because nothing is going to happen between the two of them. I have nothing against Rosita shutting down any illusions he has about getting out of “the Friend Zone,” (we could use more storylines such as this in a lot more entertainment so that more men and boys don’t become f*ckboys who think that the more persistent you are when dealing with women, the more likely it is that you’re going to get the girl and then get your d*ck sucked) but there was no real reason to go back to this storyline.

IS NEGAN IN THIS EPISODE?: Yes, and after he and Aaron early butt heads due to Aaron not trusting him at all, Negan is able to earn his trust by not splitting his head open with the crowbar he’s now armed with and instead coming to Aaron’s rescue when he’s temporarily blinded by Walkers covered in hogwood.

IS DARYL STILL ALIVE? BECAUSE IF NOT, THEN WE’LL PROBABLY RIOT IF WE HAVE NOTHING BETTER TO DO: Yes, he’s still alive and doing what he can to help Carol keep her bloodlust in check.

DO WE GET TO SEE CAROL TALKING TO ANY CHARACTERS PLAYED BY ZAZIE BEETZ? Heh, no she doesn’t.

ARE THE WHISPERERS IN THIS EPISODE?: They are, as Gamma shows up to inform Daryl and Michonne that Alpha wants them for a meeting and also that the Whisperers are not responsible for all of the Walkers that keep arriving at their camp.

TO SUM IT ALL UP: Another well-made episode that is building up to the eventual war with Daryl, Michonne, and company vs. Alpha, Beta, and The Whisperers. The episode beginning with a round-the-clock barrage of Walkers attacking was very reminiscent of the Battlestar Galactica episode “33”, which is an impressive touch that helps in making this season feel even more tense. My interest in anything regarding Eugene & Rosita is practically nonexistent, and I’m eager to see if the pacing and tension remains consistent throughout this first half of the season, in terms of how the Whisperer War will actually be set off.

This episode of The Walking Dead has been brought to you by “Just An Illusion” by Imagination.