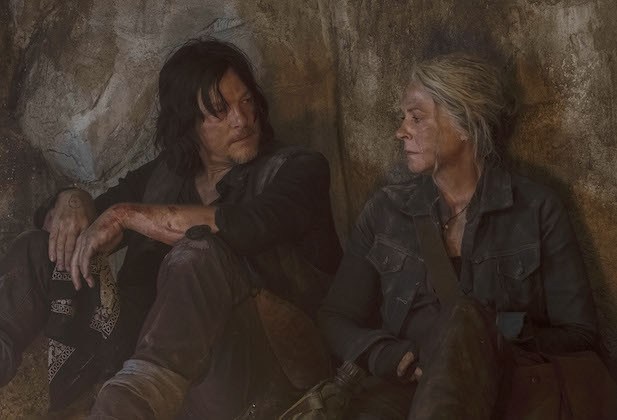 In The 'The Walking Dead' Midseason Premiere, Negan Discovers a Whole New Kink

Previously on The Walking Dead: After revealing his true face to Rosita, resulting in Rosita curb-stomping his ass like Caine did to Ilena’s cousin in Menace II Society, Dante is interrogated by Carol, Daryl, Gabriel, and Rosita on how and why he infiltrated their camp, as well as what he knows about Alpha and the Whisperers. Michonne, Judith, and Luke cross paths with a stranger named Virgil who claims he is trying to get back to his family on a naval base that is two days away and who may have supplies that can help take down Alpha for good. Gamma provides Aaron with information on where he and the rest of the gang can find Alpha’s horde, only for all of them to end up (thanks to Carol’s impatience and thirst for vengeance) trapped in an underground cave with Alpha’s massive horde of Walkers that puts all of their lives in jeopardy and would make even the late Admiral Ackbar shake his head in dismay.

THE STORY SO FAR: Daryl, Carol, Aaron, Connie, Kelly, Jerry, and Magna are still trapped in the cave with Alpha’s horde of Walkers and trying desperately to find a way out. Negan shares his suspicions with Alpha that Gamma might be spying on her on behalf of their enemies.

WHAT’S GOOD ABOUT THIS EPISODE?: Alpha looking down on Carol and smiling at her and her friends being trapped, and Carol screaming at her with rage in response. Daryl confronting Carol about her reckless behavior and her need for vengeance getting their friends hurt or killed, while Carol admits that she can’t shake the need to make Alpha suffer for what she did to Henry. Connie doing what she can to comfort Carol as her claustrophobia rears its head. Negan doing what he does best and running his mouth due to his dislike of uncomfortable silences and getting on Alpha’s nerves as a result. And Jerry fighting like hell to avoid being bitten by the Walkers while crawling through the cave.

WHAT’S NOT SO GOOD ABOUT THIS EPISODE?: Not nearly as much plot development or forward momentum as one would hope for in this midseason premiere. And yes, Negan and Alpha do hook up and have sex while Alpha keeps her mask on. And yet, the strongest reaction I had to this was…

IS NEGAN IN THIS EPISODE?: Yes, and he’s clearly just as surprised about the whole “having sex with Alpha, as a thank-you gift for pointing out Gamma’s possible deception” twist as we are.

CAROL?: Yes, and she’s dealing with her guilt for getting everyone trapped, her rage at Alpha, her claustrophobia while trapped, and her determination to hurt Alpha by using the found sticks of dynamite to kill the horde of Walkers and leave them trapped.

IS DARYL STILL ALIVE? BECAUSE IF NOT, THEN WE’LL PROBABLY RIOT IF WE HAVE NOTHING BETTER TO DO: Yes, and despite playing The Walking Dead version of American Ninja Warrior to get to the other side of the cave, he is still alive.

ARE THE WHISPERERS IN THIS EPISODE?: Yes, as they appear both in and out of the cave to do what Alpha ordered and make sure that they do not get out.

TO SUM IT ALL UP: A somewhat decent episode, but in all honesty, very little happened here that was worth waiting the usual couple of months for the show to return. If anything, this episode (with Connie and Magna left behind in the exploding cave and possibly dead, Carol feeling immense guilt as a result and begging Daryl to lash out at her, Negan and Alpha hooking up) probably would’ve been a better choice to be the midseason finale. And if you’d rather watch Jeffrey Dean Morgan take off his clothes and get his freak on in a way that won’t leave you moaning in confusion like Tina Belcher (and this has nothing to do with him or Samantha Morton, but more the characters themselves and the circumstances leading to them having sex), you can always watch him opposite Julianna Margulies in The Good Wife.

And you just know that Beta will find out about this and he will probably kick down an entire tree in anger when he does.

This episode of The Walking Dead is brought to you by “Coming Out Of The Dark” by Gloria Estefan: