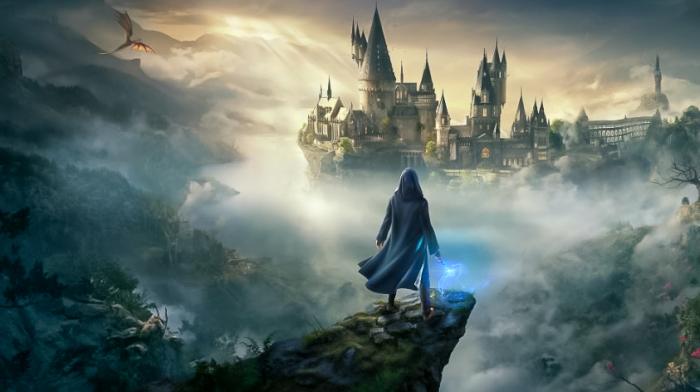 Another gift-giving season is upon us. Despite the financial burden and stress over finding the right gift for everyone in your life, it’s still a pleasure to see their faces light up when they unwrap a box to discover exactly what they were hoping for. For some gamers this year that means a preorder purchase of Hogwarts Legacy, the latest cash grab adaptation in the larger Harry Potter universe. Set in the titular school during the 1800s, Hogwarts Legacy promises fans the opportunity to study magic at their favorite institution.

For some gamers and/or their parents, friends, or partners, the fact that purchasing Hogwarts Legacy puts money in the pockets of author and noted transphobic weirdo J.K. Rowling is a concern. Assurances by Warner Bros. Games that Rowling had no direct involvement in the game’s development, or that players can customize their own transgender characters in the game, may not balance out knowing you’re in essence paying Rowling to spend more time on Twitter, whining about her increasing isolation and promoting fellow right-wing nutjobs. So I came up with a list of alternative purchases gamers and their loved ones might consider this holiday season.

Q: Hey James, Don’t Warner Bros. and J.K. Rowling have the right to continue milking their magical cash cow through a series of increasingly watered-down new properties, no matter Rowling’s personal beliefs?
A: They sure do, imaginary friend! I’d have preordered Hogwarts Legacy myself if it was 10 years ago or we were 1 timeline over where Rowling decided to spend her post-success years puttering around in a garden instead of Extremely Online.
Q: Are you sure you don’t just hate the fantasy genre or gaming in general?
A: My good sir, I’ve been a console gamer since the brand on the front was ATARI. I owned the original NES, a Sega Genesis, every iteration of the Playstation, and several handheld options. I rode the Oregon Trail and found Carmen Sandiego. And when it comes to fantasy, I began reading Piers Anthony’s Xanth series in the mid-1980s when I was 8, and I never looked back.

Q: Maybe you’re a snob who hates Harry Potter?
A: Nope. I was outside the intended age group when they were first released in 1997, but I still read them and was moderately entertained. And I like the movies too. The Prisoner of Azkaban is my favorite, because Alfonso Cuarón’s direction is amazing, especially after Chris Columbus’s efforts on the first two.

Q: So you’re a misogynist who hates female authors.
A: First, that’s a statement, not a question. Second, the list of amazing female genre authors who don’t get nearly enough respect includes but is not limited to: Susan Cooper, Theodora Goss, Martha Wells, V. E. Schwab, Rebecca Roanhorse, Seanan McGuire, etc. There are a lot of them. Please read more female authors.

Q: Can you guarantee these games were made exclusively by LGBTQ-friendly people and companies?
A: Definitely not. All I can say is no one influential involved in their production made blatantly hostile public statements targeting any group. It’s a low bar, to be sure, but they cleared it.

Q: So what is Hogwarts Legacy?
A: Hogwarts Legacy is a single-player, open-world action RPG set in the 1800s. Players create their character and play a Hogwarts 5th year who is new to the school. Players will explore school grounds and nearby Hogsmeade, join a House, attend classes, torture and kill classmates, etc. You know; a normal, wholesome high school experience, though sadly lacking both Quidditch and Wizard Chess. Preorders are available, with a PC, PS5, and Xbox X\S release scheduled for Feb. 10, 2023. PS4 and XBone versions launch on April 4. Nintendo Switch gets a version on July 25.

Q: What are some good alternatives?
A: I’m glad you asked! Below, you’ll find a few great games to pick from that are similar in theme or gameplay to Hogwarts Legacy. That means they’re mostly single-player, open-world games with a magical or supernatural element. Most are multiplatform and different versions are available in both hard and digital copies. I deliberately chose games that have been out for a while for several reasons. They’re all available now, rather than in February. They’ve already had the bugs worked out. And most are less expensive than Hogwarts Legacy, especially during the holiday season.


When it comes to high school simulators, nothing beats Persona 5 Royal. The Persona series is one of Japan’s best exports. Each iteration features a different cast of characters who attend school, forge relationships, get jobs, and battle demons based on global mythologies and psychological issues. P5 Royal, the most complete version of the latest game, is no exception. The player character, Joker, is a teenage boy falsely accused of a crime and moved to a new school. As he makes friends and explores Mementos, an alternate reality based on humanity’s shared unconsciousness, he’ll uncover sexual abuse, emotional manipulation, corrupt politicians, and much more. Combat is turn-based, with an elemental rock-paper-scissors component that adds complexity. Graphics and effects are top-notch, controls are smooth, and there are more than 150 hours of content to explore. There are a lot of friendships and romantic relationships to build, though they’re all heterosexual in nature.


If you’re looking for more variety in your romantic partners along with more frenetic combat, Dragon Age: Inquisition might capture your interest. As a player-designed protagonist gifted with strange magical powers, you’ll lead an army and eventually nations as you research the dimensional rifts tearing apart this medieval world. Fight dragons and racism while customizing your character’s abilities and gear, and recruit your own team of badasses to save the world. This open-world action RPG has 8 years of content and a plethora of playstyles and relationships from which to choose. This is your best opportunity to seduce a hirsute Dwarf archer outside of creating a very specific dating profile. If this is your kind of game you will easily sink hundreds of hours into this title. Plus there’s a great new Netflix animated series set in the same world, and relevant to the storyline!


Looking for a more cinematic story? Insomniac Games has you covered with Marvel’s Spider-Man and Spider-Man: Miles Morales. These two, available on Sony consoles and PC, are unique stories set in yet another corner of the Marvel multiverse. The first follows Peter Parker as he swings through New York City and tries to cure a mysterious plague that’s befallen the city. He faces Doctor Octopus, Kingpin, Mr. Negative, and a host of other villains as he gradually unlocks new suits and abilities. Miles Morales is a direct sequel and puts players in the unlaced sneakers of NYC’s newest hero as he tries to follow in his idol’s footsteps. The corrupt Roxxon corporation has developed a dangerous new energy source, and it’s up to Miles to both expose Roxxon’s secrets and protect the city from a high-tech criminal army known as the Underground who want to use the power for their own ends. The gameplay is smoother than a veal cutlet and though you could use the subway to get around, swinging through the skyscrapers is sheer bliss. There are gay characters and lots of Pride flags waving about in the city, the voice cast is extremely talented, and apart from a few brief but mandatory missions as Mary Jane Watson in the original, the action never slows down. The story is as good or better than most MCU movies and shows. There might be something wrong with you if you aren’t in tears by the end of Spider-Man. Gorgeous, fun, and with a solid 20-60 hours of gameplay each, they’re a good investment and the best superhero-themed games since the Arkham series.


Maybe you like your magic powers less spandex, more X-Files. Control Ultimate Edition has what you want. You play Jesse, a young woman searching for her brother. You have a strange set of powers, gifted to you by unusual items, as you wander a seemingly deserted Federal Bureau of Control. Its agents were taken over by the Hive, a mindless buzzing from another dimension that seeks a foothold in ours. Control’s original game was fun but frustrating, with glitchy controls and seemingly impossible battles. The Ultimate Edition lets you tweak gameplay to your satisfaction, and does away with pesky bugs like game freezes and poor framerates. While nothing particularly groundbreaking in terms of gameplay or story, how it’s presented is unique and fun. Elements of The X-Files, The Laundry Files, and cosmic horror abound. Control Ultimate Edition is available on every platform.


If your alt-fic tastes include far-flung futures, consider trading in that broomstick for a robot horse and travel the Colorado wilderness in Horizon: Zero Dawn and its recently released sequel, Horizon: Forbidden West. Clocking in with a minimum of 40 hours apiece, players take on the role of Aloy, a young woman who controls the destiny of our very species. We wrecked the world through nanotechnology; A.I. saved the world through the same. Now parts of that A.I. have gone rogue and seek to wipe biological life from the planet. Add in robot dinosaurs, ancient city ruins, and (in the sequel) space travelers, and you’ve got an open world worth exploring.


Finally, no list of recent open-world action RPGs would be complete with Kratos’s adventures in 2018’s God of War and its recent sequel, Ragnarok. Both games topped numerous year-end lists and rightfully so; Kratos, Atreus, Freya, and Mímir take us on a journey across the frozen North steeped in Norse mythology and father\son dynamics. Ragnarok is one of the most breathtaking games I’ve ever experienced. The voice acting is superb. The story is touching, occasionally devastating, and features gods far less benevolent than anything Marvel offers. I don’t know if I’ve ever hated a game character more than I loathed Baldur and Heimdall, and I watched Sephiroth gut Aerith back in the day. One of the most beautiful moments is the ballad of Jari and Somr and their eternal campfire. The tale of 2 men who found in each other something to balance the cold world without. Please read the entire thread. It’s worth it.

And there you have it! 9 high-quality action games with RPG elements set in a variety of open worlds full of magic, combat, relationships, and engrossing stories. They’re all available now, many for half the price of Hogwarts Legacy. And, as far as I know, they can all be purchased without funding the online meltdown of any once-beloved authors. Talk about a Christmas miracle. And this is only a fraction of the amazing games out across the genre spectrum right now. There’s also Elden Ring, Cult of the Lamb, Marvel’s Midnight Suns, Xenoblade Chronicles 3, Tiny Tina’s Wonderlands, and the list goes on. Whatever their style, there’s something out there for the gamer in your life.