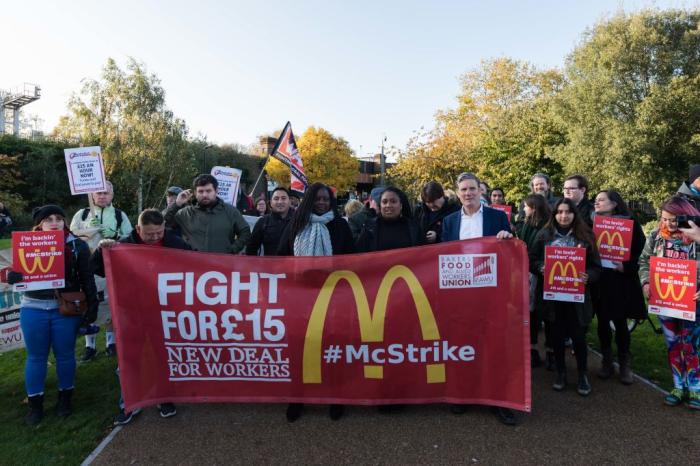 Wage Disputes Shouldn't Be a Goddamn Race to the Bottom, Stop Doing the Ruling Class' Job For Them

McDonald’s workers in the UK are currently striking for better wages and more secure contracts, and society is predictably cleaved in twain; on one side are those who support the rights of employees to be paid fairly and to not live in perpetual fear of not getting enough hours, and on the other are those brave souls unafraid to speak out, who see those entreaties as shocking affronts to the human spirit and who with great foresight point to the slippery slope of societal decay that fair wages are surely a sign of.

London-based McDonald’s worker Lewis Baker describes the strike in a piece in The Guardian thus:

It’s time for McDonald’s to give its workers a new deal. I’ve worked at McDonald’s for six years, and today I’m on strike for the fourth time. McDonald’s workers everywhere face poverty pay, insecure hours and a lack of basic respect.

We made history when we first went on strike in 2017. We won the biggest pay rise McDonald’s workers have had in 10 years, and showed that when we come together and fight, we are strong. In the branch I work at in south London, conditions improved for a while. A manager who had been abusive and made the workplace a hostile environment lost their job. Other managers had to think twice about how they treated us when they knew there was a union presence.

Although things initially improved, they have slipped back, and we’re still paid poverty wages. This is why the McStrike is back, and this time we’re demanding £15 an hour, guaranteed hours, and for McDonald’s to recognise the Bakers, Food and Allied Workers’ Union.

London is one of the most expensive cities in world to live in, yet McDonald’s pays barely more than the minimum wage. I get £8.80 an hour, and by the time I’ve paid rent and bills, I don’t have enough to live on. I had to work full time while I was studying at university just to be able to support myself. London rent is astronomical, yet our wages stay the same.

All this is amidst the McDonald’s chief executive Steve Easterbrook being fired for workplace impropriety, and being handed a severance payment of £505,000—as well as the option to keep stock awards worth £29 million—as a result. His successor will earn £97,000 a year, as well as being entitled to a target bonus of £165,500.

The strikers have marched on Downing Street to delivery their message, and support has already come from several sectors, with Labour Shadow Chancellor John McDonnell and Labour Shadow Brexit Secretary Keir Starmer meeting the striking workers on the picket line and marching with them.

Antagonism has also come from the usual places. It’s taken on a familiar form too. Like, this disingenuous dungheap disguised as a good faith argument:

Jeremy Corbyn: McDonalds workers must earn £15 an hour!!!! It is the priority!!!

That right there is a genuine Tory and Brexit Party voter so we can dismiss the pretense of care out of hand and toss it straight in the bin, but unfortunately there are ordinary members of the public who do think like this, and you see the same depressing bootlicking bulls**t float out from the U-bend of public discourse every single time there is a wage dispute in the news.

‘Bus drivers striking for £10 an hour? F**k em! I only earn £8 and I manage to survive by eating out of the bins outside the Pret a Manger!’ ‘Deliveroo drivers asking for more secure contracts?! To hell with those greedy sods, I sleep on the street outside my boss’ house just to make sure I can come running when he whistles for me to go put the toilet seat up for him and I’m fine, I turned out toilet seat!’

A full time worker at McDonalds would therefore earn approx. £31,000 a year. Thirty one thousand pounds to flip burgers.

One saves lives. The other cooks beef. Fool. https://t.co/ZhSFSVsGyt

The solution to that tricky conundrum isn’t to pay McDonald’s workers less, you houseplant. It’s to pay nurses more! And stop devaluing McDonald’s workers as just ‘someone who cooks beef’. I fu**ing hate McDonald’s as an exploitative company and cruel capitalist entity, but the people who work there do a hard, thankless job and they deserve fair compensation for that. In fact this goes across the board. Name a job. Any normal job that isn’t banker or estate agent. It’s likely that they should probably be getting paid more.

It’s not a race to the bottom, you mugs! In a time of yawning cataclysmic inequality, where a few gilded individuals glide through life in bubbles of wealth that would make Mansa Musa take notice while the rest of us are doomed to not just inherit a planet choked and burned by the ravages of their capitalism, but to fight between each other for what little scraps they deem toss our way, we should’t be directing any ire at all down, at those asking for a sliver of dignity and equality, but up, at those people and systems who took things like ‘dignity’ and ‘equality’ from everyone else and melted them down to cast into a golden toilet, the lid of which we are expected to come running and lift whenever they whistle.

← This is the Most Evil Cat I Have Ever Seen. And That's Saying Something | 'The Golden Girls' Was Originally A Joke And More Facts About The Iconic Show →