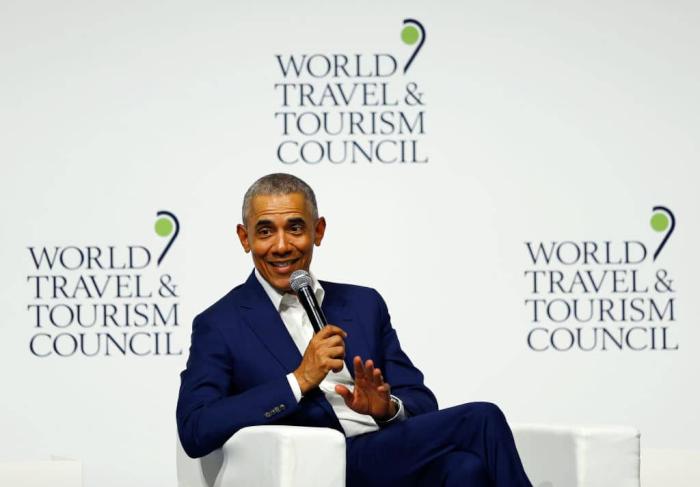 Shock of all shocks, the racist current occupant of the White House is actually being described as a racist by the media. I know, I never thought this day would truly come. There are actual CNN headlines calling him a racist! None of this “racially tinged” nonsense like he’s a thread of saffron in a jar of coconut milk. So while racist Trump tries to find new women of color to threaten and politicians are being forced to call a spade a spade, Twitter decided to have a bit of fun and rub it in Trump’s nose for a while.

Trending today was the hashtag #ObamaWasBetterAt, and basically, it’s everything.

#ObamaWasBetterAt being a man with dignity and class… A million times better. pic.twitter.com/4d8afTs2NX

#ObamaWasBetterAt choosing a classy life partner that was an exceptional representation of First Ladies pic.twitter.com/dfk7rhoIEx

#ObamaWasBetterAt not getting punked by Kim Jong Un with giant letters that make a man look small. pic.twitter.com/16t0g1nSOR

#ObamaWasBetterAt showing respect to others. Sharing the stage with others instead of pushing them aside. pic.twitter.com/qgGlUZcLWN

And yes, we know that Obama’s Presidency was not perfect and that he was responsible for a lot of foreign and domestic policy decisions that were, to put it mildly, not great. It’s not a great idea to deify any politician for obvious reasons, but in this case, the groundswell of Twitter responses was a keen reminder of a few things. One, that Obama got a whole lot of crap during his Presidency from Republican critics for the tiniest reasons that Trump never faced, and two, that there is a stark difference between him and Trump in terms of basic human decency. Say what you want about the PR tactics of Obama’s eight years and all those adorable family pictures, but damn, I miss seeing a President who had genuine human interactions with others. Remember when the President actually talked to kids and told jokes and seemed to know what he was doing? And also wasn’t a racist?

← How Does George Conway Feel About Being Married to a Racist? | Netflix Removes Controversial Suicide Scene from '13 Reasons Why' →