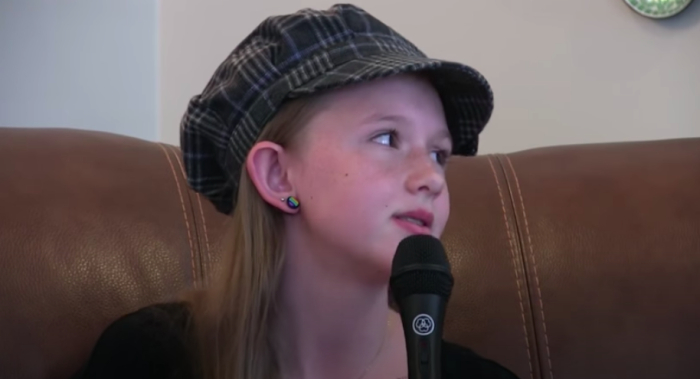 At 13, Savannah decided it was time to come out to her Mormon community in Eagle Mountain, Utah. She had come out to her family nearly the year before. On May 7, 2017, this brave girl decided to share her truth with her fellow congregants, taking to the pulpit during the Sunday service in a time reserved for sharing feelings with your community. In response, the church leaders cut off her microphone.

In her speech, Savannah declared, “No part of me is a mistake … They did not mess up when they gave me freckles or when they made me to be gay. ” “God loves me just this way.” She also said, “I do not choose to be this way and this is not a fad … I cannot make someone else gay … I believe that God wants us to treat each other with kindness, even if people are different, especially if they are different.”

The Mormon faith does not accept homosexuality, which Savannah knew as she approached the pulpit. Her mic was cut by church officials after she declared she was not a “horrible sinner” and, said, “I hope to get married and have a family. I know these dreams and wishes are good and right. I know I can have all of these things as a lesbian and be happy. I believe that if God is there, he knows I am perfect just the way I am and would never ask me to live my life alone or with someone I’m not attracted to. He would want me to be happy. I want to be happy. I want to love myself and not feel shame for being me.”

Savannah continued, “I ask you—” and her mic went dead. She was then told to leave the pulpit by the men leading the service.

Savannah’s mother, Heather Kester, is not Mormon, but she attended the service to support her daughter. After she was silenced, Savannah returned to her seat and cried, as her mother held her and assured her God loved her. “I was devastated for her,” Kester told the press, “I was angry at how that was handled.”

The video, which was taken by one of Savannah’s friends, has been circulating online for weeks and scored mother and daughter a spot on the Mormon Stories Podcast, where they answered questions about the incident.

Kester has asked that Savannah’s full name be withheld for the girl’s privacy. However, she has said that her daughter is passionate about fighting for LGBTQIA rights, and so was hoping to educate and change minds within the Church of Jesus Christ of Latter-day Saints.

Lay bishop Judd Law was not there for Savannah’s testimony but seemed to defend the church officials who silencer her, saying, “We do not do politics in our chapels, and exploiting this recording for political purposes is inconsistent with the nature of our worship services.”

However, the Church of Latter-Day Saints is no stranger to politics. In 2008, the Mormons lead the push for passing California’s Prop 8, which banned same-sex marriages within the state. The homophobic proposition was later struck down as unconstitutional. Since then, Mormon preaching on homosexuality has softened some. According to the church leaders’ website, being gay is no longer considered a sin, but gay sex is. As such, there’s a major obstacle for gay people within the church to be accepted if they choose to be in same-sex relationships. This is precisely what Savannah was speaking against, the doctrine that urges gay Mormons into either celibacy or marriages in which they can never truly be themselves.

While this story isn’t “news,” it is receiving renewed attention because of the following video of Savannah’s speech, which shook the Mormon officials.

‘No part of me is a mistake’ — This brave 12-year-old who came out to her church was cut off and asked to sit down pic.twitter.com/42O71OL2zu

← Trump Is a 'Danger to the National Security' Of the U.S., Say Trump Advisors | The Decision of Social Media Networks to Crack Down on Trump Now Is Not a Coincidence →