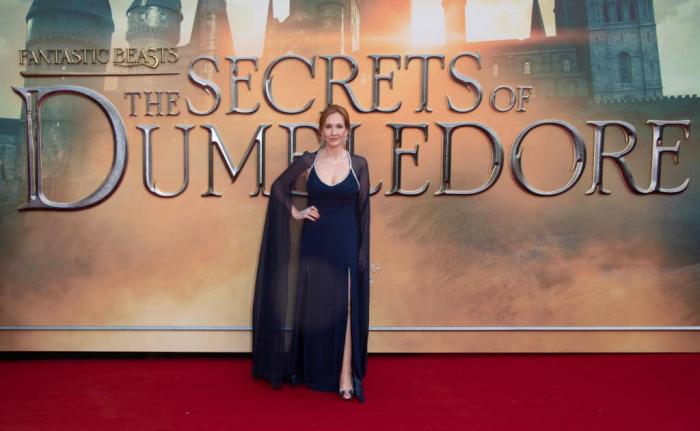 J.K. Rowling, Anti-Intellectualism, and How the Press Uses Pop Culture to Attack the Marginalized

As a full-time pop culture hot takes merchant, I’ve had to limit how much time I dedicate to writing about J.K. Rowling. It’s not as though I would ever be short of material. It has been undeniably fascinating, like the ultimate train-wreck, to watch a figure as beloved as she choose to flush away decades of goodwill in favor of callous hate. Her transphobia is impossible to ignore, a sign of her decline into radicalization against a painfully marginalized community who already face ceaseless attacks from all sides of the political spectrum. In the U.K., transphobia has become the bread and butter of the major media outlets. The right-wing rags decry the mere existence of trans people as proof of some sort of brainwashed evil while the left-wingers pretend their garden-variety bigotry is a form of open-mindedness as they reduce people’s lives to debate points for cheap think-piece fodder. This system is smothering and increasingly hard to escape on my side of the pond. Transphobia is the default mode, so it seems, wielded like a hammer by anyone who wants money, attention, or a fresh army of goons.

Rowling’s festering hate has turned to rot in every corner of cultural criticism in Britain. We got a brilliant example of that this past week. The Reading Agency and BBC put together a reading campaign as part of the upcoming celebrations for Queen Elizabeth’s 70th anniversary on the throne. The Big Jubilee Read is a list of 70 titles published across the commonwealth that ‘define our social and cultural heritage.’ It’s a pretty varied list, far more interesting than such things often are. The books encapsulate 70 years of literature across the Commonwealth, from VS Naipul and Margaret Atwood to Douglas Adams and Yangsze Choo. A panel of librarians, booksellers and literature experts, as well as fan recommendations from around the world, were chosen.

Harry Potter is not on here, and of course the British press has decided to latch onto this utterly meaningless omission as ‘proof’ that poor ickle Joanne is being discriminated against because she’s just so determined to scream over trans people with lies and fury. One of the panelists explained to BBC Radio 4 that the Potter books weren’t on the list because they’re children’s fiction and ‘in terms of the space over that decade, which was the 90s when more and more books were coming out across the Commonwealth, it was decided to make space for a book that was good and equally well received.’ Seems fair enough, right? Why not draw attention to books that many people may not have read rather than perennial best-sellers? The Lord of the Rings isn’t on the list. Neither is His Dark Materials. Hell, Doris Lessing isn’t on here and she’s one of the most important authors of the 20th century.

None of this is shocking or designed to make some grand political point. Harry Potter isn’t on here because it doesn’t need the boost. But nope, the press have decided to make a mountain out of a molehill. The Telegraph dedicated a lot of space to ranting against the ‘BBC preaching’ of the list, claiming that Rowling’s omission was ‘disgraceful’ and ‘cowardly.’ All the think-piece writers are insisting that Rowling is one of the best authors of the country and to not include her in an arbitrary list is misogynistic. I won’t share all of it here because oh dear lord who has the time, but the objective of this noise is pretty clear to me. It has nothing to do with Rowling’s actual merits as a writer or whatever one thinks of her books. Harry Potter has had an undeniably major impact on culture as a whole. It shaped me in a big way and it will probably continue to do so for generations of people. We could argue for days about whether or not she’s a genius writer or whatever (I think it’s important to differentiate between being a good storyteller and being a good writer, however.) But none of that matters here. What matters is how bad-faith readings of art and ideas help to fuel harassment, abuse, and censorship, all under the guise of a so-called culture war.

It’s all pathetically simple, really: latch onto a total non-story, blow it up to ridiculous proportions by insisting that the ‘real’ issue is one of massive ethical importance, then use that noise to further silence and oppress those who are already denied the use of their voice. We saw this with GamerGate and the Sad Puppies of the Hugo Awards. We lived through it with the attacks against the Ghostbusters reboot. Right now, libraries in America face greater pressure than ever to remove books from their shelves that dare to acknowledge queer lives, racism, and the Holocaust. The prevalence of anti-trans bills and the ‘Don’t Say Gay’ law have weaponised age-old slurs and accusations of child abuse to roll back decades’ worth of progress. If you’ve seen how these tactics have unfolded then you know exactly why Rowling is being propped up in this way, and why she’s happy to allow it.

Rowling herself frequently uses her own work as a means to share her political views, to the point where it quickly became childish, such as when she insisted that Harry Potter would agree with her on her stance regarding boycotts of Israel. Well, yeah, he would agree with you because he’s a made-up character who does whatever you tell him to. She understood keenly how pop culture is an easy-to-understand conduit for such discourse, although it also hammered home how politically curious and questionable the Potter series really is.

It’s extremely easy to do this with pop culture because it’s something we all communicate with and tend to have strong feelings about (in large part because the corporate commodification of entertainment encourages it.) While our wider conversations have grown more varied and layered when it comes to how we engage with the art we love, we’re still prone to the most simplified of readings. Such binaries are encouraged by the clickbait economy: Your Fave is Problematic; Cancel Culture is At It Again; Look at how the Left are Ruining Our Art, and so on. None of it has to be true because the mere implication of something deviating from the assumed norm (cishet, white, male, centrist) is enough to inspire ire when framed properly. The feminists are trying to make sci-fi liberal, says the person dedicated to a genre defined by politics. The woke kids are too triggered to hear different opinions, bellow the side who have the thinnest skin in the game.

Consider the British tabloid that tried to create drama over reports that ‘woke’ students sympathised with Frankenstein’s monster, as if that weren’t the entire f**king point of the book. Recently, another right-wing paper claimed that Jane Austen was being erased from one university’s literature curriculum to ‘decolonize’ its options. What really happened was that, as many courses do, the books were simply changed around for new options. But oh no, now there’s a Black writer on the timetable. These are less dog-whistles than they are foghorns, and all of it defined by proud anti-intellectualism. It is of course ironic that the side who have so thoroughly appropriated concepts of freedom of speech seem so eager to shut it all down in the name of pwning the libs. What is depressingly just as unsurprising is how these tactics are now the tools of the people who claim to politically oppose this brand of censorship.

Not that any of them seem to know what censorship actually is. Not including a book in a list is not censorship. Not wanting to buy something written by a bigot is not censorship. Calling out a beloved series’ endless bullsh*t is not censorship. I feel like all of this should be obvious but when you’re confronted with such staggering mis-readings of basic concepts at every turn, it can be hard to forget the simplest of details.

I don’t expect this crows to truly engage with art or theory in any discernible way. Just look at how critical race theory, an academic framework, has been turned into the ultimate white supremacist boogeyman lately. Still, my heart can’t help but sink every time I see the most powerful media figureheads slopping up their own gruel, fully aware of how their faulty framing and overblown rhetoric could hurt a lot of people. Rowling is all too happy to allow this to happen, remaining silent when she’s used as a tool by everyone (aside from Vladimir f**king Putin of all people.) Her cause requires no moral core to be furthered because it’s a display of pure amorality, one that she’ll silently allow to be furthered by the same people she would otherwise oppose. It’s a one-way street for her with a conclusion that she won’t be impacted by, even if plenty of others are. We can call it out when we see it but it’s tough to come up against the seemingly insurmountable power of the media, a multi-millionaire, and their well-funded political caches.

The great thing about art is how it challenges you, how it encourages you to place your empathy and ideas into new contexts and see the world through a fresh pair of eyes. That was one of the things that drew so many people to Harry Potter in the first place. Imagine a world where good triumphed over evil and our sense of wonder was never quashed. I would say that Rowling has lessons to learn from her own books but perhaps she’d benefit from reading another book for a change. The same goes for her media sycophants, but doing that would force them to admit that they actually care about pop culture beyond its politically convenient misuses.

← Jerry West Is Livid About His Depiction in 'Winning Time,' Which Tracks with the Way He's Depicted in 'Winning Time' | Review: 'Fantastic Beasts: The Secrets of Dumbledore' Struggles To Justify Its Existence →