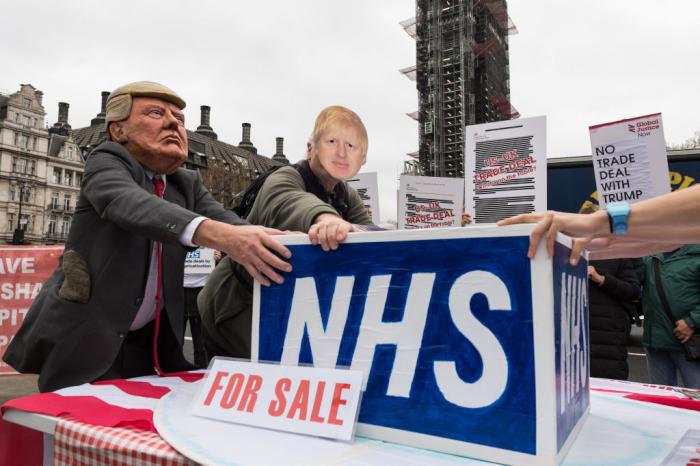 The UK General Election is 10 days away. It’s the country’s most important election in living memory. The choice could not be starker.

As Brits head into polling stations on 12th December, the future of the nation stands at a crossroads. One path leads towards Boris Johnson and his far-right aligned Conservatives, bringing with them further decimation of the social fabric, more deadly austerity and rampant poverty, homelessness, and food banks, more imperial aggression abroad, and more class war against the most vulnerable in society. The other path is represented by Jeremy Corbyn’s Labour, and it leads towards the most radical reorganisation of power relations in generations, with a massive rejuvenation of all sectors of civil society, an immediate end to austerity, and an end to wars of imperial aggression.

The Labour Party manifesto is a radical and ambitious document in some ways—chiefly on things like climate change, foreign policy, race, and education; and in other ways it is a very moderate guide on how to achieve parity with similar yet less rabidly Thatcherite nations in mainland Europe that, in being painted as crazy and unworkable by the country’s right-wing media, shows just how far the UK has been pulled into a neoliberal dystopia in which any suggestion of improving society a little bit for anyone but the very wealthiest is seen as completely impossible. If you don’t have time to read the manifesto, this short video summary is a good cross-section of Labour’s plans to transform British society:

The eyes of the world are on the UK. A Labour victory wouldn’t just be a huge boon for an international left, signaling that an alternative is possible, but also for the global climate movement as well, as Labour’s plans are not just ambitious—they are completely necessary to stave off the worst of the coming calamity, and they would be lighting the way for other similar countries to follow. Equally significant for ordinary Brits are the differences between the Tory and Labour plans for the National Health Service. The NHS would simply not survive under another five years of Tory rule. Already stretched to breaking point by a decade of vicious Tory cuts designed to make it easier to sell off, the death by a thousand privatisation cuts of the country’s universal healthcare provider would be turbocharged under a Johnson administration. To any Brits reading this: For a glimpse of the future of what the country’s healthcare will eventually look like if we wake up to a Tory administration on the 13th December, look no further than Bernie Sanders’ question on Twitter about absurd medical bills.

$20,000 after my baby Anthony died at Tarzana Medical Center which was 15 minutes farther than the hospital where he was born where we were insured (Kaiser). He choked on his formula and was unconscious then died.

13,000 for getting told I have kidney stones

My daughter, Shalynne's, $350k medical bill to die a needless death. Treating her and saving her life would have only cost $1,500. All because she couldn't provide proof of insurance.

I can't pick just one, but the total is pretty absurd. pic.twitter.com/MyDM7KWhUd

Not nearly as horrible as most of the posts here, but it drains my account and often overdraft it because I need things like gas in my car, groceries, and paying bills
It’s a viscous cycle

$120,000 emergency room bill came the day I paid $8000 for my daughter's funeral.
She died because she couldn't afford medicine and treatment after she was released. That is what access to healthcare gets you.

$15,000 for my sons birth. We had full coverage that covered birth. He was frank breached, upside down, & Drs told us if don’t do C-section theres a chance he could die. That we need to do C-section so we did. Everything went great

But insurance declined to cover it..

Few years ago in the ER with my daughter suffering a severe asthma attack. Rep from billing came in and made us pay $300 BEFORE they would send in a doctor to give her a breathing treatment.

$12,000 for less than 1 hour in the ER. Lower back strain. The doc touched my back for all of 3 seconds, wrote me a prescription for lidocaine patches and steroids and said, "have nice day" 👋

My father passed away after an accident kept him in ICU for 7 weeks. Four different staff physicians tried to double bill for an "outpatient" visit each time they walked into his room, to the tune of $60k in extra charges over that span. I kept getting those invoices for a year.