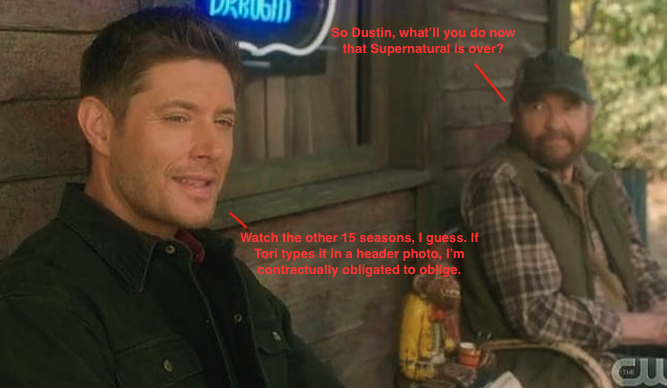 This Week On Podjiba: Doctor Who Day, 'The Mandalorian', And The End Of The Road For 'Supernatural'

Hey y’all, Dan “Hammer” Hamamura here, and boy do I have an episode of Podjiba to share with you! This week has it all: Injokes referencing conversations you weren’t privy to, random Pat Morita facts, Dustin lying, conversations about the same shows we always discuss, Dustin lying, and Tori demanding the floor for an uninterrupted “ToriTalk” which is definitely not a thing I’ll ever allow her to do again. Hmmm… now that I type all that out, it doesn’t sound very different from any other week, I suppose. Except that this week I’M THE VERY SPECIAL BIRTHDAY BOY, and also I’m currently being played by Tori, who is really managing to capture that certain Hammer je ne sais quoi, don’t you think?

- In honor of Doctor Who day, Tori lectures us on the single uninteresting behind-the-scenes business decision that almost singlehandedly led to the long-running sci-fi series becoming a mainstream hit in the modern era (starts at 16:00 if you wanna skip, but don’t tell her I told you that)

- What does Baby Yoda smell like, why can’t Dustin stay awake, and other pressing thoughts about this week’s episode of The Mandalorian (30:23)

- It’s the end of the road over on Supernatural, but was it a happy ending? Tori already wrote her review of the finale, but that’s never stopped us (or me… uh, her) from talking about it anyway! (42:40)

- I have it on good authority that Dustin doesn’t read the weekly Podjiba articles before posting them, because I’m definitely not writing this for the first time or anything (I’m diddly dang Dan “The Man” Hamamura, after all), so I just want to take a minute and say BABY YODA IS VERY DISAPPOINTED IN YOU, DUSTIN: 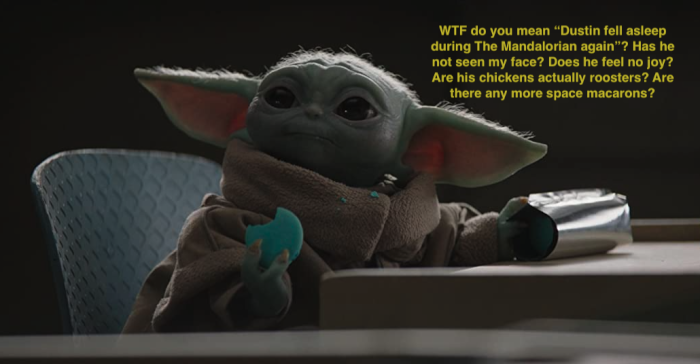 Podjiba can be located on all the major purveyors of quality podcast goods, as well as embedded below or downloadable from this link right here. Let us know what you think!

← Reddit Asks the Question: 'What Other Food Argument Is As Heated As Pineapple Vs. Pizza?' | Mike Schur, Creator of Ron Swanson, Goes To War Against Thanksgiving →

Image sources (in order of posting): The CW, Disney