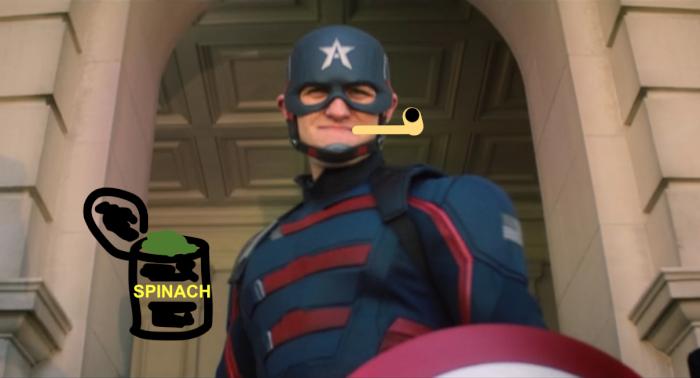 This Week On Podjiba: 'The Falcon And The Winter Soldier' And 'Staged', A Totally Normal TV Pairing!

The header image is the inevitable result of the sort of genius that happens when all three of your hosts put their heads together and decide that this is totally us putting our best foot forward this week.

It is that special brand of wit and keen observational skill we bring you, this and every week! On today’s episode, that skill is laser-focused toward:

- The BBC comedy Staged (available on Hulu in the US) - which, after watching on Tori’s recommendation, may have taken over my tv for the past few days!

- We also talk about (of course) the premiere of The Falcon And The Winter Soldier on Disney+, which I assume all of you have already seen. You’ll never guess which of the three of us enjoyed it the most (or you might, even if you were just blindly guessing with no other information, it’s still a 1 in 3 shot)!

(spoilers for both shows, obviously)

Also, in other nonsense, we pitch our brilliant ideas for what celebrity liquor/wine brands would be like, and came up with that sweet header image. Hope everyone has a good week!

Separately… I received an email today telling me that Podjiba is on a new platform! However… I did not submit the podcast to said platform. Are they an aggregator? Did they find the RSS feed? Or is the podcast itself spreading?

It’s probably nothing to worry about. Besides, it’s not like you can’t already find Podjiba on most platforms, including right here for you direct download types!

← Morning Briefing: The Gun-Violence Cycle, George Segal, and Cinnamon Toast Crunch | Reddit Asks the Question: 'Parents, What Are Your 'I Looked Away For ONE Second' Stories?' →