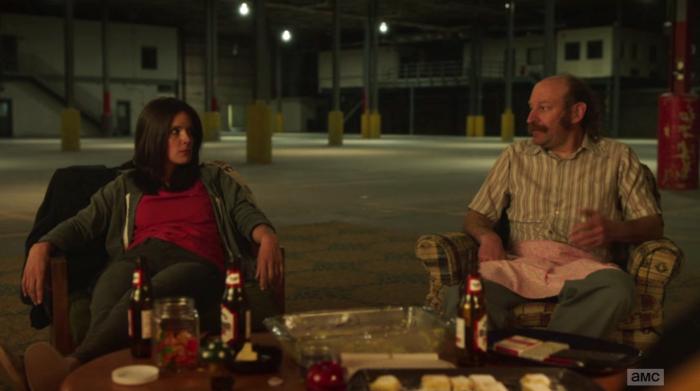 'Snowpiercer' and 'Run' and a David Ury-Themed Game on Podjiba!

You know who David Ury is, right? I’m sure you do, as I’m sure all of you loved Lodge 49 just as much as I did. No doubt you recognized him pictured above (alongside Sonya Cassidy) and decided that some David Ury-related content was just what you needed.

Dustin was recently alerted to the fact that David Ury has been spending at least part of his quarantine making videos of himself performing famous TV theme songs. But these interpretations are very… dramatic.

He’s got a number of them on his youtube channel, but here’s one that definitely approved by Tori:

Having discovered these videos, Dustin correctly decided that this would make for an excellent game, which means maybe, for once #Dustincheats was not a thing (but only because he was running the game, although that DOES mean he had all the answers, and thus, certainly, was in a position to be able to cheat, even if he did not actually do so this time).

Oh, we also talked about our feelings on the season finale of Run, as well as the first two episodes of Snowpiercer, thus fulfilling our contractual obligation to discuss current television.

(Side note: As it turns out, both shows largely take place on trains, which means once again, we accidentally backed into a themed week!)

As always, Podjiba can be found just about anywhere podcasts are available, including (soon) Pandora! Did you know Pandora had podcasts? Apparently they do! It can also always be streamed within this post below, or downloaded directly right here.

← As Expected, Trump Went Ballistic After Twitter Fact Checked Him | Good News In Entertainment: 'What We Do In The Shadows,' Lisbeth Salander, Mel C, And Gary Busey →