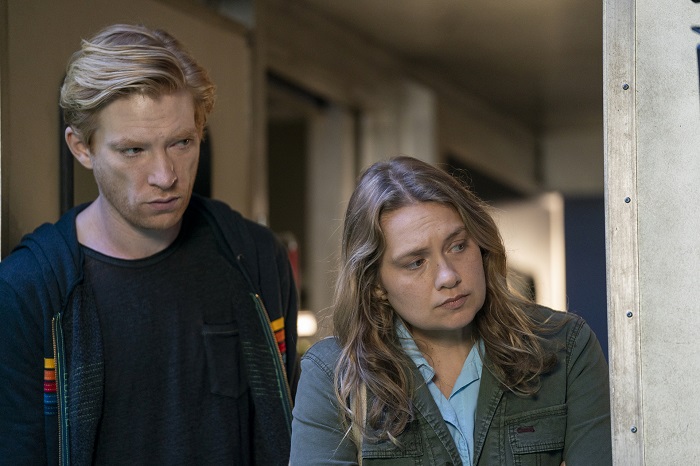 SPOILERS FOLLOW FOR THE HBO SHOW RUN AND ITS FINALE

What is it with shows starring Merritt Wever being falsely advertised? (Except for you, Unbelievable, you were perfect.) When the trailer premiered for HBO’s Run, the premise seemed fun, sexy, and relatively low-impact. Wever and Domhnall Gleeson playing ex-lovers who decide to ditch their responsibilities and fulfill a decades-long pact, hopping on a train and flirting and probably doing naked stuff. That seemed enjoyable! And once the coronavirus pandemic started to escalate, Run seemed particularly well-timed. We’re all (if you’re doing this right, unlike some people) cooped inside. A show about two attractive people traveling the country? How cathartic! How romantic! 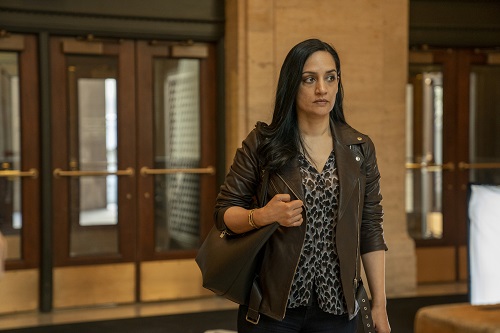 Now that we have seven episodes of Run behind us, though, it is very clear that this show is not that show. I alluded to this in my initial review of the first five episodes, but man, did Run take a turn when Archie Panjabi showed up. Panjabi is an amazing actress, but Fiona was not an amazing character. I do not mean here that Fiona, being played by a WOC, should have been a good person. Characters who are POC should have interiority, can be evil or duplicitous or superficial or whatever else; people are like that, and no POC should be a flatly positive token. So Fiona being a bad guy isn’t automatically a problem within Run, except for the fact that the show also did that thing where they cast people of color in supporting roles and then either toss them aside (Saamer Usmani as the flirty Derek) or use them for “humor” by making them ineffective at their jobs (Tamara Podemski as Detective Babe Cloud, who sleeps with a murder suspect, and Shaun J. Brown as Detective Ryan Everwood, more interested in going home to watch a TV show than investigating a suspicious death). Optics-wise, that’s not great! But more irritating, and the most problematic, is how badly written these characters were, and how their only purpose in the story was to complicate a narrative that should have been pretty straightforward. Fiona as a villain, unimpressive. Doing this whole double-cross thing with Billy (Gleeson)? Dumb. Trying to blackmail Ruby (Wever)? Dumb. Cut your losses and move on from this terrible dude! Concocting this overly elaborate plan to steal his cash is not very well thought-out for a character who we also are being told was the sole architect of Billy’s success! And that leads us to Fiona’s death, which—extremely jarring and tonally discordant!

Once that went down in “Jump,” it became pretty clear creator Vicky Jones was losing the thread, and episodes six and seven, “Tell” and “Trick,” furthered that. Fiona, Billy’s business partner and ex-lover and Ruby’s short-term friend, dies a gruesome death impaled on farming equipment. It’s pretty fucking gross. And yet … Billy and Ruby barely react. Their ultimate concern isn’t that a woman is dead, but whether they’re going to fuck again. Yes, Billy and Ruby are selfish characters—but they’re superficially so. There’s no deeper level here. Billy decides to turn himself in because he thinks his career is already shot. Ruby doesn’t want to because she doesn’t want to lose her kids, although her abandoning them for a week-long tryst on a train with an ex-boyfriend is already fairly awful. It feels like Run was aspiring to be a show like Big Little Lies or even like Mad Men, in which various character deaths haunt the main cast and are juxtaposed with their own myopic concerns. This is most obvious in Ruby’s complaints about her life in “Tell”: 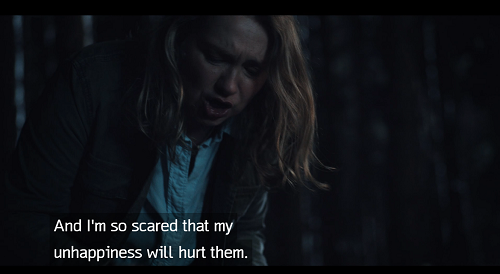 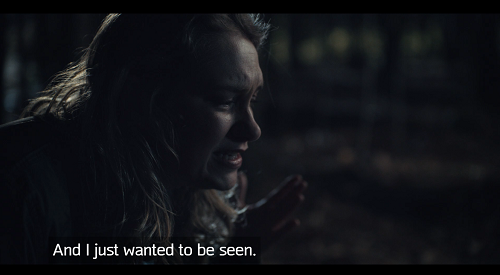 But then … the characters just briefly discuss an abortion Ruby had, and then when they get back on the train, they seduce each other by cooing about being fugitives? Someone DIED. None of this WORKS. It also is not particularly funny! It takes a big leap to go from “woman cheating on her husband” and “self-absorbed guy clinging to modicum of fame” to killers, and yet Run asks us to buy that transformation in the span of, what, maybe a day in the show’s universe? By its end, Run very much felt like a show where its characters were only as smart or as dumb as they needed to be for any given situation. And that extended to Detective Cloud and Phoebe Waller-Bridge’s taxidermist Laurel, too. Why spend so much show time on this random ancillary romance? I can appreciate the lesbian representation, but the development of that subplot just seemed to suggest that there wasn’t much more to do with Billy and Ruby, and they are the main characters. That is a problem.

Perhaps I would be more sympathetic if Run didn’t end so frustratingly, simultaneously setting up a second season (STORIES CAN JUST END, GODDAMMIT) and yet essentially returning Billy and Ruby to more or less where they started. Ruby goes home to her monotonous family life. Billy has been implicated in Fiona’s death, but it’s unclear how much guilt—and hence self-growth—he really feels about any of this. (Also mishandled throughout the show was how famous Billy really is; Ruby mocks him early on, but the show doesn’t make clear whether his onstage outburst was really so scandalous as to wreck his entire career. Not to be cynical, but come on, guys, when was the last time a handsome white man really suffered any consequences?) And so the comedy part of this black comedy … yeah, that evaporated a while ago.

While watching the final episodes of Run, I was reminded of two other shows: Godless, which also starred Wever, and Dead to Me, the second season of which dropped on Netflix on May 8. Godless is the other show I was referring to in my opening—another series starring Wever that was advertised as one thing and turned out to be something entirely different. Nearly every piece of promo material that came out about Godless was about its focus on these badass women running this town on their own; the prevalent marketing image was of Wever and Michelle Dockery standing next to each other, holding rifles. Then I watched the show and nearly the entire damn thing is Jeff Daniels yelling in an increasingly bad Texan accent, and most of the narrative thrust is about his character and Jack O’Connell’s. The women of Godless are utterly ancillary to Godless! The only time they do badass shit is the finale, which then feels completely anticlimactic because otherwise these women have had practically no character development! Wever’s character, much like Ruby in Run, does one exceptionally stupid thing in the finale that allows for another person’s death, and that ending is completely unsatisfying! I regret the hours I spent watching Godless, and I remain irritated by how disingenuous that marketing campaign was. 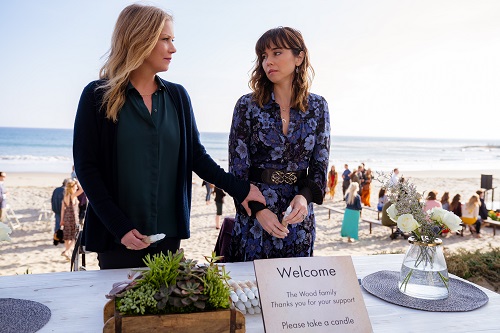 In contrast, though, is Dead to Me, which follows the broad outline of a soap opera with its melodramatic plot twists and its entangled relationships, but also provides its characters with more emotional depth than nearly any other on TV. The catharsis I feel when watching Dead to Me is sometimes profound, and I cried a lot, and that is high praise! Judy (Linda Cardellini) and Jen (Christina Applegate) have done awful things, but they feel the weight of those awful things. They’re haunted by their actions. They obsess over what they could have done differently. They think, constantly, about how one mistake and one lie lead to another, lead to another, lead to another. The show is so nuanced in its depiction of domestic abuse, female unfulfillment, and the nearly toxic intimacy of codependent friendships that I utterly buy every choice, no matter how absurd, these characters make. Their bond feels lived-in and genuine. Contrast that with Run, in which Ruby and Billy could, arguably, have been involved in a woman’s death, are certainly involved in the cover-up of her death, and seem to feel … nothing. Ruby floats the idea that maybe Billy pushed Fiona, but is back in his arms nearly immediately afterward. The only thing that makes Ruby reconsider running away with Billy is the reveal that he might have used her for a new book idea, not the fact that a woman is dead. And at a certain point, I couldn’t really understand what Ruby or Billy saw in each other, either. If they were just fueled by desire to return to who they were before their lives went so awry, did we need a death in this narrative at all? Couldn’t they have just, I don’t know, talked it out? Talking is great! Talking can be sexy and fun too! WHAT HAPPENED TO JUST TALKING?

Will there be a second season of Run? I’m not sure, although we all know that HBO has a tendency to label shows limited events or miniseries and then switch up those descriptions to “seasons” if the show takes off, leaving the door open for a continuation (remember what happened to The Outsider, and before that, Big Little Lies?). But if there is, I doubt that Run can right itself, and that’s a bummer for us all! What a waste of a great concept and solid sexual chemistry from Wever and Gleeson. All you had to do was not kill off the brown lady. Alas.

Run aired on HBO from April 12 through May 24. Godless and Dead to Me are available on Netflix.