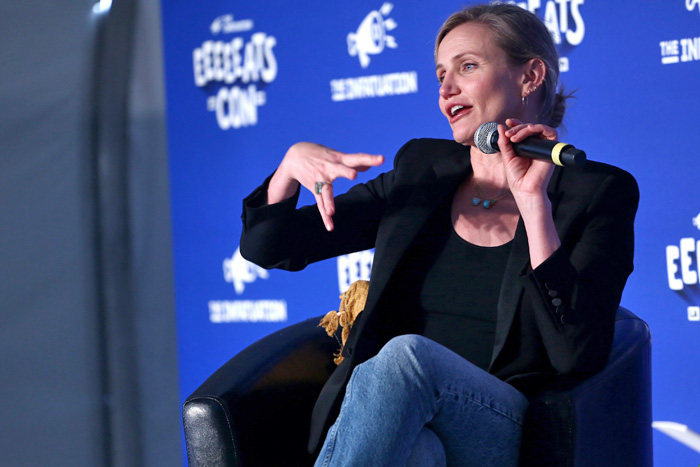 Chrissy Teigen and Quibi sure sound like they’re turning the cake meme into a show. (Lainey Gossip)

I’m trying to be respectful about this whole Kanye thing, but I’m not going to not laugh at Kim Kardashian crying because he took her to a Wendy’s. I’m sorry. I’m awful. (Dlisted)

Cameron Diaz is selling a new kind of “clean, organic” wine that gives you fewer headaches. Awesome, but it still gets you drunk, right? We’re in a pandemic, people. Let’s not go crazy. (Celebitchy)

Police reform must include reparations for those living through the trauma of police violence. (The Root)

I’m going to die in 7 days from reading this sentence. https://t.co/fTXorbTVkM

AMC Theaters and Universal just struck a deal on how long films need to run in theaters before they go to digital, and I did not expect the number to be that low. (CNBC)

Meghan Thee Stallion reminds all the assholes that getting shot isn’t a joke. (The Muse)

From Kristy: Before you join the Challenge Accepted empowerment trend on Instagram, you might want to know its origins, which have been lost amid glamorous selfies. (NYT)

No matter who’s nominated for the Emmy, only one man so fully transformed himself as to become unrecognizable. pic.twitter.com/j2qyzataXQ

Netflix’s Daredevil actor Peter Shinkoda says Jeph Loeb made it a mandate not to develop Asian characters because nobody cares about them. Not good! (io9)

Surprise! The “Umbrella Man,” who caused chaos in Minneapolis during the George Floyd protests, is allegedly a full-fledged white supremacist who belongs to both the Hell’s Angels and whatever the Aryan Cowboys are. (The Daily Beast)

My old The Superficial writing partner, and one true love, Carmen Ribecca has a few words on not using Facebook silently when you see right-wing friends and relatives spouting awful Trumpist crap. (Medium)

Ale did a deep dive into the relationship between Mary Todd Lincoln and Elizabeth Keckley with two books: Elizabeth Keckley’s autobiography, Behind the Scenes: Thirty Years a Slave & Four Years in the White House and Jennifer Fleischner’s Mrs. Lincoln & Mrs. Keckley. "In the end, Elizabeth and Mary may not have been ‘friendship goals,’ but at least Elizabeth’s story was written and saved. She’d have been another silenced voice of history if not for her relationship with the psycho Mrs. President, and for that alone, I’m grateful." (Cannonball Read 12)

This is Baloo. He is very serious. Not sure why you’re laughing. His seriousness is not a laughing matter. 14/10 pic.twitter.com/9PJItT9KEO

← 5 Shows After Dark: 'Stockton on My Mind' on HBO, 'How to Rob a Bank' Premiere on Vice | Stolen Mama Bear Recovered, Ryan Reynolds Celebrates →