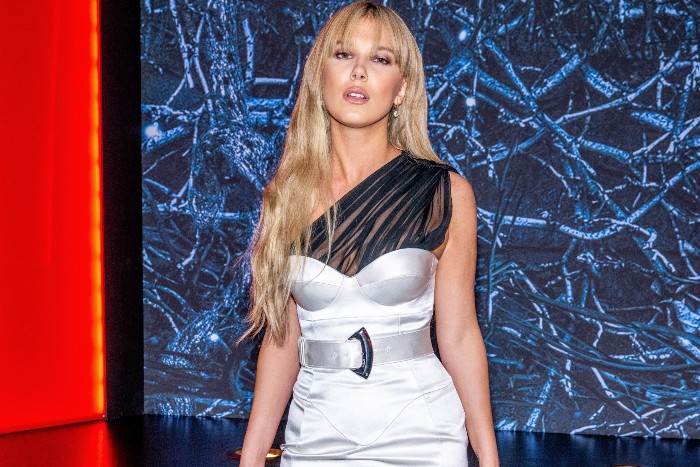 Wait, This Is Millie Bobby Brown?!

So some background: A little over a month ago, I finally let my son watch Stranger Things and binged all three seasons with him. I haven’t revisited any of them since they premiered, and my feelings are probably in line with everyone else’s. The first season is still surprisingly tight and well-crafted, and it’s a goddamn shame they kept making more. (The first half of Season 2 was better than I remembered, and then it all started sh*tting the bed with a quickness.) Anyway, my son loved all of it, so I’ve been shooting him links about Season 4 like this Variety article on the new big bad, Vecna. Included in the link is a pic from the premiere. I spent a good five minutes trying to spot where the heck Millie Bobby Brown is and just figured she had other filming commitments. It happens! Even more so with COVID sending productions scrambling. I also assumed the blonde next to Winona Ryder was a new mom on the show or something. Nope, it’s Eleven. And that’s why Millie is trending on Twitter right now, which I’m shamelessly glomming onto for a buttload of clicks. This has been another exciting installment of How Mike Makes the Internet Sausage.

So sad to hear about Fred Ward. When it came to battling underground worms I couldn’t have asked for a better partner. I will always remember chatting about his love of Django Reinhardt and jazz guitar during our long hot days in the high desert. Rest In Peace Fred. pic.twitter.com/WLOB0iVwkd

John Fetterman, who’s running to be the Democratic nominee for an open senate seat in PA and is the front runner in the polls, revealed after a noticeable absence from the campaign trail that he suffered a stroke. However, he claims he’s going to make a “full recovery” and will continue running. I’m just going to wish him well on his recovery and severely bite my tongue for the moment. (CNN)

A very nerd-tacular thread from Ryan Broderick on why it makes sense that Vision was nowhere to be found in Doctor Strange and the Multiverse of Madness. (Twitter)

While their shares tumble and investors pull out, Netflix thinks now’s a good time to tell employees that if they’re offended by some of the streamer’s content, they should quit. It’s a bold strategy, Cotton. Let’s see if it pays off for them. (Mediaite)

#JohnnyDepp has a history of racism and cultural appropriation. So why is he so desperate to be a Native American? https://t.co/TYcvwgLYIr

Melania Trump is mad she hasn’t been on the cover of Vogue. (Daily Beast)

I’m pretty sure I mentioned this when Meghan McCain went through the same thing, but my wife had a miscarriage before we had our first kid. It’s a gut-wrenching experience that I sincerely wouldn’t wish on anyone. My deepest condolences to Britney Spears and Sam Asghari. (Vulture)

Would you break up with someone over cheese? In Cathy Yardley’s Gouda Friends, Tam dumps her boyfriend after he threw out her fancy cheese (and cheated on her). Llamareadsbooks loved the cheese puns and the friends-to-lovers romance. (Cannonball Read 14)

This is Princess Leia. She was surrendered by a breeder after being born with no front legs. We rescued her and can sponsor her lifelong care because so many of you bought our @15outof10 dog treat. You can help shelter pups like her by clicking below ❤️‍🩹https://t.co/sBLftyaFoS pic.twitter.com/TuEdauwCQ9

← 5 Shows After Dark: 'The Time Traveler's Wife' Premiere on HBO, 'Conversations With Friends' Premiere on Hulu | Box Office Report: 'Multiverse of Madness' Stays on Top as 'Firestarter' Burns Out →