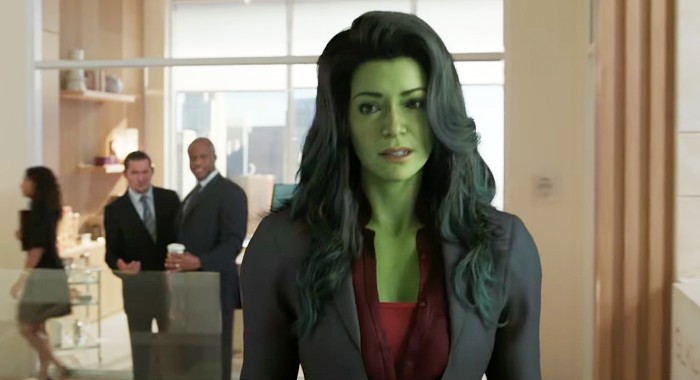 The CGI in the ‘She-Hulk’ Trailer Is, Wow, Not Great

You guys know me. I’m not some fart-sniffing Film Twitter elite who feels the need to flaunt my cinéma bonafides by constantly sh*tting on the Marvel movies/show. I genuinely like them despite their seemingly increasing number of flaws. Case in point, the new She-Hulk trailer. Everything about this show looks like a good time, particularly casting Tatiana Maslany, and I was a big fan of the Charles Soule run the series is loosely adapting. But, holy hell, what is going on with the CGI? If you thought the green screen Egyptian underworld in Moon Knight was the height of Marvel pushing out a rush job, hold on to your butts.

Simu Liu displayed his impressive hosting skills at the Junos and reveals to GQ he will be dancing in the new live-action Barbie movie. (Lainey Gossip)

In case it wasn’t clear, Elon Musk is thoroughly trying to weasel out of buying Twitter by suddenly making a big stink about bots. (Celebitchy)

Excellent thread on Joe Rogan beclowning himself by ranting about another fake article he fell for because confirmation bias is a helluva drug:

OK. So I've got a minute. Why Does Joe Rogan think Australia is trying to make growing your own food illegal? Let’s investigate. https://t.co/zA5NH1qZtq

From Dustin: A helpful piece for how to go to a dispensary if you grew up during the war on drugs. (New Yorker)

From Genevieve: I married someone I worked with and our messages to each other on work channels were not this openly flirty. (Ask A Manager)

From Claude: Activision-Blizzard decided that the best way to combat the negative PR they were getting — up to and including recent anti-union efforts — was to announce their “Diversity Space Tool”. It then got worse. (The Mary Sue)

From Dustin again: I’m officially obsessed with the Savannah Bananas baseball team, where a crowd member can record an out by catching a fly ball and games only last 2 hours. (YouTube)

When I started doing Pajiba Love, one of the things I vowed was to never link Jacobin. That has yet to be a bad decision.

The Buffalo shooter’s parents were civil engineers for the state of New York.

Yet white leftists have decided to once again make this about “economic anxiety” pic.twitter.com/mj2XGcjLHQ

Meghan McCain used to routinely talk about how much she loves Tucker Carlson on The View, so I definitely wouldn’t describe her tweet about his Dan Crenshaw remarks as ripping Tucker. She very, very, very lightly chastised him before returning to her regularly scheduled MY FATHER-ing. (Mediaite)

Has Lucasfilm learned anything? (io9)

Because Taylor Sheridan clearly has photographs of half of Hollywood eating babies, Harrison Ford and Helen freaking Mirren will headline the next Yellowstone spinoff, 1932. (Variety)

Bothari43 voiced the lament of the avid reader in her review of Finder by Suzanne Palmer. "The problem with finding a new author who is new to the scene and not just new to me is that there’s no backlog to dive into." Which authors do you wish had a longer backlist? (Cannonball Read 14)