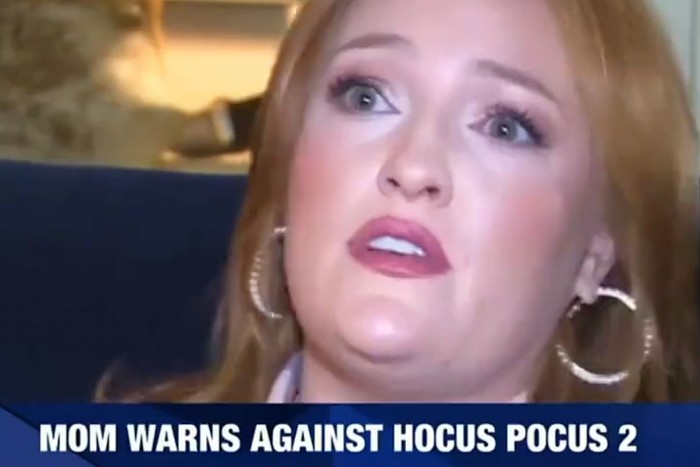 If you ever wanted a taste of my evangelical childhood, where I wasn’t allowed to watch He-Man or The Smurfs, and my mom once accused the neighbor kid of bringing a demon in the house with his Metallica T-shirt, Texas woman Jamie Gooch has gone viral after warning her Facebook followers that Hocus Pocus 2 will “unleash hell on your kids.” According to Gooch, you don’t know what kind of spells The Sanderson Sisters are casting and whether or not their dark magic can travel through the TV. In fairness, the movies are about harvesting children’s souls, which is very big with the QAnon set right now. But also, did you catch the part where it’s a freaking movie. (KWTX)

Buckingham Palace is reportedly demanding that the Times refer to Camilla as “The Queen” and not the “Queen Consort.” (Lainey Gossip)

The next James Bond will be a millennial, and not Gen Z. Presumably to avoid Dane Cook from crashing the set and proposing. BAM. Look at that callback. (Celebitchy)

From Roxana: This bear for president.

I swear a bear stole my Amazon delivery…no I haven’t been drinking! 😳🤣🐻📦 pic.twitter.com/B7xJkvy8nK

Elon Musk’s sudden reversal to buy Twitter is starting to look a hell of a lot like a delay tactic. (Daily Beast)

Speaking of Elon, imagine getting dragged by Lindsey Graham. (Uproxx)

I don’t normally make a deal out of people signing to talent agencies, but Amber Midthunder deserves all the good things. (Variety)

This too, shall not pass. pic.twitter.com/SSz8fKgRpK

Marvel nerds have been attacking Eiza González over apparently false rumors that she’s been cast as Elektra in Daredevil: Born Again, and she’d like them to stop now. (EW)

It’s amazing how effortlessly Dark Brandon destroys his enemies. You couldn’t plan this shot if you tried. (Mediaite)

Angelina Jolie is already getting the Amber Heard treatment. (Jezebel)

After recommendations from MsWas and NPR, KimMiE" ripped through P. Djeli Clark’s A Master of Djinn. She loved the story, the world-building, and most especially Fatma. "She wears stylish British suits and a bowler hat and makes sarcastic comments, and I love her." Which books would you recommend for great characters? (Cannonball Read 14)

← 'The Rings of Power' Remains Uncertain About Its Heroes and Villains, And Is Better For It | A Pothead's Perspective On President Biden's Pot Possession Pardons →