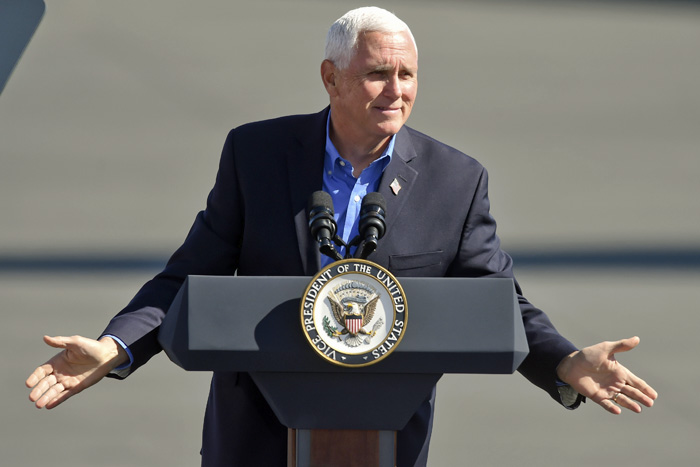 As the head of the Coronavirus Task Force, Mike Pence already spectacularly failed as Trump and the White House became the site of a super-spreader event thanks to its little “Piss on RBG’s grave” event in the Rose Garden. Now, at least five of Pence’s aides have tested positive for COVID-19, which has not stopped him from hitting the campaign trail. So in case it wasn’t clear, the Trump Administration’s plan for the pandemic is to keep doing jackshit. Good luck out there. (CNN)

Tina Fey’s Girl5Eva is the show for your girl band dreams. (Lainey Gossip)

Shia LaBeouf made a nude music video if that does anything for you. (Dlisted)

Apparently, Jennifer Aniston is not a fan of Kanye West ratf*cking the election, and she isn’t afraid to say something about it. Hell yeah. (Celebitchy)

RDJ’s team photoshopping Tom Holland out of this photo to do damage control for Chris Pratt bc they had no other photos of the two of them together is so…..funny cjcnfjcnkdnckcmckcmcm pic.twitter.com/PRo1FoDJxP

ICE is reportedly torturing detained African immigrants, so I dunno, if you’re out there maybe still thinking about voting Green Party or staying home and pouting because Bernie didn’t get the nom, maybe get over it and vote to stop this bullshit. If it’s not too much trouble. (The Root)

Dave Bautista endorses Joe Biden with a message on how being “tough” has nothing to do with being a dickbag bully like our president. (Instragam)

John Mulaney will host next week’s SNL, and I’m sure that’s going to make a lot of people very happy. (Deadline)

Anna Wintour “sidelined and tokenized” employees of color at Vogue. (The Cut)

No Time to Die may or may not go streaming only, and it may or may not put a nail in the coffin of the theater industry depending on who you ask. Probably a little of both. (io9)

Do you have any good scary book recommendations for Halloween? Cannonball Read’s Horror category can point you to more great reads. Randirock and pixifer both gave 5 stars to Riley Sager’s Home Before Dark. Or a review may guide you away from the not-so-great. About Mona Awad’s Bunny, andtheIToldYouSos says, "There’s some initial talk of Lovecraft, madness, and Lovecraftian madness, but that talk meanders without really going anywhere." (Cannonball Read 12)

A comedian should not be cancelled for offensive jokes. I'm not here for that nonsense. The biggest crime here is just how painfully unfunny, tired, and racist these stereotypes are. @ChristinaP, I'm actively fighting against this everyday, professionally & personally. Be an ally pic.twitter.com/PSBkGKYCnu

← 5 Shows After Dark: 'The Undoing' Premiere HBO, 'Forever Christmas' on Lifetime | How the Media Disarmed Team Trump's Hunter Biden Surprise Before It Could Explode →