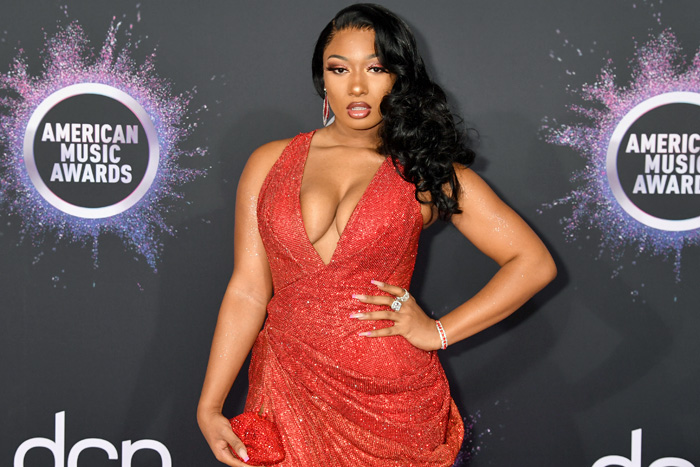 Megan Thee Stallion put a stop to rumors by revealing she was shot over the weekend and not arrested contrary to reports. She was the victim of a crime and was transported to the hospital by the police. (The AV Club)

Cardi B is sick of the internet after being called out for using an anti-Asian slur. She claims she didn’t know it was bad, but once you see what it is… (Lainey Gossip)

Chrissy Teigen, on the other hand, has every reason to hate social media after she found herself targeted by QAnon and can’t even post pics of her kids without being accused of child trafficking. It’s bad. (Dlisted)

And just like that, Kanye’s presidential run is over. That lasted what? A week? Week and a half? Let’s go with longer than Kim’s marriage to Kris Humphries. (Celebitchy)

Idris Elba doesn’t agree with censoring racist films or TV shows, but he does like the approach that HBO Max took with Gone with the Wind. (The Root)

Evan Rachel Wood shares her theory on why Hollywood is a hunting ground for abusers. (The Muse)

From Kristy: In memory of Lynn Shelton, a grant has been created for to help a woman or non-binary filmmaker, age 39 or older, make their first narrative feature. (IndieWire)

Postal workers are raising the alarm over the Trump Administration making a concerted effort to weaken the USPS just as we conveniently enter an election that will hinge on mail-in ballots. (Stars and Stripes)

How everyone who cares about justice and dignity and health and safety isn’t filling their timelines with this is worrisome. We’ll never know the truth again. Not that we ever knew enough about the numbers, but now any possibility of transparency is gone. https://t.co/Lvn7B8bcSF

Hey, remember when Mike Bloomberg pledged to spend hundreds of millions to defeat Trump? Uh, where the hell is it? (The Daily Beast)

According to James Marsters, Joss Whedon allegedly screamed at him after Spike became too popular of a character on Buffy, so I’m sure that’s healthy. (ScreenRant)

Jon Hamm joins the long list of actors who thought they were going to make a new Fletch and then didn’t. (Variety)

Lumenatrix found herself with no books on hand so searched her library for Dorothy L. Sayers’ Whose Body. "Lord Peter Wimsey is one of those characters that just sort of kept popping up in random places in my life. I think if you are at all into mystery novels you may have had a similar experience." Have you read any of the Lord Peter Wimsey books? (Cannonball Read 12)

This is Moose. He’s just having his smoothie. Metal straw because he’s an environmentalist king. 14/10 good boy would pet pic.twitter.com/i3YSYGjoBE