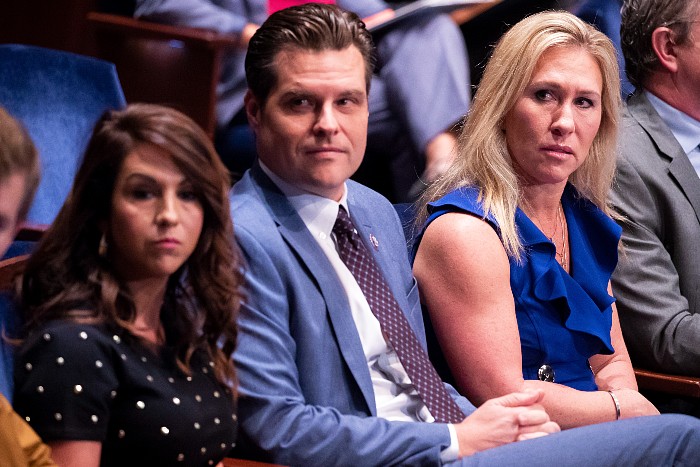 In a significant sign that the Matt Gaetz sex trafficking scandal isn’t going away anytime soon, his ex-girlfriend has reportedly secured immunity from prosecution in exchange for her testimony in front of a grand jury next week. Should be neat. (CBS News)

Euphoria’s Hunter Schafer and Dominic Fike could be a new power couple for their generation. (Lainey Gossip)

Farrah Abraham got arrested for slapping somebody. Again. (Dlisted)

Kirsten Dunst opens up about how she struggled to get over her fear of taking antidepressants, but they worked in the end. (Celebitchy)

Looks like I wasn’t the only who thought it was some sh*t that a certain plotline was unceremoniously dumped in The Book of Boba Fett Episode 3.

Before everyone asks if we’re going to touch this story, as of this post, Brian is cooking up a piece on the latest Joss Whedon shenanigans that should hit sometime tomorrow. Just FYI.

From Claude: Finding a castle on Zillow is WILD. (Twitter)

If you’re a Republican planning to post a MLK quote on MLK Day, yeah, go ahead and just don’t. (The Root)

And speaking of racism, Donald Trump dropped a whole bunch of it this weekend. But it’s cool, he’s totally going to pick a Black running mate and eliminate student loan debt when he wins in 2024, according to Twitter’s brightest minds. (Mediaite)

I have genuinely spent 10 minutes starting at this but, no, it really DOES appear to be true that a bunch of cryptobros just spent €2.6 MILLION - 100x the asking price - for a book at auction in the mistaken belief that they would therefore own the copyright in it. https://t.co/2HmaGWHKWF

In related news, Steve Aoki stopped a concert to show off his newest NFT, and in a sign that humanity isn’t entirely doomed, nobody gave a sh*t. (Born in Space)

Damn, Andrew Garfield even lied to Emma Stone about No Way Home. (IndieWire)

Martin Luther King Jr. Day seems like a good day to think about what it means to be an American. Wajahat Ali’s memoir, Go Back to Where You Came From, took Emmalita through the full spectrum of emotions about living in this country. "He is funny, smarter than me, and can make me look at the ugly underbelly while I’m laughing until I’m not laughing anymore." What writers have helped you find a different perspective? (Cannonball Read 14)

Restaurants are finally providing benefits for their workers. pic.twitter.com/5SnLnR0Edq