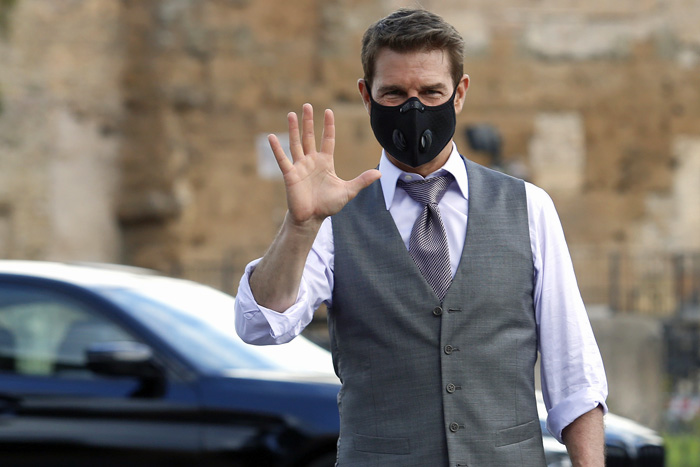 Leah Remini clocked Tom Cruise’s rant for filth right after it happened, but her statement to Tony Ortega is only just now getting play. In it, Remini accuses Cruise of staging the whole thing for a publicity stunt, and notes that Scientology’s views on illness don’t exactly track with Cruise being concerned with COVID safety. (The Underground Bunker)

Emilio Vitolo Jr. delivered Katie Holmes a birthday present Jamie Foxx never did, and I swear this link happening right after Tom was a coincidence. Honest to God. (Lainey Gossip)

A dog walker claims they caught Hillsong Pastor Carl Lentz having sex with a “younger celebrity.” Here we go… (Dlisted)

Alicia Silverstone brags that her son never gets sick because he’s “plant-based,” and also, I’m assuming from the years she spent regurgitating food into his mouth. Remember that? I’ll always remember that. (Celebitchy)

Gail Simone posted a great, heart-wrenching tale about the time she almost got to write a Princess Leia comic and meet Carrie Fisher in the process. (Gail Simone)

Amidst rumors of marital trouble, John Mulaney has checked into rehab for alcohol and cocaine addiction. The comedian has been open about his struggles with sobriety, and we wish him the best of luck. (Page Six)

The Russo Brothers have received roughly $50 million from an “undisclosed” Saudi Arabia bank. Not good! (Variety)

From Roxana: The log line should be enough to get people to read this: “A white woman calls the police on her Black neighbors. Six months later, they still share a property line.” (The Cut)

People are apparently getting off from COVID swabs. Thank you so much for sharing this one, Kayleigh. Really, you shouldn’t have. (Rolling Stone)

From Tori: The Strand magazine just published a previously unseen Shirley Jackson short story, so like, at least 2020 is going out in style? (Literary Hub)

The Duke and I, Julia Quinn’s first book in the Bridgerton series, was also faintingviolet’s introduction to all things Quinn. She’s now rereading the books in anticipation of the Netflix series Bridgerton, premiering on Friday. "Quinn writes great family dynamics, her humor works for me and had me laughing loud enough to startle the cats." What forthcoming adaptations are you looking forward to? (Cannonball Read 12)

And, finally, this new Blaire Erskine video is possibly her best one yet.

Another woman claiming to be Martin Shkreli’s girlfriend pic.twitter.com/j57V1oFEKq