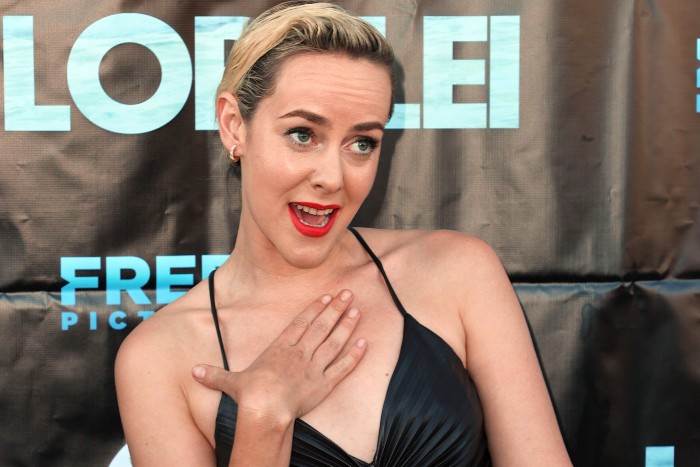 Do Not Abuse a Dog in Front of Jena Malone or She Will Chase You Down on the Streets of L.A.

Jena Malone has confirmed reports that she chased down a dog abuser in Los Angeles on Tuesday. The actress witnessed a man kicking and choking a small dog, stopped her car, and chased his ass down after he refused to stop abusing the dog. Spoiler alert: He got his comeuppance. (Variety)

To answer the question in yesterday’s headline, yes, Andrew Garfield actually is single after all. What a journey about the best onscreen Spider-man whose first film surprisingly holds up. Second one … not so much, but not because of The Garf. The Garf is good. (Lainey Gossip)

Jada isn’t angry with Will, but she does think he “over-reacted.” (Celebitchy)

From James: The future is now and it sucks.

As seen on Weibo: Shanghai residents go to their balconies to sing & protest lack of supplies. A drone appears: “Please comply w covid restrictions. Control your soul’s desire for freedom. Do not open the window or sing.” https://t.co/0ZTc8fznaV pic.twitter.com/pAnEGOlBIh

how it started how it’s going pic.twitter.com/TIg9Oj5ews

It’s time to experience @WestSideMovie the way absolutely no one intended. pic.twitter.com/hVn4fyZufA

Attorneys general are threatening to investigate the NFL for being “overtly hostile to women.” That sounds bad. (Jezebel)

What a weird day today must be for Grant Gustin. (The Wrap)

Junior Cannonballer, Bibliophile, has a recommendation for an ongoing series you can read with your family. "The Nevermoor series by Jessica Townsend has been one of my favorites since I listened to the 1st book [The Trials of Morrigan Crow] as an audiobook in a long car ride with my family a few years ago." Do you have family friendly series to recommend? (Cannonball Read 14)

Been a fan of Eric’s writing and insightful commentary for many years. My deepest condolences to his family.

RIP to our friend @EricBoehlert pic.twitter.com/hdVYeithIG

← 5 Shows After Dark: 'Jimmy Savile: A Very British Horror Story' Premiere Netflix, 'The Masked Singer' on Fox | The Baby in HBO's 'The Baby' Is Evil, Like All Babies →