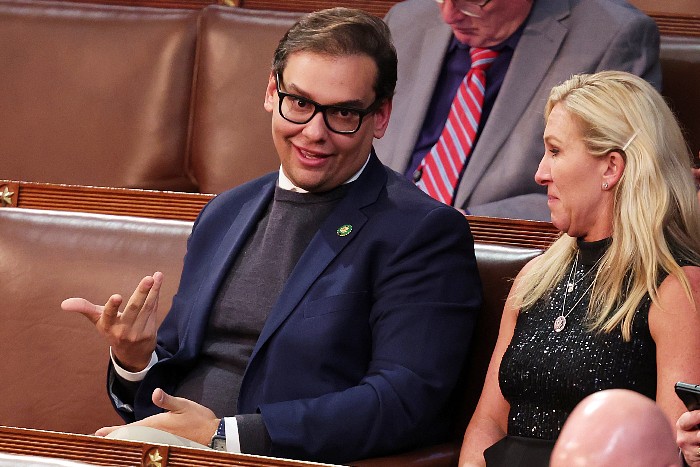 As George Santos’ lies continue to mount up — Did you hear he was a volleyball champ at a college he never went to? — a new exposé interviewed people connected to his campaign, and the rampant fraud was just the tip of the iceberg. Santos’ finances are reportedly a mess and suspicious as hell in ways that are probably not going to be overlooked by the FEC. Or totally will because this country bends over backward to go easy on Republicans. (TPM)

A poster for Demi Lovato’s Holy Fvck album was banned in the U.K. for being offensive to Christians? Hey, that’s America’s thing! (Dlisted)

From Jen: A pigeon wearing meth “like a backpack” was captured inside a British Columbia prison yard. (CBC News)

Turns out the U.S. was never really going to ban gas stoves, but you’re not going to stop hearing about it now because Fox News loves a good dipsh*t freakout. (Gizmodo)

Kyle Richards defended Gwen Stefani’s “I’m Japanese” comments, which I’m sure will make everything better. Paris Hilton’s aunt is on the case, everyone. (Page Six)

Sydney Sweeney and Glen Powell are apparently making some sort of romantic comedy that already has too much gorgeousness. These people are way too good looking! (Deadline)

James Cameron thinks Avatar 2 is the end of streaming? Dude, what? (Variety)

The first book in Elly Griffiths’ Ruth Galloway series languished on Elizabeth’s shelves for years until she picked it up a few months ago. Now she’s kicking off her first Cannonball Read with the 12th and 13th books in the series. "The series revolves around Dr. Ruth Galloway (use her title please, she’s earned it), a forensic archaeologist specializing in bones and the bronze age, who on occasion is called in to help the local police when they find remains in Norfolk." Have you looked at the unread books on your shelf lately? (Cannonball Read 15)

The other day, Seth made it past my Twitter ban with a heartwarming Kate Winslet video, and now, Tori has made it through with… well, this. I regret nothing!

Anyway, Matt Berry narrating nature documentaries is everything you imagine it would be and more pic.twitter.com/YSLU0tpz3k