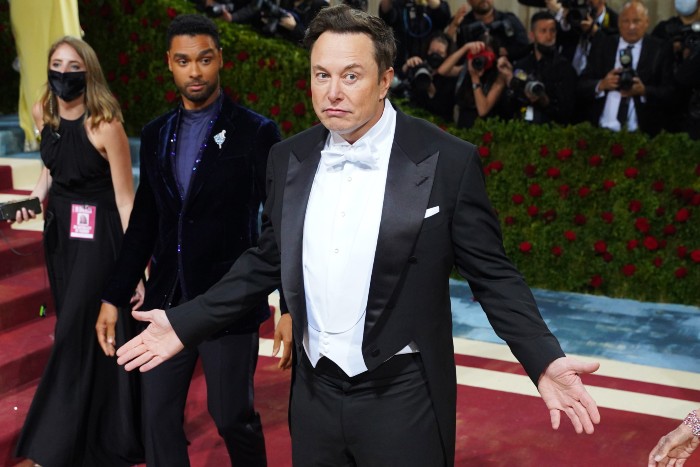 What New Way Did Elon Musk Suck as a Human Being Today?

Like most right-wing edgelord d*cks, Elon Musk’s Twitter account has no shortage of transphobic jokes, so of course, it’s come to light that he has a trans daughter who is changing her name for “Gender Identity and the fact that I no longer live with or wish to be related to my biological father in any way, shape or form.” Sincerely smart move, kid. Never let anyone tell you “blood is thicker than water,” or any of that nonsense. Live your best life. (TMZ)

On the opposite end of the spectrum, Jennifer Lopez lovingly uses they/them pronouns for child Emme while performing a duet together. (Lainey Gossip)

Khloe Kardashian may have gotten her fake butt removed, and it’s terrifying how I’m like a pig in sh*t reading this. Am I the baddie? (Dlisted)

Wait, Lauren Graham and Peter Krause were a thing this whole time? (Celebitchy)

Aside from the cast, the only celebrity to attend The Daily Wire's premiere of their Gina Carano movie is Rob Schneider. pic.twitter.com/WAc6YySms6

From Dustin: Maya Rudolph was originally offered the role of Eve Polastri in Killing Eve, but turned it down. (IndieWire)

A look at how a cozy relationship between Ron DeSantis and Fox News might make him the GOP nom instead of Trump. (New Yorker)

And speaking of GOP crazy, Facebook pulled down Eric Greiten’s batsh*t campaign ad that is almost definitely going to get somebody killed. Twitter, on the other hand, just slapped a warning on it. (Mediaite)

This, from Megan Rapinoe, reads as a very decent summation of the correct answer to any “trans person in sports” debate, and also, a pristine example of what personal politics look like when you operate with the value of compassion first. pic.twitter.com/7YjYc5MRdg

Because the initial grooming allegations against Ezra Miller weren’t bad enough, they’ve now been accused of threatening another minor and flashing a gun. This ain’t getting any better, Warner Bros. Discovery! (Daily Beast)

Bill Hader on why Barry Season 3 was “almost like writing a different show.” (The Wrap)

As the next Marvel Phase 4 films start to hit, Kevin Feige said it will become clear where this new saga is heading. Calling it now: Secret Wars, baby. (Variety)

Do you read books with the kids in your life? Katie71483 loved the sense of place and culture in Marti Dumas’ Wildseed Witch. "Hasani goes on a real journey of self-discovery and I urge you to send your tweens on that voyage with her. Go on it with them." (Cannonball Read 14)

I asked some cops to read to kids but they waited outside the door for an hour without checking to see if it was locked pic.twitter.com/dm95CcQkCD