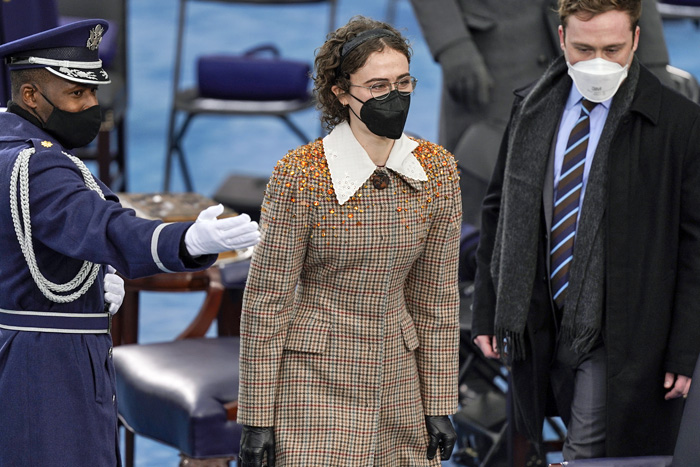 We’re not even two weeks into the Biden administration, and already, Ella Emhoff is already being cyberbullied for the crime of having a dad who married Kamala Harris. Let me just spell this out for the nihilist shitmongers out there. Ivanka Trump is an almost 40-year-old woman who actively participated in her father’s administration. That’s fair game. Meghan McCain is a 36-year-old woman who gets paid to go on The View and parrot right-wing talking points. Also fair game. Ella Emhoff, on the other hand, is a 21-year-old art student who has committed zero crimes, and no, being the step-daughter of a WOC you hate doesn’t count. Grow the hell up. (Justin Boldaji)

P.S. Note that the dude who wrote that tweet is pushing his children’s book about “loving you who are on the inside” while mocking a college student’s clothes. The internet was a mistake.

Jason Lewis from Sex and the City has been shooting rice at cats, which is apparently an asshole thing you can do. (Dlisted)

Melania Trump wants to keep “Be Best” going even though she’s no longer in the White House, and that shit has to be one of the biggest jokes of the past four years. (Celebitchy)

You're gonna watch this video about sloths and think you know how it ends.

BUT YOU DO NOT. pic.twitter.com/YL5qotrcpS

A memorial to John Lewis will replace a Confederate monument in the DeKalb County Courthouse as it goddamn should. (The Root)

Speaking of conspiracy theories, Trump filled an alarming amount of teachers’ heads with lies about him winning the election, and now, they’re repeating that shit to their students. Oh good. (BuzzFeed)

59-seconds of truth bombs on the requirements of elected leaders in America…pic.twitter.com/N2o00KATDC

From Nicole: When no one gave her freedom, this soul queen took it for her own damn self. I didn’t think I could love Tina Turner any more, but I was wrong. (The Atlantic)

From Petr: My friend, doctor and activist Youssef El-Gingihy, wrote this heartbreaking piece about how Covid took his father like it has many thousands of others during the pandemic, and how if the UK public sector hadn’t been so hollowed out by decades of neoliberal economics they might still be here with us. (The Guardian)

From Roxana: The New Yorker’s Rachel Syme spoke with Michelle Pfeiffer about her career, and it’s a great read. (New Yorker)

Jomidi found Simon Stephenson’s Set My Heart to Five hard to explain. "Let’s start with the genre, my library copy had three stickers on the spine-Science Fiction, Humor, and Social Issues." This funny, sweet, thought provoking book is set to be turned into a movie directed by Edgar Wright. What book and director would you pair for an adaptation? (Cannonball Read 13)

Huge thanks to Hannah for coming in with some clutch, last minute animal content: