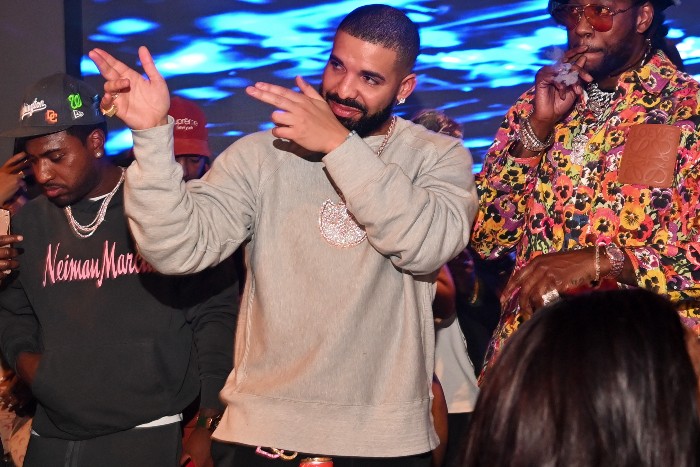 Drake Puts What in His What So Women Won’t Steal His What?

Wow, OK. So Drake is reportedly about to be sued by an Instagram model for allegedly putting hot sauce in a condom so his sperm won’t get stolen. Now, I know what you’re thinking, “ouch” and “WTF,” but stay with me. If this story is true, Drake allegedly does this after sex, which the model found out while, well, trying to steal his sperm. Not really sure how there’s a lawsuit there, but the important thing is none of us will ever look at Frank’s Red Hot the same again. God bless. (Dlisted)

Now that we went down that spicy tunnel, in the midst of writing this post, Jason Momoa and Lisa Bonet announced that they’re divorcing. Should I have made that the headline? Probably. Did I hold strong on hot sauce jimmy cap like a moron anyway? Uh huh. (Instagram)

The only thing missing from Ben Affleck’s interview with Matt Damon for Entertainment Weekly cover story is the gossip. (Lainey Gossip)

Megan Fox and Machine Gun Kelly are engaged. (The Cut)

From Roxana: An important investigation! (Eater)

Tom Brady revealed his new clothing line, and it’s literally just a white hoodie with the word “Brady” on it. He, no joke, spent three years working on it. (Mediaite)

Pixar fans are apparently mad that Turning Red got pushed to Disney+. We’re in a pandemic. Get over it. (Gizmodo)

I’m going to voice an unpopular opinion here, but I genuinely believe Jamie Lynn Spears tried to help Britney Spears get out of her conservatorship to the best of her ability. She was only 17 when the whole thing started, and we’re talking about a complex apparatus that took over a decade to unravel thanks to the state of California happily looking the other way. Yes, Britney lashed out at Jamie Lynn on social media, but Britney ain’t exactly the most reliable source. Don’t get me wrong, she absolutely, 100% deserves to be free, but that doesn’t mean taking every Instagram video as the gospel truth. Good talk. (The Daily Beast)

Baxlala loves exploring the natural world around her home in the Pacific Northwest, making Kelly Brenner’s Nature Obscura right up her alley. "I’m much more of an animal person than a plant person…but I loved Brenner’s voice so much that I even enjoyed learning about the plant life she was exploring." What do you love to explore around your home? (Cannonball Read 14)

This is who we all are now
pic.twitter.com/CSlxPvinpy

← 5 Shows After Dark: 'Leave it to Geege' Premiere Lifetime, 'Batwoman' on The CW | Armourer on 'Rust' Sues Prop Supplier as Alec Baldwin Denies He Isn't Complying with Investigation →