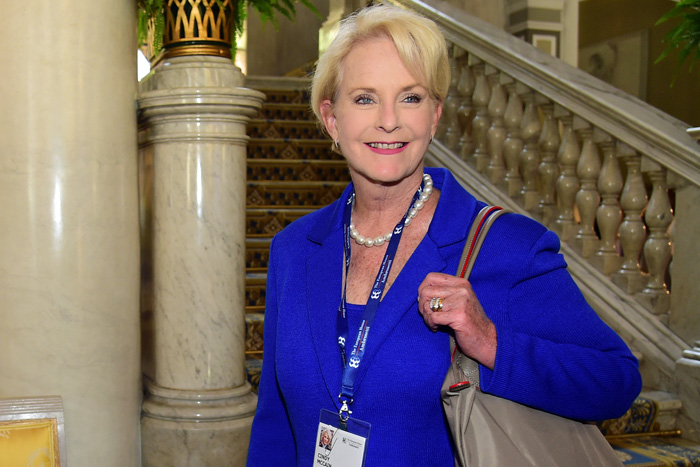 In her most public rebuke of Donald Trump yet, longtime Republican Cindy McCain will officially endorse Joe Biden for president while her daughter Meghan continues to cheerlead Trump’s anti-choice nominee for the Supreme Court. (AP)

We didn’t really hit the WandaVision trailer, which looks fun as all hell, so here’s Sarah with an excellent breakdown on how she hopes Marvel handles what looks like a “House of M” adaptation with a little more… tact. (Lainey Gossip)

For a brief second, it looked like the Eleventh Doctor and the Mother of Dragons were a thing, but that is definitely not her in these photos. (Dlisted)

Brad Pitt signed onto the Fast Times at Ridgemont High charity read suspiciously *after* Jennifer Aniston was on board. (Celebitchy)

Cardi B is getting hit with a defamation suit for saying Trump supporters are racist? Where is the lie though? (The Root)

Vanessa Bryant is suing the L.A. County Sheriff’s Department for leaking photos of Kobe and Gianna from the crash site. What the f*ck? (TMZ)

The Making of Lost: An Oral History of the Pilot Episode (Empire)

I don’t know if I’ve mentioned my love for Jim Wright, but he’s delivered another barnburner on the petulant children who refuse to vote for Biden. (Stonekettle)

Cannonballers celebrate National Hispanic Heritage Month September 15 through October 15, but they read books by Latinx writers all year long. From Silvia Moreno-Garcia’s horror-tinged historical fiction, to Adriana Herrera’s Afro-Latinx romances, to Roberto Avant-Mier’s non-fiction history of Latinx rock, plus kids’ books and cookbooks, there’s a book for every kind of reader. Take a look at their Latinx tag, and see what you might be inclined to read this month. Do you have a favorite Latinx author? (Cannonball Read 12)