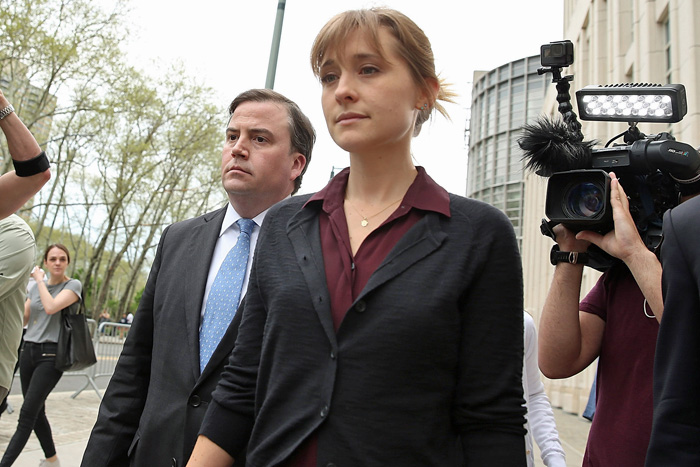 Allison Mack Rolled on Keith Raniere for a Lighter Sentence

During NXIVM founder Keith Raniere’s trial, Smallville actress Allison Mack notably did not testify against him, which presumably was in her best interests considering she was essentially his No. 2 in the sex trafficking cult. However, a new sentencing recommendation has revealed that Mack did, in fact, work with the feds and provided them with a recording of Raniere concocting the infamous vagina branding ritual. For her cooperation, the government is officially requesting a lighter sentence for Mack, and this development is not going over well with NXIVM survivors. (Daily Beast)

So Vin Diesel basically said The Rock needed some “tough love” on the set of The Fate of the Furious to improve his performance. Not that The Rock is Daniel Day-Lewis, but 99% of Diesel’s acting in these things is mumbling the word “family” while never making a single facial expression. (Lainey Gossip)

Billie Eilish apologizes for mouthing a racial slur and speaking in an offensive “accent.” Wow, Jesus, none of that sounds good. (Celebitchy)

#SesameStreet is marking Pride Month by showing a type of family that has never been seen in the 51-year history of the iconic children's television show.https://t.co/880ARGychy

Roxana appeared on NPR’s Pop Culture Happy Hour to talk about We Are Lady Parts, its overall excellence, and why it deserves a second season. (NPR)

Spielberg’s West Side Story isn’t even out yet, but it’s already landed Rachel Zeigler the role of Snow White in Disney’s live-action adaptation. (Variety)

Britney Spears is starting to reveal details of living under her dad’s conservatorship. I used to joke that he trotted her out like a caged circus bear, and I really wish that didn’t turn out to be accurate. Goddamn. (Vulture)

Excellent thread debunking the myth that young people will push evangelicalism to the left. Never going to happen. In that ecosystem, you either become a die-hard zealot for the Republican Party or you GTFO. I highly recommend the latter. (Chrissy Stroop)

I demand to know who is responsible for this https://t.co/baPmO8Qdim pic.twitter.com/YqLOzzHorg

The more I read about it, particularly this latest interview, the more I get jazzed for Leslye Headland’s Star Wars: The Acolyte series. (AV Club)

If the rumors are true and Chrissy Teigen really is setting up an Oprah interview, Courtney Stodden wants in. (EW)

The “woke” Gossip Girl reboot is sounding tragically misguided because these characters are supposed to be awful. That’s the whole point. (Jezebel)

Cannonball Read is always delighted when an author finds a review and reaches out on social media or on the blog to say thanks. Sometimes an author likes the way a reviewer reframes a synopsis, and other times an author sends along a Spotify playlist in thanks. Do you have a favorite author interaction? (Cannonball Read 13)

Sorry, f*ck the doom-and-gloomers, this administration is not your enemy, and things have fundamentally changed. Freaking Fox News was flipping out today because high school kids are making enough money to afford college. Oh no! But if you hop on Twitter, Biden is the same as Trump because he didn’t click his heels together and immediately fix a broken Senate with a twinkle of his nose, or whatever white collar pseudo-communists are trying to use for a stick that day. Bite me.

REPORTER: 'Does the president believe that a 15-week-old unborn baby is a human being?'

JEN PSAKI: 'Are you asking me if the president supports a woman's right to choose? He does.' pic.twitter.com/pBdd6vpDaZ