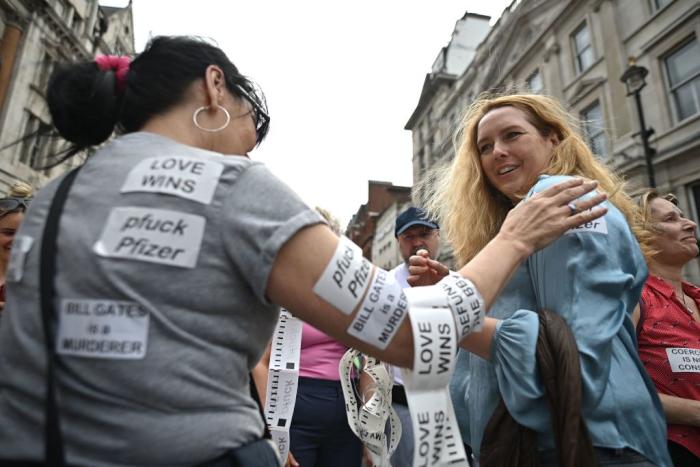 Sherri Tenpenny Is Why We Can't Have Nice Things

I planned to take things easy today. Work and home life are busy, so I figured that at most I would write up a brief trailer promo, something like that. Then I saw this clip on Twitter, and a red curtain fell over my vision, and that all went out the window.

“Doctor” Sherri Tenpenny, in her own words:

Testimony going off the rails now.

Tenpenny is claiming there is metal in the vaccine that causes forks to stick to your forehead. She saw videos of it on the internet, you see

So to sum up, according to this Doctor of Osteopathic Medicine — which is to actual doctoring what the Rod of Iron Ministries is to Christianity — the little bit of metal she thinks is in the vaccine is magnetizing people to the point that cutlery sticks to their faces. She knows this is happening because she saw pictures on the internet. And so here she is testifying in front of the Ohio House Health Committee — 70% of whom are Republican, so you already know the state’s hosed — in favor of a bill restricting Ohio businesses and schools from requiring Covid-19 vaccinations. Most of you don’t need me to point out this is bullshit. For the anti-vaxxers who googled Tenpenny’s name to get here, I say: Welcome! Pull up a chair so we can discuss why you need to stop listening to cons and quacks.

Osteopathic medicine is one of those things that you either believe in or you don’t. D.O. doctors get some standard medical training, plus a whole bunch of pseudoscientific quackery that claims massaging the skull can cure infectious diseases, among other things. It does not. Osteopathy is one of those fields like massage therapy and chiropractors where you get well-intentioned, well-educated people doing good, and you also get more nuts than in your average Snickers bar. Sometimes they help, sometimes they hurt, and sometimes they dress it all up in more mumbo jumbo than your weekly D&D game. If you believe in it, that’s your business; we can disagree with no harm done.

The harm begins when your so-called experts start spreading their easily disprovable nonsense to the gullible among us. Watch the brunette in glasses nod along to Tenpenny’s fearmongering. There she stands, looking like someone’s cheerful aunt, spreading lies. The US and UK vaccines contain no metal. Some vaccines do contain metal but, and I can’t believe I have to point this out to anyone over the age of 8, aluminum is not magnetic. I know magnetism a mystery of the universe (“F**king magnets, how do they work?”) but this is basic. Even if aluminum was magnetic (it isn’t) and even if the Covid vaccines had aluminum in them (they don’t), the amount injected into your body would be too small to have an effect. If it could, the 3-4 grams in the average human would probably make someone explode any time a doctor put them in an MRI. You’d need to replace your wallet with a Faraday cage so you didn’t wipe your credit cards. But we don’t. Because science doesn’t work like that, no matter how many times the medical equivalent of a damp incense stick tells you otherwise.

So we’ve got lunatics in lab coats brought in as experts by health committees made of politicians so behind on medical knowledge they think homosexuality is a choice and embryos are people. They get promoted by state and national leaders and are amplified by social media until they are eventually banned to self-congratulatory applause, far too late to do any good. The country’s Karens nod along because a lifetime free of the plagues that made most of human history so exciting has taught them science is irrelevant and facts don’t matter, only fears. They’re scared of vaccine-caused autism because polio and lockjaw are no longer concerns. They can worry about forks sticking to their foreheads because their kids don’t die of scarlet fever. It’s anti-intellectualism of the worst sort, and leads to parents killing their kids through inaction.

I shouldn’t have to get angry about this. It is the 21st century. In just 200 years we’ve gone from medical researchers having to steal corpses out of graveyards to having a preventative, cure, or at least treatment for illnesses that wiped out entire civilizations. No longer are we forced to treat injured limbs with hacksaws and boiling tar. We can’t always afford the cures thanks to a healthcare industry run by vultures, but they exist. Yet rather than put our faith in science we put it in cider vinegar, colloidal silver, and prayer. We’d rather risk adding to the official 600,000 Americans dead from Covid than allow businesses to require vaccines of their customers, and schools of their students. We’d rather let sick people infect hundreds in closed environments than require they do the bare minimum for the rest of us. If they only got themselves killed through their ignorance I wouldn’t care so much, but they kill their kids, and they kill the immune-deficient, the elderly, and the simply unlucky. It needs to stop. Our government needs to stop amplifying the deluded and greedy quacks who are using a pandemic to promote unsafe theories. Unfortunately, the inmates run not only the asylum but every red state in the nation. And it doesn’t seem like they’re going anywhere.

Update: A reader was kind enough to send us this relevant tip:


NEW: Spokesperson for State Medical Board of Ohio emailed me this statement about Dr. Sherri Tenpenny who falsely told lawmakers that vaccines magnetize people. pic.twitter.com/R2WoLQ0zb2


I’m no doctor but to me that sure sounds as though no one should bother making an appointment with Dr. Tenpenny on or following October 2nd. She won’t be in the office.

Update x2: A number of commenters have called me out on the “Rod of Ministries” comparison above, which is fair. I wrote while outraged, never a good idea, and I made a snap judgement based on Tenpenny and Sean Conley’s performance as Donald Trump’s doctor. While it’s true that the origin of osteopathy and their historic use of cranial and spinal manipulation to cure various ills aren’t exactly rooted in the scientific method, it’s also true that they weren’t the only medical professionals to start there. Many/most doctors of osteopathy are consummate professionals who disregard the OMT on which their school of medicine was founded. I was wrong. More accurate information on the subject than I provided can be found here.