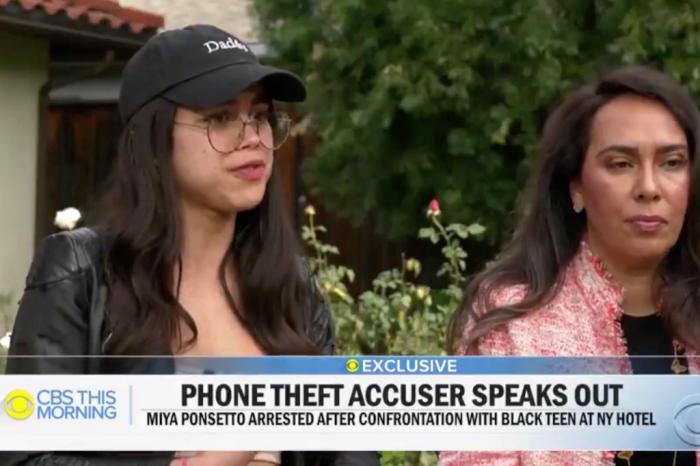 You’ll be forgiven if you haven’t kept up with the latest of the “Karens,” SoHo Karen, a 22-year-old woman named Miya Ponsetto who falsely accused a 14-year-old Black teenager — the son of jazz musician Keyon Harrold — of stealing her phone before assaulting him in a New York hotel (the encounter, which was taped, can be seen in the interview below). Ponsetto was arrested in California earlier today on a fugitive warrant, although in keeping with her brand, she refused to stop her car after she was contacted, and she had to be forcibly removed from it by the police when she finally arrived at home (she also tried to slam the door on one of the deputies, but she’s white, so she did not get shot in the back).

Before her arrest, Ponsetto gave an interview to Gayle King for CBS This Morning. She not only makes it so much worse but behaves with the same level of smugness that those white supremacists did inside the Capitol building. Watch the interview, and if you are short on time, watch between the 3:30 and 4:45 mark, when she says to Gayle King — THE Gayle King — “Enough, Gayle.”

The 22-year-old woman caught on camera allegedly physically attacking a 14-year-old Black teen and falsely accusing him of stealing her phone was arrested in California.

In an exclusive interview, Miya Ponsetto and her lawyer spoke with @GayleKing hours before she was arrested. pic.twitter.com/ezaGkcWZ8j

A few things here: She never actually apologizes, except in that fake “I’m sorry he was offended” kind of way. Second: There is nothing “super sweet” about her, and how dare she describe herself thusly. Third: She seems to justify her actions by repeatedly saying that her phone was gone, as though that gave her the right to assault a teenager. Fourth: That hat. THAT HAT? What was she thinking? Who let her appear on camera with THAT HAT? I’d blame her lawyer, but fifth, as you can see from the video, her lawyer is overmatched. You can see her trying to shush her client under her breath, and her expression is often one that suggests, “There’s not enough of Daddy’s money in the world for this.”

its the way her lawyer just sits there, zoned out, for me pic.twitter.com/HT4krm8bk7

But the hand. THE HAND.

i really just keep watching it over and over pic.twitter.com/jrd3NGXtSO

“Daddy” needs to take away her credit card and let her rot in a prison cell for a few months. Some consequences might do her some f**king good.