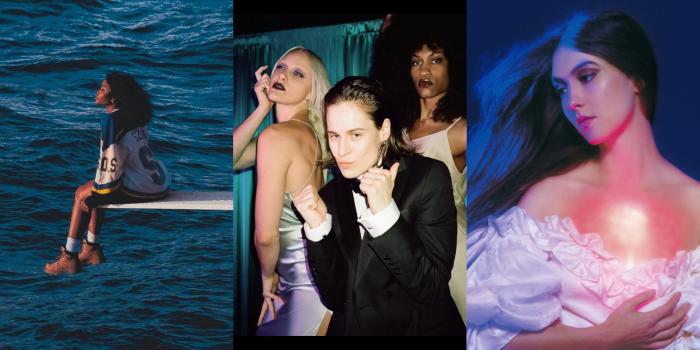 Three Albums for Winter: SZA's 'SOS'; Christine and the Queens 'Redcar les adorables étoiles' and Weyes Blood 'And in the Darkness, Hearts aglow'

Here’s three great albums perfect for the Northern Hemisphere’s… much too warm winter. I’ve been listening in my … not that warm Southern Hemisphere Summer.

SZA’s SOS: A Winter Album Waiting for the Summer.

With her second album, SZA has proven she is the rarest of R&B/Pop/Hip-Hop stars nowadays: An album artist. She has released two musically and thematically cohesive works, not just a collection of standalone singles or Spotify filler like Drake. SOS is an album released during a winter that longs for a summer, a clever choice to tell a story of overcoming heartbreak. This is an album about the phases of break-up grief but written from the hindsight of the one who has gone through all of them, and now is single, hot, and ready to get down. Or in other words, SZA’s is writing about the Winter of her discontent just as Spring and Summer are around the corner. Depression (“Nobody Gets Me”), bargaining (“Snooze”), anger and/or denial (“Kill Bill”, “Seek & Destroy”) are still there, they still hurt, but a lot less, after passing through Acceptance (“Gone Girl”, “SOS”). This is an album about the moment things start hurting less, when things start getting better, and when you can also have fun with what hurt once. Though a bit overlong, SZA’s SOS colors those emotions with a hint of tongue-in-cheek and a hint of earnestness, coalescing into a breezy but intoxicating sound.

Christine and the Queens, going by the name Redcar for his third album, is an artist whose work is almost inseparable from his own journey as a person, in particular, genderqueer and transmasculine. That would be self-evident for artists in any other medium or genre, but not at all common among Pop Singers, more so when you have reached the levels of crossover popularity Christine has (still not enough though). Christine has made his career by infusing lyricism, ambiguity, and introspection into accessible, melodic, and danceable Bops. So, what happens when this artist needs to channel the darkness he has been going through? Written in the wake of his mother’s death, physical injuries and major milestones in his gender journey, Redcar les Adorables Étoiles (Prólogue) is Christine’s most challenging, darkest and perhaps less accessible LP so far. But also, one of his most compelling and interesting. His third LP doesn’t have the bittersweet sound of his two previous classics, instead going for booming Synth-Pop, Prog-Rock, and French 80s new wave (no Pop Artist today makes music big like him). The songs blend into each other in moody, impressionistic lyrics, in contrast to her more conversational style. This one takes a while to grow on you, it’s perhaps uneven in comparison with Chris or Chaleur Humaine, but there’s something about it that will require you to listen to it on repeat, layering itself. And after five loops or so, it clicks on you: This is the first step of a catharsis, and Christine is inviting you to witness. Like with everything he has done so far, it is unmissable. Though perhaps not danceable this time. This time.

Wonder how big Weyes Blood would’ve been in the 60s, 70s, or even during the 90s? Her style, sound, and voice are evocative of that intersection between North American Folk, Protest Song, Psychedelia, and Soft Rock. But Weyes Blood is doing way more than just rehashing the heritage of Joan, Joni, Janis, or Stevie. Instead, with her fifth album, Weyes is preserving and actualizing a tradition in American Music: making music that is, first and foremost, beautiful, poetic, and meaningful. And In the Darkness… is also a Pandemic album, and for all the longing and alienation that characterized all the other Pandemic albums I’ve reviewed, this LP is also infused with subtle calls to action (“Children of the Empire,” “The Worst is Done”), and for that very same reason, it might be the most joyful of the three albums in this review, even though it has the “slowest” of sounds here. Weyes Blood has an energetic voice that, eventually, eschews anxiety and longing for determination and empathy (“It’s not just me, it’s everybody”, “Grapevine”), making And In the Darkness… the kind of Winter Album that prepares you for what Spring demands.


← George Santos Stole $3,000 from a Homeless Vet and His Dying Dog | How 'New Amsterdam' Ended and Why It Was Cancelled →