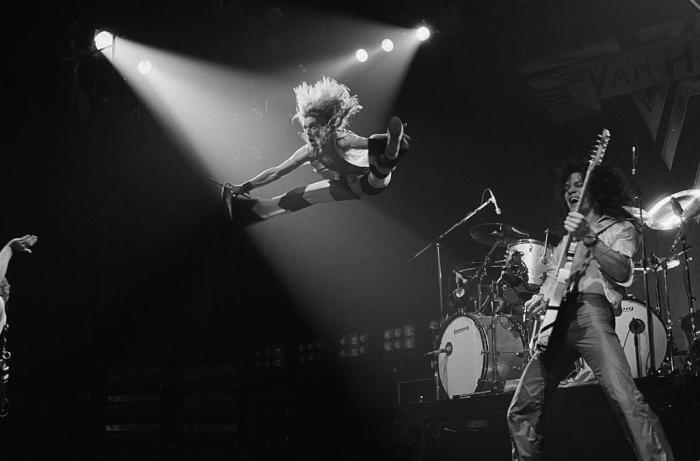 The Best Damn Music Video of All Time: 'Jump' by Van Halen

Eddie Van Halen’s death hit me hard, man. It did. When the great guitar virtuoso passed away late last year, at just 65 years of age, it felt like a part of my youth went with him. As a teenage guitar player he had been one of my greatest idols and influences. He still is, to this day. In the months since Eddie’s passing, I’ve been on a little journey of Van Halen rediscovery. In the past few years I hadn’t listened to them much, but since Eddie left us I’ve been revisiting my favourite albums of theirs, and I’ve been having an amazing time. For me, the essence of Van Halen really is contained within the years 1978-1984. The initial Roth years, in other words. No offence, Sammy Hagar, you’re by all accounts a really nice dude and you’ve got a great set of pipes on you, but when it comes to the entity that I consider to be the peak expression of what ‘Van Halen’ is supposed to mean—or at least mean to me—it’s the wild and mercurial run of albums from 1978’s ‘Van Halen’ to 1984’s…’1984’.

It’s the latter album, which began their transition into more polished, synth-drenched material, that contains one of the band’s biggest hits. This hit also spawned what is undoubtedly their greatest video.

And by ‘worst’ I obviously mean ‘greatest, without a doubt greatest.’

I’m talking, of course, about ‘Jump’.

You may have noted by this point that I’ve already written a piece about ‘the best damn music video of all time’. And that I’d written it about Kansas’ hairy and incredible clip for ‘Carry On Wayward Son’. It may then seem illogical to write another piece now with the same title on a different video. How can there be entries in the top spot after all. The fact of the matter is there can be. There can be more than two. Science and rigor are not welcome in the halls of hyperbole. Just like ‘the best’ Bob Dylan song more often than not happens to be the one I’m listening to in the moment, so too is the best damn video the one I’m thinking about at the time.

Because, please, look at that video again.

For a start, look at the quality. And I mean the actual video quality.

This is a video from the official Van Halen YouTube channel, of the band’s biggest hit, with over 130 million views, and the best quality that is available for all of that is one notch above ‘potato’. 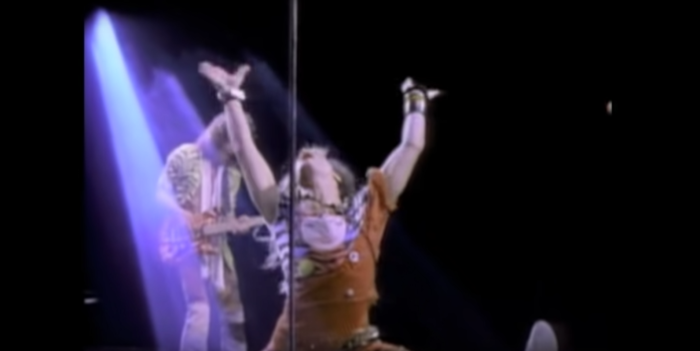 It’s incredibly endearing is what it is. The band have videos up on their channel from their first album that are better quality than ‘Jump’. Why? I’ve no idea. But I love how it adds to the general vibe of the video, which is: ‘The boys just grabbed a few cameras one weekend and shot this themselves on an abandoned sound stage.’ I was having problems with my internet connection while writing this piece. Pages were slow to load. Sometimes they had to be refreshed halfway through. And the only way any YouTube video would play, was when you set the video quality settings to minimum. Except ‘Jump’. ‘Jump’ just played as is.

The quality certainly stands in stark contrast to the budget allocated for David Lee Roth’s hair and make-up.

Which is exactly as things bloody well should be!

How else would the golden-haired master of preening be able to serve up the looks he does in ‘Jump’?

Because it’s not just one look. 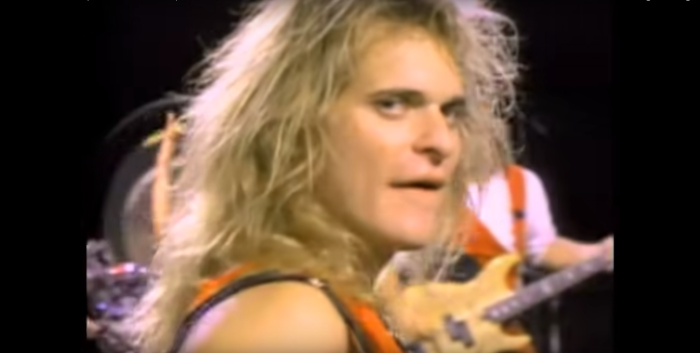 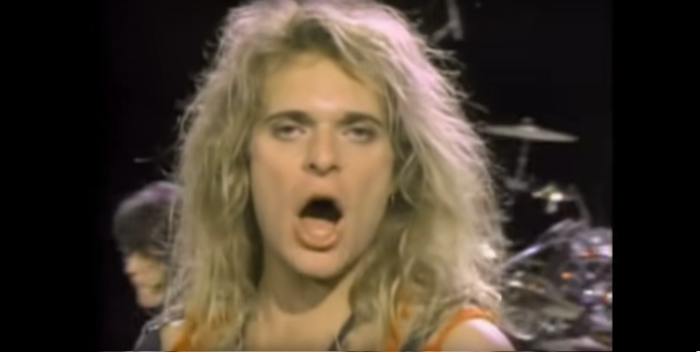 Good old Diamond Dave lets rip throughout the entirety of the video, just straight up ladling spoonfuls of looks directly into the audience’s eyes. 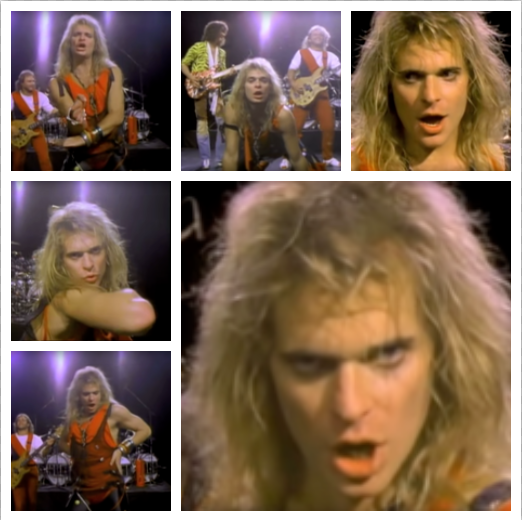 Talk about a lost art form. Who does that these days? I don’t see Imagine Dragons delivering poses like that.

You’ll notice that I haven’t said anything about Dave Lee Roth’s outfit in this video. That’s just because this is 1984, and if Dave Lee Roth isn’t dressed in some sort of torn, skin-bearing, trash hair ensemble, then that’s what you remark on. As it is, he is, and the world is spinning as it should be.

As if that wasn’t enough, Diamond Dave delivers even more bang for your buck. To wit: The word ‘jump’ is said eighteen times in ‘Jump’. For four of those ‘jumps’ in the video, Dave Lee Roth jumps:

I like this a lot because I’ve always been fascinated by the meaning of ‘Jump’. Famously, though Eddie was largely responsible for the composition, it was Roth who came up with the lyrics for it (with help from roadie Larry Hostler) after seeing TV footage of a potentially suicidal jumper and ruminating on the fact that one of the onlookers would inevitably call out for the person to ‘go ahead and jump’. That’s pretty grim stuff. The actual music of ‘Jump’ is bright and major key. The two would seem to be greatly at odds. Which is why the initial inspiration for the ‘jump’ refrain was abandoned in favour of a more general exhortation to live one’s life to the fullest. This has always cracked me the hell up. As a message of defiance, of validation, of bold daring in the face of life’s uncertainties, the advice ‘Might as well as jump’ is second to none.

‘My husband left me!’

‘I’m not sure if I have the guts to move across the country to a town I’ve never lived in.’

It’s great! And it came from the same poets who, while exploring the metaphorical horizons of the word, also decided to jump a lot.

What’s not to love?

It should have won a lot more based simply on the faces the other members of the band do in it. Because it’s not just David Lee Roth who gives it some great face, oh no. There’s also bassist (and the band’s secret weapon thanks to his angelic vocal harmonies) Michael Anthony, whose neck at one point is at this angle:

But who also gives it some absolutely glorious bassface throughout:

People often ask: ‘What is the secret to a good bassface? How do you pull it off? Is it simply any face you pull while playing a bass?’

Not every bass face is a bassface. You just know it when you see it.

Even Alex Van Halen, thundering away behind his gigantic drumkit and thus mostly out of reach of the camera, gets in a great face here and there. The best parts of Alex’s faces are—and I mean this without a shadow of irony—his perpetually sweaty upper lip. 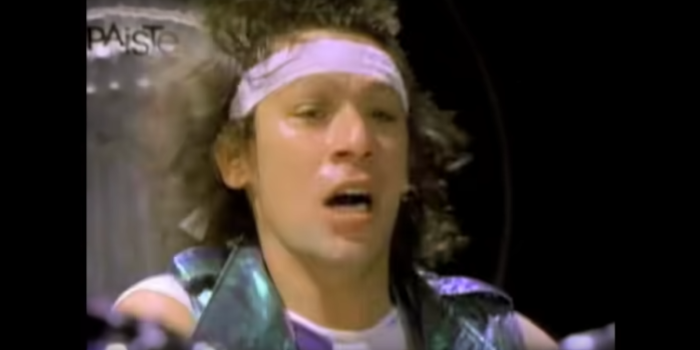 Why? Because it’s real, man. Alex is thundering away up there for real. The lip syncing of the ‘Jump’ video may be one level below potato quality, but the performance captured is real enough. Even when the guys are goofing off and messing up notes or interrupting each other playing, Dave.

Truth be told, though, there is one reason above all why the ‘Jump’ video ascends to the ranks it does.

Yes, Dave Lee Roth’s sultry faces are a part of it.

As is Michael Anthony’s bassface.

But none of that would be enough to power it into the stratospheric levels that occupies.

Oh no, that’s down to the nitro boosters given to it by the faces made by the man himself.

You don’t get the first one until almost a minute in, but when it does hit, it opens the floodgates. 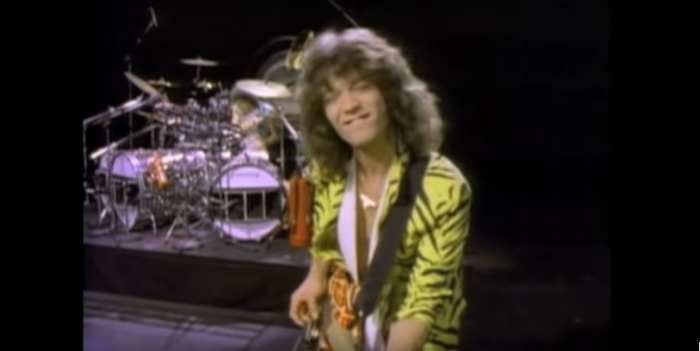 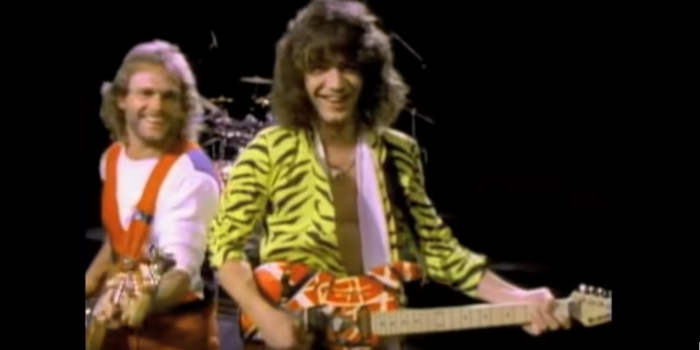 I don’t think I’ve ever seen a more genuine smile in any music video ever. It’s cheesy and completely sincere and perfect. It even gives Rudolf Schenker a run for his money.

It's a scary confusing world but I think I've finally figured out my life's goal: To be as happy, for just one day, as Rudolf Schenker has been every fucking minute of 50 years of playing in the Scorpions pic.twitter.com/nPYaWltB9x

‘Jump’ is a video that runs on face power. All the lads from the band give their all to this ridiculous stage goof and it wouldn’t be the same without any of their wonderful gurning, but it’s Eddie’s pure sunshine beam of a smile that really cements the video’s place in the hall of all time greats. We miss ya, Eddie.

← What The UEFA Euro Cup Has to Do with The Stock Price of Coke and CPR Classes | 'Lupin Part 2' Review: Sherlock Holmes, But With Joie de Vivre →