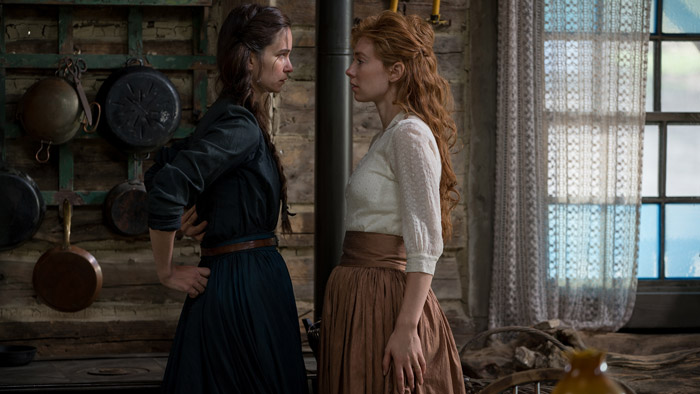 Review: How 'The World To Come' Does Lesbian Period Romance Dirty

The last few years have brought a blossoming of sensational lesbian period-romances, including Carol, Wild Nights With Emily, The Handmaiden, Portrait of a Lady on Fire, and Ammonite. Within these vintage settings, homophobia often plays as an obstacle for a forbidden love. Formal dress and billowing gowns create a sense of romance and restraint that makes every stolen touch feel titillating, and every flash of flesh fiercely charged. Yet as this subgenre has paved a path for representation, it’s created a frustrating rut where most of its sapphic lovers are played by white (and often straight) actresses. Such dogged repetition is bound to spawn uninspired imitations, and so here comes The World To Come.

Directed by Mona Fastvold, The World To Come sets its tale of lesbian love in the 19th century American Northeast, where farming is a brutal business that hardens hands and hearts alike. Katherine Waterston stars as Abigail, a farmer’s wife who works her fingers to the bone but longs for something that satisfies her soul. Her husband Dyer (Casey Affleck) is content to toil and tinker with little machines, but she dreams of intellectual pursuits that will allow her mind to escape their frosty cabin. So, she scribbles poetic musings in a journal, while he uses his to chart their field’s yields. In short, it is a hard and lonely life. That is until Tallie comes onto the scene.

Vanessa Kirby, whose currently getting Oscar buzz for her lead turn in Pieces of a Woman, rides into town with her own sour husband (Christopher Abbott). With a mane of wild red locks and a mischievous smile, she instantly fascinates the introverted Abigail, and the two become fast friends. Playing hooky from her work at home, Tallie visits daily to regale Abigail with stories, shower her with gifts and eventually kisses. Their men may be grumbling walls of machismo and coarse beards, but they’re not stupid. Tensions rise and the audience is left to wonder if this might go the way of Carol or Brokeback Mountain. Yet, despite this setup for suspense and a critically heralded cast, The World To Come offers little excitement.

The script by Ron Hansen and Jim Shepard leans hard on Abigail’s diaries to tell us of her desires. This leaves Waterston with little to play onscreen but muted wonder or distant despair. Then, her voiceover work feels sleepy, as if Abigail is speaking while trying not to nod off into a nap. Kirby; meanwhile, goes Manic Pixie Farm Girl, flashing winsome charm as if she’s a fantasy through and through. Sadly, these beautiful women share no spark. They are porcelain dolls, lovely but cold and stiff as they clink together for a kiss. Stodgy longing makes for an unremarkable romance.

Beyond this bond, the world of The World To Come is achingly undeveloped. In voiceover, Abigail laments of her childhood and mother, but no flashbacks will appear to sweep us to any other space. The size of this community is vague; the only characters granted dialogue are the husbands and wives. Only the latter are gifted any depth. Both Affleck and Abbott are given stock characters of Bad Husband, each defined by a singular emotion. So, one steadily sulks in Sad Boi mode while the other grumbles in varying degrees of rage. Initially, this suggests there might be rich ground to till here, promising conflict, heartbreak, and possibly violence. Yet neither the screenwriters nor the director digs in, leaving the romance to fall fallow.

It’s just wrong that such a story be so listless.

Following its Sundance 2021 premiere, The World To Come will have a theatrical release on February 12, then a digital release on March 2.

← The Ending of Denzel's 'The Little Things' Explained | 5 Shows After Dark: 'The Expanse' Season 5 Finale, 'Fake Famous' on HBO →