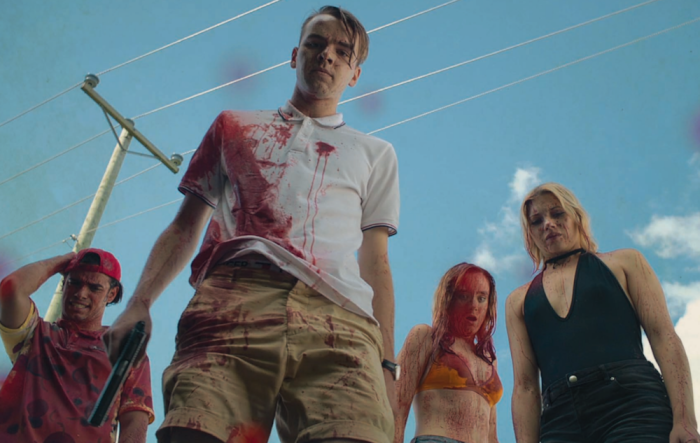 'Game of Death' Review: All Fun And Games Until Your Friend's Head Explodes

Imagine if Jumanji and Cabin In The Woods had a blood-thirsty baby. But it’s a baby, so it’s still pretty stupid. That’s the premise of Game of Death in a nutshell. A pack of partying teens let loose in a vacation home, drinking, drugging, boning, and flirting with incest, before stumbling across an eerie board game that’ll unhinge reality and risk their lives. Sitting atop a stash of obsolete but once omnipresent devices, like a VCR, a Super Nintendo, and a battered box of Trivial Pursuit lurks the titular game, which lures them in with its dark promise of twisted fun. Such a shame, directors Sebastien Landry and Laurence Morais-Lagace can’t deliver on the promise of this demented premise.

Conceived as a web-series and re-edited into a feature film, Game of Death won’t bore you with the journey to this pool-boasting hub for teen debauchery. Hell, it barely bothers to carve out the characters before it starts bursting their brains into bits. From vertically-shot cell phone videos, Game of Death sets up stereotypes with ruthless efficiency. This guy’s a nerd, you can tell by his scrawny frame, and the dick drawn on his face. This guy’s tough, note the newly inked tattoo. This girl is sweet, because she’s got braided pigtails. This girl is “bad,” she wears a black bathing suit and a sneer. There’s also the stoner, the bikini-clad Final Girl, and the preppy creep who lusts after his baby-goth sister, and dresses like he’s casually cosplaying Funny Games, complete with the white polo shirt, dress shorts, Hitler youth haircut, and blasé attitude toward murder.

Thinking it’s just a silly game, the teens gather up and accidentally offer their blood to the board, condemning themselves to a deadly countdown. The digital display in the middle of a plastic skull reads “24,” but it’s not until one of their group loses his head that they learn the meaning of the number. 23 more deaths are demanded. Kill or be killed. So, the psycho brother suggests the teens go hunting in town.

Assuring a bodycount of 24 from the kick-off of act two, there’s ambition aplenty on display. But as soon as the blood-drenched kids flee the house, the tension is lost as the plot devolves into racing about for random victims. The pace is impaired by the confusing countdown that seems to trigger at random, as opposed to a more steady, suspense-building option. Then there are scenes that linger on and on without apparent purpose. The point is made, but still we’re stuck here. Whether it’s shots of a manatee documentary playing to an empty room, or an aggressive oral sex scene, or a bitey make-out session that’d be uncomfortable even if it weren’t incestuous, I began to wonder if Game of Death was stalling to reach its barely feature-length screen time of 73 minutes. My suspicion seemed confirmed with every gamer’s death, as each is accompanied by a gawky cell phone video of them posing or playing to the camera in a more innocent time, just a few precious hours before. Perhaps it’s meant to play as a mournful reflection on what’s been lost, but frankly it feels like padding.

Landry and Morais-Lagace also stuff their thin premise with allusions to other murderous movies. A sexy upgrade on spin-the-bottle spurs a girl to spin a lap dance that pulls some sultry moves from Cabin In The Woods. Their most eager killer’s look is clearly a nod to Michael Haneke’s Funny Games, about posh teens who terrorize a vacation community for fun. The third-act’s hospital-set finale, with a pair of pumped up killers gone full spree, could be a nod to The Frighteners or Natural Born Killers. But the most obvious—and out of place—allusion is the inexplicable appearance of a chipper, middle-aged female sheriff with curly light brown locks. Jolly and unprepared for the hell that awaits her, she’s clearly a nod to Frances McDormand’s plucky Marge Gunderson from Fargo. But around about the time this charming cop starts belting out a made-up theme song for Pizza Hut, the inclusion goes from curious to utterly confounding.

Also looped in to this zealous mash-up is a superficial commentary on video games (the kids repeatedly compare their carnage to those in violent games), and an out-of-nowhere animation montage that works in a slew of different styles to race through the big slaughter sequence. Both reek of desperation, one trying to inject some social commentary into their teen-centric tale, the other avoiding the work of a full-blown onscreen massacre. Early on, Game of Death leans on graphic and gory practical effects to sell their kills. But by the end, things get lazy, or perhaps budgets got low. Either way, the thrill is gone.

Sometimes less is more. Game of Death piles on pop culture references, gore, and gimmicks in hopes of delivering a wild midnight movie. There’s some ghoulish fun to be had here, but with vague characters, a thin plot, and tension bled out by all the running about, this horror flick becomes more messy than menacing. It’s easy to imagine, a leaner, meaner version where instead of chasing down any random body for their count, the players were forced to turn on each other. Resentments, loyalties, and secrets could have bubbled to the surface, bursting with cutting character moments. But as it is, Game of Death is more schlock than shock, and more frantic than fun.

Game of Death is avaiable on VOD and digital.

← A Brief Status Update on Where We Stand on a Covid-19 Vaccine | Review: 'Dirt Music' is Mostly a Beautiful Tourism Ad for Australia →