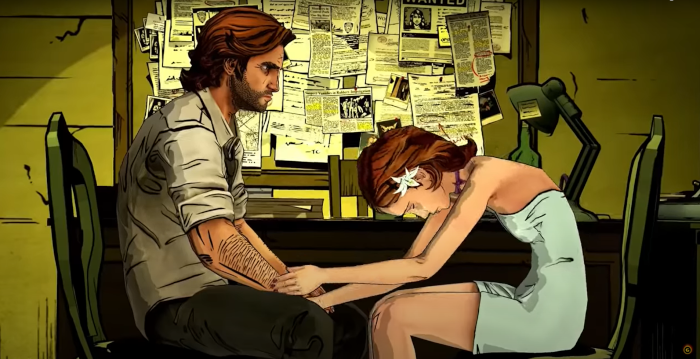 Telltale’s 2013 game The Wolf Among Us was a critical and console gaming community darling, a choice-based adventure game that altered the story based on the player’s decisions and quicktime events. It was a winning formula they developed in 2012 with The Walking Dead, akin to the classic Choose Your Own Adventure novels pioneered in the 1980s. Buoyed by its successes in the genre, Telltale went on to create more licensed games from other IPs, including Borderlands, Game of Thrones, Guardians of the Galaxy, and Batman. Victims of their own success and corporate greed, the company’s cultural embrace of “crunch time” exhausted workers while focus on existing IPs imposed creative limitations. Telltale folded in October 2018 and most of its assets were purchased by LCG Entertainment. The studio name was revived in 2019 and former staff were offered freelance positions under LCG, an announcement that was met with significant pushback.

The Wolf Among Us is based on and serves as a prequel to Bill Willingham’s 2002 Vertigo graphic series, Fables. Creatures of folklore and bedtime stories, the Fables were fairyland refugees who fled their conquered homeland in favor of colonial America. The story takes place in 1986 New York City, the hub of Fable folk. Players took on the role of Bigby Wolf — aka the Big, Bad Wolf of legend — who serves as Sheriff of this hidden community. Feared and distrusted for his legendary bloodlust by most characters, Bigby must hunt down a serial killer cutting his way through the more vulnerable members of society. The cast includes Snow White and her sister Rose Red; Ichabod Crane as the burg’s mayor; the Tweedle brothers, Dee and Dum; Beauty and her boyfriend the Beast, and many others. Players spent 5 episodes following various leads to track down the killer and expose a larger threat to the Fables. There’s a lot of investigation, putting clues together and making educated guesses, as well as action sequences driven by quicktime-style button selections. It’s a great experience for those who prefer their games story-driven, rather than frantic button mashing.

The sequel, appropriately titled The Wolf Among Us 2, was announced at The Game Awards in 2019 by LCG, under the newly reformed Telltale banner. Former employees of Telltale, now under Adhoc, returned to write the game, and the main voice cast is also back. Few other details have emerged since, but the livestream scheduled for 1PM EST, 10AM PT today should shed some light on much of the mystery, including a full trailer and hopefully a release date. The entire game is being developed at once rather than as separate episodes, so it’s possible we’ll receive the whole thing at once this time around. The livestream will be available on Twitch and Youtube. If you played the original, share your impressions below!

← 'Reacher,' 'Murderville,' 'The Woman In The House...," And More On Podjiba! | Zac Efron Is Charlie McGee's Daddy (and Yours) In Peacock's 'Firestarter' Remake →


Image sources (in order of posting): Youtube, The Wolf Among Us trailer