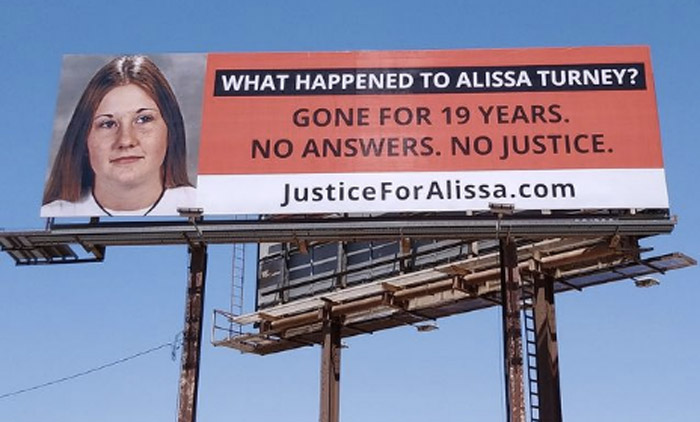 For 19 years, Sarah Turney has sought justice for her half-sister Alissa, who vanished without a trace in 2001. Now, Alissa’s alleged killer is facing charges, thanks to TikTok.

As TikTok’s popularity blew up during the pandemic, Sarah hoped making videos about her sister’s missing person’s case would put public pressure on police. Sarah wasn’t just convinced Alissa hadn’t run away. She believed she was dead, and that their father, Michael Turney, was the killer.

Let’s go back to the day Alissa disappeared.

It was May 17, 2001. Alissa was 17; Sarah was 12. It was the last day of Alissa’s junior year at Paradise Valley High School in Mesa, Arizona. She was stoked about summer and had plans to go to a friend’s graduation party that night. But Alissa would never show. The last person who saw her was her stepfather, Michael Turney, who’d adopted her after her (and Sarah’s) mother, Barbara Stahm, had died of cancer nine years before.

This made Michael a key witness for police, and one might assume a suspect.

He told the cops that he’d picked Alissa up from school at 11 A.M. and took her to lunch. There, the two got into a fight about Alissa wanting more freedom. When they got home, he said she angrily stormed off to her room. He said that was the last he saw her. From there, he went to run errands and picked up Sarah from a field trip at 1 P.M. When the father and his biological daughter got back to the house, a note awaited them claiming Alissa had run away to California. That’s when Michael called the police.

For those keeping track, Michael’s whereabouts from 11 A.M. to 1 P.M. —the time where his stepdaughter went missing— had no witness verification. At the time, the police didn’t even interview Alissa’s friends. Yet, the cops decided there was no foul play involved and wrote Alissa off as a runaway.

This didn’t make sense to Sarah. She recalled how Alissa’s room—which was always pristinely tidy—was in wild disarray. Plus, Alissa had left behind her cell phone, clothing, makeup, jewelry, and her car. Also, Alissa hadn’t withdrawn any money from her bank account. Six months into her disappearance; however, Michael did, transferring all her savings into his account. Still, Sarah didn’t suspect her father, a former sheriff’s deputy and electrician, at least not right away. After all, he said that Alissa had called from California to say she was okay.

In a People interview that went live yesterday, Sarah, who is now 31, recounted this phase of the investigation, saying, “I wasn’t worried. I was under the impression she was going to be back. I don’t think her being gone forever was anything that ever crossed my mind.”

Even as speculation emerged that Michael may have had a hand in her sister’s disappearance, Sarah shook them off, even defending him. Perhaps in part because he was the only living parent she had. However, her own investigation brought her to the same conclusion her five siblings shared: Michael killed Alissa. When she covertly recorded a conversation with her dad about what happened to Alissa, Michael said, “Be there at the deathbed, Sarah. I will give you all the honest answers you want to hear.”

In 2006, the investigation got fresh life when serial killer Thomas Hymer issued a false confession. THIS was when detectives actually interviewed Alissa’s friends and boyfriend, who said that Michael was verbally abusive and alleged he was sexually assaulting his stepdaughter. In 2008, Michael refused to let police search his home and denied the cops access to the letter that Alissa had supposedly left behind. He instead offered a photocopy of it. When the police did get a warrant to search the home—7 YEARS after her disappearance—they found dozens of homemade bombs, two silencers, and—People reports—“a 97-page manifesto detailing his plot to commit mass murder at the local headquarters of the electrical workers union.”

This is when the authorities learned Michael had surveillance cameras INSIDE his home and recorded all phone calls coming in or out of the house. A 2008 police report declared, “Michael Turney has exhibited an apparent obsession with his step-daughter, Alissa.”

He pled guilty for the possession of unregistered destructive devices and served 7 years in prison; Michael still faced no charges in Alissa’s case.

Seeking to uncover what became of Alissa, Sarah has used various means of social media to help raise public awareness and search for tips. She made a Facebook group, an Instagram account, and a website called “Justice for Alissa.” She did press interviews whenever she was able, and tried to get true-crime fans and web sleuths involved by attending CrimeCon. She started a podcast, Voices of Justice. Then, Sarah created a TikTok account, where she laid out her own investigation in video after video, which have millions of views.

I’m trying to tell Alissa’s story in 3, 1 minute increments on TikTok and it’s heartbreaking. Why I even have to do this is beyond comprehension. When is this going to end? #justiceforalissa #justiceforall pic.twitter.com/k70RK4FmpK

She also made videos that played to TikTok memes and replied to those who mocked her efforts, all with the goal of getting Alissa’s story to a wider audience.

When they don’t realize you have perfected the art of loving haters and turning it into more awareness for your missing sister. Thanks for the 11k views and counting my love. 😘 pic.twitter.com/YxAurwDFUH

This might seem strange, perhaps especially to those unfamiliar with the ways of TikTok. But it worked. In August, a Maricopa County grand jury charged her stepfather with one count of second-degree murder. By this time, Sarah had a million TikTok followers.

The case of Alissa Turney is not yet closed, but Sarah is “optimistic” that Michael will—at long last—be convicted. However, this doesn’t mean she’s done with true-crime TikTok. Sarah’s built a wide-reaching platform to draw attention to unsolved cases, and that’s exactly what she is doing. “I feel this is my calling now.”

Izess is 16 & missing from Clarksville, TN. This is her mother. Please share. She’s doing everything she can to raise awareness. #missing pic.twitter.com/sYHA3iFCa1