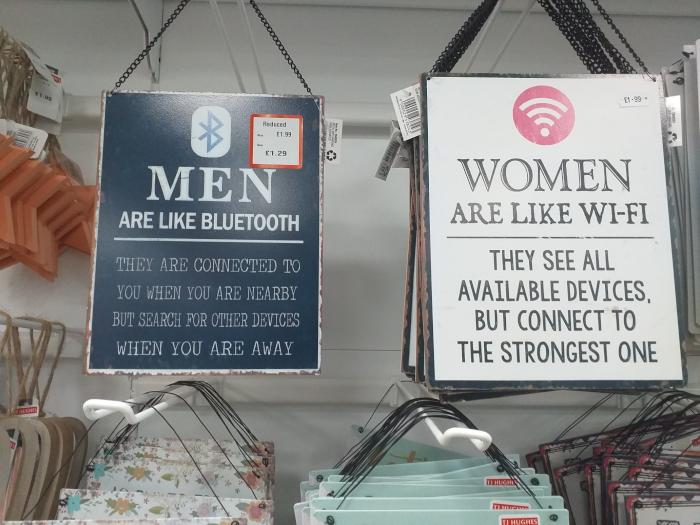 Rosé Incels: Trying To Figure Out The Modern Day Aesthetic of Retro-Sexism

While in a local discount homeware shop, looking for pillows, I came across these signs. I was, understandably, amused and horrified, so I quickly snapped a photograph, posted it to Twitter, then went about my day.

The tweet quickly blew up and social media responded accordingly, mostly with well-timed snark and frequent reminders that this is not how Bluetooth or Wi-Fi actually works. This wasn’t the first time I’d seen oddly precise decorative items like this. Browse any discount shop and you’ll fine shelves of such creations (typically heavily reduced from their original prices). During a nightly Googling for flat decoration ideas, every targeted ad seemed to offer me the same six slogans on black lettering wall stickers, all either blandly encouraging - live, laugh, love! - or unnervingly specific in their relation to my life. Such are the joys of the almighty algorithm.

Many of these shirts are auto-generated to cover as wide a range of ideas and audiences as possible, which can lead to some major slip-ups, such as when one company sold t-shirts that said ‘Keep Calm and Rape a Lot’ on Amazon. Zachary Crockett of The Hustle wrote about this market in 2018 and how ‘atomization of culture and business’ in this example has made it easier for unscrupulous companies to flood the market with unchecked products. The true beauty and horror of the internet are in their ability to provide you with items that exemplify everything you are that you’d never want to own, even if your life depended on it. Of course, that would be a reductive statement to make because clearly there are some customers who are delighted to own hoodies with endless paragraphs of text that describe their personality and their secret desire to own or be owned by their spouse.

It’s curious to see the slogan t-shirt come back into fashion in the social media age. Many a family influencer can be found on Instagram with each child decked out in matching clothes emblazoned with phrases about how wonderful their parents are or what darling angels/devils they can be. Pregnant women are proudly packaged as baby vehicles with ‘milk bags’ ready for feeding on many an Etsy shirt. Pompous men can let the world know how ready they are to kill should anyone lay a hand on their ‘queen’ with hoodies in a variety of colors. Men are from Mars, women are from Venus, but these items are all hellishly the creations of earth. Heterosexuality has never needed an excuse to run amok, but there’s something especially puzzling about this recent aesthetic development.

Who are these for? Why has this super retrograde, 1970s old-men's club "my mother-in-law is a bitch" style rhetoric become a desired aesthetic?

Misogyny thrives on humanity’s willingness to write off its most egregious slurs and agendas as jokes. It allows for the delusion of camaraderie to mask its harshest aspects not only as acceptable but something one must engage with in bad faith in order to survive. It’s not enough to ignore the retrograde conversations - the ones where men refer to their wives as ‘b*tches’ - you must laugh along and encourage the toxicity to flourish. If we pretend that everyone is in on the gag, that we know those people aren’t really sexist and so it’s okay to stick to the status quo, then we are shielded from harm. That’s the lie we’ve readily swallowed, mostly because the alternative is often so emotionally draining and the labor required is typically derided. Nobody wants to be a drag.

It’s a smothering environment to try to survive in but one made all the more insidious by our readiness to commodify it. T-shirts that allow men to brag about their ‘b*tch wife’ and quaint kitchen signs about a woman’s semi-murderous husband can be positioned as pseudo-ironic if you squint your eyes hard enough. It’s a mentality made all the easier to swallow thanks to graphic design and lettering choices so baffling that you can’t help but wonder if they’re deliberate acts of trolling. There’s an obviously discomfiting element to these shirts, so loaded with text that reading the entire message requires a long minute of staring at someone’s chest as they passively stand and wait. Why make only the item itself uncomfortable when the very act of reading it (as so much text demands) can be equally as socially excruciating?

The messages of these garments are supposed to be one of chaotic wedded bliss, the kind of sitcom sweethearts dynamic that’s fuelled many a Thursday night on NBC (and the class dynamics suggested are heavily evident). They drive each other crazy but they sure to love one another. Mostly, I look at such items and think about how utterly miserable they are. Who is happy to be described in such a wholeheartedly b*tchy way by someone they love? Why embrace such smothering stereotypes and position them as aspirational? Does the crushing and archaic simplicity of these notions of gender and sexuality hold such a thrall over people that good taste and common sense must be sacrificed?

These horrid signs, the ugly hoodies, and so on are merely part of a wider socio-economic context that thrives on a black and white understanding of both people and branding. Think of baby-gros that declare newborn boys to ‘love boobs, just like my daddy’, or wedding cake toppers where the bride is dragging the groom to the altar, or the entire gut-churning practice of gender reveal parties. It’s easier and cheaper to turn decades of structural inequalities into catchphrases to hang above your desk. Acknowledging they exist is enough labor for some and a get-out-of-jail-free card for being complicit in the messages they perpetuate. Why only be tacky when you can also let the world know how much your gun-totting husband loves his b*tch wife?

← Get Your Damn Flu Shot | Next on 'A Million Little Things' Recap: Is Having Sex with the Recipient of Your Brother's Heart Incest? →