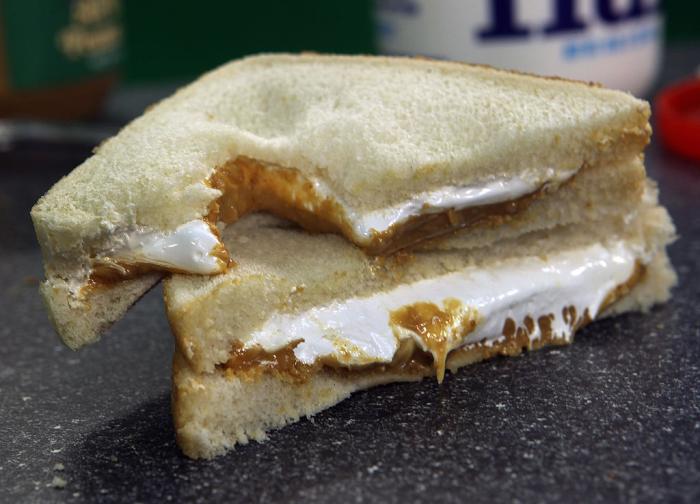 Like many of my generation, most of my memories of paternal affection come from sitcoms rather than personal experience. There wasn’t much closer at hand while growing up in the ’80s. My dad was never abusive but also wasn’t emotive unless angry or drunk, often at the same time. Most childhood memories of our time together involve lots of farm chores and shouting. Maybe that’s why I’ve repressed so much of it. There are only so many times I can revisit 30-year-old memories of terrible bowl cuts, hand-me-down corduroys, and getting yelled at for shoddy cordwood stacking before dying of internal shame. Don’t get the wrong idea; most of my childhood was happy. I was fortunate enough to spend the bulk of it either reading or exploring the great outdoors, and I am very grateful I grew up before social media. My parents loved me, I had a phenomenal grandfather, and while we were poor I rarely worried about going hungry.

Most of the good memories revolve around food. Country food, mostly. Hot dogs. Pot roast. Heaps of pasta. The much-maligned and misunderstood brown bread in a can, a New England take on the British steamed pudding and how poverty-stricken Bostonians used up leftover cornmeal, wheat, rye, and molasses back when white bread was only for the wealthy. And, best of all, the fluffernutter, a Massachusetts invention dating back to the early 20th century. American marshmallow creme, or “fluff” as it’s come to be called, was invented back in the late 20th century in Somerville, Massachusetts before being sold to candy makers in Lynn. There were several similar concoctions over the years, including an Arabic version dating back to the 10th century. European versions involved boiling roots of the marsh mallow plant and then whipping the results with sticks to work air into the mixture and give it its distinctive texture. Modern marshmallows are made with corn syrup and sometimes gelatin. Fluff, containing corn syrup, sugar syrup, and egg whites — plus vanilla — more closely resembles a stable meringue.

Whatever the ingredients, it’s absolutely delicious. If you’ve ever toasted a marshmallow over a campfire and pulled off the caramelized exterior then you’ll know what to expect; it’s soft, pillowy, creamy, and ridiculously sticky, even at room temperature. It’s the perfect accompaniment to heavy, salty peanut butter and was introduced to the world via Durkee-Mower advertisements in 1918. The same company is the primary producer of marshmallow fluff in the country and still manufactures the delicious goo in Lynn, Mass. It’s a childhood staple north of Connecticut and remains a favorite for New Englanders and even many New Yorkers, despite their flaws. Health nuts and food snobs dismiss it as one-note culinary garbage, too sweet and almost entirely lacking in nutritional value. They forget that cold winters demand extra calories, that peanut butter provides protein a lot of picky children lack, and that poor people deserve special treats now and then too.

Sandwich construction is straightforward and deceptively simple. Two slices of inexpensive, soft bread so white it belongs on the set of Downton Abbey. Smooth peanut butter, not all-natural. There’s enough lubricant outside the sandwich that the last thing you want is greasy peanut butter on the inside. Fluff, obviously. The Durkee-Mower brand is still the most common, at least in New England, and easily purchased online. Kraft Jet-Puffed is an acceptable substitute should actual fluff be unavailable, but it’s worth tracking down the original. Put peanut butter on one slice. Put fluff on the other. Smash them together. Congratulations; you now have a fluffernutter.

But even what we think of as perfection often leaves room for improvement. And so on a rare autumn Saturday where inclement weather meant there was no wood to cut I stood in our dimly-lit kitchen and watched with a healthy dose of skepticism as my father heated a cast iron pan, smeared soft butter on both sides of my fluffernutter sandwich, and grilled that sucker to a perfect golden brown. He flipped it out onto a plate, handed it over, and said “You need a fork.”

How was it? It was the most delicious hot mess I’d ever tasted. The bread was crisp on the outside but otherwise still soft and just on the right side of greasy. The peanut butter and fluff achieve the consistency and temperature of lava, and care is required for the first few bites lest the molten confection blister the roof of your mouth. A fork is necessary unless you want to wear most of the sandwich’s contents. It’s so rich and soft it demands a textural counterpoint, for which potato chips and ice-cold milk are the perfect accompaniment. I sat with my brother and father at the kitchen table in relative silence while the dry heat from the woodstove held off a fall afternoon so heavy with mist it was impossible to see more than a few yards. It was calm. It was quiet. It’s a memory I’ve hung onto for thirty years, despite the fading of so much else. I can scarcely remember holding my kids as infants but that sandwich, that shared moment, is still as fresh in my mind now as it was that day. 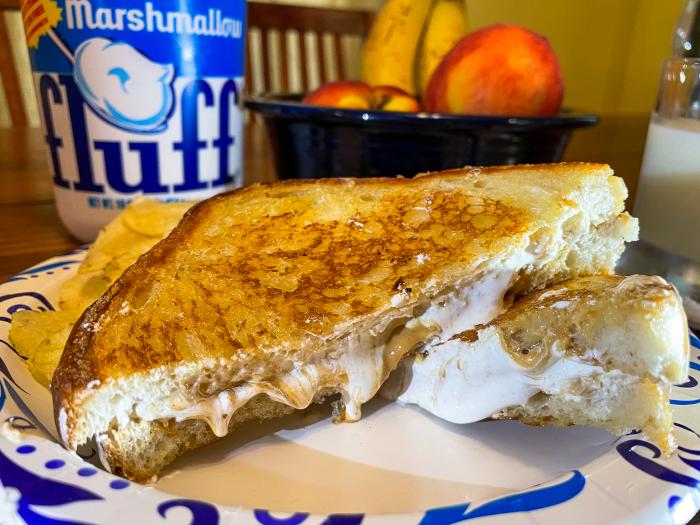 It’s important not to treat your fluffernutter like a grilled cheese. A proper cheese sandwich requires heat low enough to melt the interior before the outside scorches. Giving a fluffernutter that much time in the pan turns its main ingredients into napalm that leaks from the sandwich onto the pan, the plate, clothes, and nearby pets. Your pan should be hot enough to turn the bread’s exterior into golden-brown deliciousness in 30 seconds per side. Butter the bread, not the pan. Don’t crowd the pan with too many sandwiches or you’ll just make a disappointing mess, as I’ve learned the hard way several times. Toast two at a time, max, and let them sit on a wire rack in a warm oven while you toast the last two.

My daughter tested positive for a peanut allergy as a baby and so the humble legume has been all but banned in my house for the last decade. But careful testing with a doctor’s assistance proved the allergy is a thing of the past. Not only is it safe for her but she loves peanut butter, not a guaranteed outcome when a person waits so long to try it. Finally, I was able to introduce my kids to a cherished childhood experience. I improved on the original like my father before me with my own little tweak; if I have no soft butter, I spread a thin layer of Hellman’s mayonnaise across the exterior of the sandwich. Yes, mayonnaise, despite what you haters and Miracle Whip weirdos think. It spreads more evenly and you need only a few teaspoons for each sandwich. It has less than half the water found in butter, so sandwiches toast quickly and more evenly. It also adds a faint tangy note that balances out the sandwich’s intense sweetness.

When they took their first bites, the looks of bliss on their faces were worth the wait and the kitchen disaster that I’d created. It was an instant hit, and knowing I’ve got another fast, dirt cheap meal in my back pocket for the days when I just can’t be bothered to cook a real meal is a bonus.

I have no illusions about my qualifications as a parent. Like my dad, I spend too much of my life irritated, and I don’t like how it makes me respond to my children. The bad habits I learned as a kid and reinforced by decades of poor impulse control are tough to fight. But I’m teaching my children how to defuse their own anger and frustration before it boils over, using the same techniques I learned too late. I try to provide the support that felt so rare during my childhood. Every day I try to be a little better. Often I miss the goal. But every little bit helps. If nothing else, I can leave behind memories of time spent together in the kitchen, making something new and special that’s just for them.


← Amber Heard's Story is My Story | 'Ms. Marvel' Recap, 'Crushed:' How Kamala Khan Got Her Groove In The First Place →