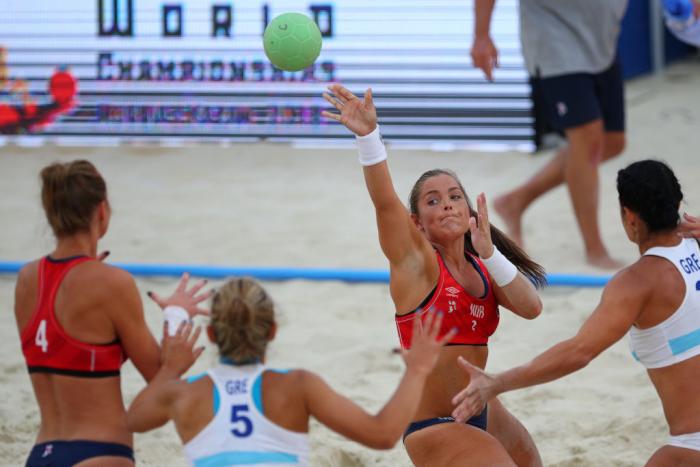 They seem nice. Professional. Capable.
And obviously horrendously over-dressed.
Which is why they’ve also been fined £1,300 for not showing enough of their bums.
According to a story in Sky News, the Norwegian team’s opting for shorts over bikini bottoms in their game against Spain in Bulgaria meant that the esteemed people over at the European Handball Federation simply had to sanction the team to the tune of roughly £130 each.

The European Handball Federation’s judgment was unequivocal: The Norwegian team’s choice of shorts was a case of ‘improper clothing’ that was ‘not according to the Athlete Uniform Regulations defined in the IHF [International Handball Federation] beach handball rules of the game’.

The global regulations for women’s uniform for beach handball state that ‘female athletes must wear bikini bottoms […] with a close fit and cut on an upward angle toward the top of the leg.’ Male players must wear vest tops and shorts.
Seems totally fair.
The Norwegian Handball Federation issued a statement in response to the fine levelled at the women’s team, saying: ‘We at NHF stand behind you and support you. Together we will continue to fight to change the rules for clothing, so that players can play in the clothes they are comfortable with.’ Similarly, Norwegian sports minister Abid Raja denounced the penalty, calling it ‘completely ridiculous.’

According to a report in CNN, the Norwegian women’s team coach expected their decision to be met with a fine, as they had been pushing back against the imposition of bikini bottoms for a number of years. The coach, Eskil Berg Andreassen, added that quite aside from being nakedly sexist, the bikini rule is also having a deleterious effect on the sport as a whole, potentially discouraging many women from pursuing it. ‘Maybe they will move away from the sport, and choose another sport,’ said Andreassen. Andreassen also highlighted the racist nature of rules such as the IHF’s bikini rule, saying that there should be a spectrum of choice available to women players when it comes to uniform, with outfits that cover ‘most of the body’ being an option so as to allow players from Muslim-majority countries to compete at the same level.

Women are controlled eitherby being forced to cover or forced to uncover. Most people only recognize these social pressures when they’re in “other” cultures. But they’re happening everywhere. https://t.co/QjtjijOoDu