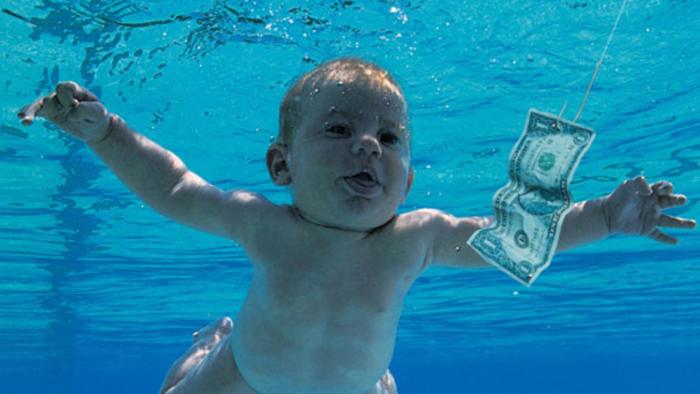 You ever have one of those mornings when you wake up and realize you’re surrounded by idiots and opportunists? They’re EVERYWHERE these days. The list is long and varied, but today’s Capo is Spencer Elden. (Long deep sigh.) If the name means nothing to you that’s OK. It probably shouldn’t. Thirty years ago he was the nameless baby featured on the cover of Nirvana’s breakthrough album, Nevermind. You know, this one. #3 on Rolling Stone’s Best Album Covers Of All Time

Every few years someone tracks Spencer down and convinces him to pose for a “Where’s the Nirvana Baby Now” photo. Back in 2015, he told The Guardian that, although he had no memory of the experience, it was a good thing for him and opened doors for him as an artist. He even credited that shot for the chance he had to work with Shepard Fairey for five years. All because he was That Baby.

Coasting on unearned fame and having a killer pick-up line isn’t enough for our man Spencer anymore. Yesterday TMZ reported, and Pitchfork confirmed, that he’s suing Kurt Cobain’s estate and the surviving members of Nirvana for child sexual exploitation. He’s claiming that the photo constitutes child pornography, saying that his parents never signed a release “authorizing the use of any images of Spencer or of his likeness, and certainly not of commercial child pornography depicting him.” His lawyer claims that the dollar bill in the photo transforms an innocent photo of a naked baby into a photo that suggests the baby is a … sex worker.

Pardon me while my brain explodes.

Elden has, out of nowhere, decided that having a famous baby picture has caused him lifelong damage. (Was it brain damage? Maybe he hit his head in the pool.) And now he’s trying to milk the band for $150,000.

But wait, what’s this? I’m being told that Spencer Elden is just a giant baby who got his feelings hurt one time…

That can’t be real though. Right? Oh, it is.

I hate everyone. I mean, seriously? Shut up, dude. Go complain to your parents, who were friends with the photographer. Tell Mommy and Daddy that you have the sads because Dave Grohl is too busy for your sh*t and ask them for a better allowance.

To recap, Spencer Elden made his parents an easy $200 while he took a swim as a baby. When he realized that wasn’t all that important in the grand scheme of things to anyone but himself, he decided to choose violence and basically extort a famous musician (because you know Grohl is going to be the face of this thing) instead of arguing with his parents about it over holiday dinner as a normal person would.

← Mandy Patinkin Shares a 'The Princess Bride' Memory that Will Make You Ugly Cry | Here's the First Look of Dexter's Son, Harrison, in the 'Dexter' Revival →